Stocks Reach New Highs. Here’s What To Do Now…

As with most proverbs, this one should not be taken literally. Ostensibly about the weather, the wisdom of this saying goes much deeper: it shows a cause-and-effect relationship, with an inevitable conclusion that good things often follow (and even result from) things less pleasant.

Case in point: The market’s first-quarter rally that was preceded by fourth-quarter volatility.

And what a rally it’s been… The S&P 500 index has already rebounded 17% year-to-date, and it’s now trading just points off its all-time highs. These are the levels many observers expected by year-end 2019, not by April, and it took many by surprise that it has only taken this market four months to deliver 12 months-worth of returns.

But is it a good or a bad thing that the market has rallied this much this fast? Many investors, including large institutions and mutual funds, remain on the fence, uneasy about the gains and questioning whether or not the rally can sustain itself.

Investors who look at the market’s technical indicators were watching to see whether the S&P 500 index would break through its all-time high. Now that it has done just that, or so the thesis goes, it’s full steam ahead. Had the market failed to pierce that level, well, we would be in for a bumpy ride in the near term. But I wouldn’t worry too much about this or other technical indicators. Rather, I want you to take a look at the reasons underlying this latest market action.

Why The Market Is Rallying
One reason the markets are doing well is the economy. It’s not strong enough to ensure the continuation of tightening monetary policy by the Federal Reserve, but it’s not weak either. That’s a recipe for continued strong earnings. Adding to the positive picture is inflation, which remains relatively low. This is good news by itself, and it also virtually ensures, again, that the Fed will not embark on the hiking course for now.

According to the latest Fed’s so-called Beige Book — an eight-times-a-year assessment of the domestic economy — economic activity in the country remained strong in March and early April, with most of the 12 districts reporting growth at a similar pace as the previous report, and a few districts reporting some strengthening.

Moreover, a new set of economic stimuli in China makes the case for equities elsewhere in the world stronger. (Trade war issues aside, China is the fastest-growing major economy in the world, and if it were to slow down, others would feel the effects as well.)

Stocks Aren’t As Expensive As You’d Think
What about the market’s valuations? Surely the rally must have resulted in equities getting more expensive, right? 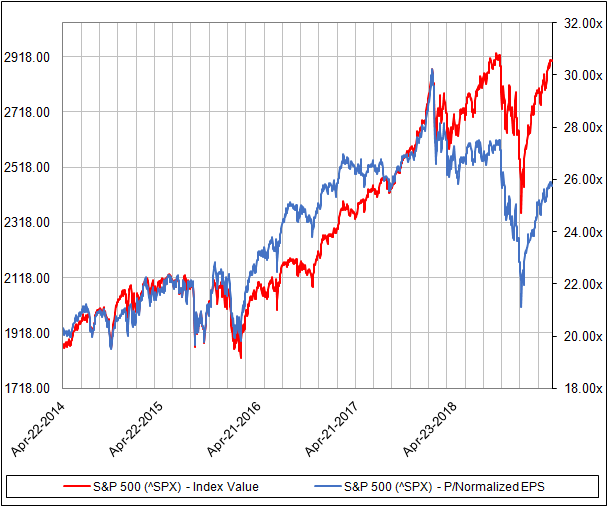 ​The chart above shows the market, as represented by the S&P 500 index, together with the market’s price-to-earnings (P/E) metric over the last five years. The P/E metric used in the chart measures the price of the index divided over last-year’s (trailing) normalized earnings.

#-ad_banner-#Trailing earnings is not my preferred metric — I believe that markets and individual stocks are best assessed when they are reviewed on the basis of their future, not past, profits. Still, “normalized earnings” — that is, earnings intended to present the most accurate picture of a company’s actual financial situation by adjusting the profits for anything that doesn’t reflect the usual operations of each company — can be revealing.

Based on this metric, the S&P 500 index, at less than 26 times earnings, is cheaper today than it was a year ago. Back in April 2018, the S&P 500 traded at a trailing P/E of 26.5. Since then, the market has rallied more than 10% — but at the same time, it has also become cheaper on a trailing basis. All thanks to profit growth, which appreciated faster than the rally. Of course, if companies’ profitability declines or stagnates the market will stop getting less expensive.

What Could Go Wrong — And How We’re Investing
This said, there are unknown factors in every market that can impact its future or the future of any of the market’s components.

Let’s take the health care sector as an example.

Last week, the S&P 500 health care sector declined sharply, having added to its underperformance this year. As of last Friday, it’s the only sector in the large-cap index whose return over the latest three-month period is negative (-4.7% for the sector vs 8.8% for the market). Biotech wasn’t spared either, and many of our biotechnology stocks have followed suit.

This is a volatile sector, though — and its volatility often cuts both ways.

Last week, just as the sector sold off, we learned that a so-called “bubble boy” disease — a genetic immune system disorder that makes young children extremely susceptible to infections — has been cured. This is all thanks to the experimental treatment using gene therapy and low-dose chemotherapy — and to a tiny biotech called Mustang Bio (Nasdaq: MBIO). Today, MBIO trades 113% higher than on April 17.
Yes, this is a volatile sector. But as I’ve been discussing over the last few months (here, here, and here), this is where a lot of the major growth opportunities are going to be over the next few years. (I’ve even gone out on a limb and said that gene therapy — and the whole field of “personalized medicine” will be the biggest opportunity of my career.)

At the same time, over at Fast-Track Millionaire, we own the best of the best of the breed. And any one of these companies — which have been carefully selected because of their industry positioning, research prowess and innovative focus — can potentially generate success similar to MBIO’s.

Of course, I don’t expect every single of our biotechs to become an overnight success story. Moreover, it’s entirely possible that, for more than one of these companies, their research won’t pan out. This is why I call for diversification — for doing the homework, and for not putting all our eggs in one basket.

Action To Take
The same goes for the overall market. Stocks, even for the aggressive-growth part of one’s portfolio, should be selected carefully and from many walks of life. This will help investors benefit from several growth trends while remaining significantly insulated from sector-specific events.

Diversification is also a good strategy for investors seeking to build some defenses in this market. And for those looking to strengthen their defensive stance, taking a gain or a partial gain (to raise cash and reduce equity exposure) could be the answer.

P.S. Every year, 600,000 people die of cancer in America. 1.2 million have a heart attack. 30 million are walking around with diabetes. But with personalized medicine, that’s all about to change…

It’s coming around the corner — and faster than you know. Genetic editing is bringing us to the doorstep of a colossal jump in our lifespans. Over the next decade, survival rates will soar for dozens of diseases.

There are a few companies working in this area that stand to deliver massive returns for investors. But the most promising of all may be a company with first-mover advantage… To learn more, go here now.