One tried-and-true way to make a portfolio safer is to move into cash. This is especially true for the markets you might feel are overpriced, overbought, or otherwise ready for a pause, as well as in any market run wild.

Most of the time, however, a move to more cash should not mean selling everything. As tempting as it can be to declare a market top, in reality it’s next-to-impossible to say for sure which direction the market is headed at any given moment.

Cash-rich companies might be one possible answer here: more often than not, a company that generates a lot of cash is a safer investment than one that loses cash.

With this in mind, I decided to screen for tech companies that generate significant amounts of cash. Typically, this can be found in relatively mature, larger-sized companies. And since we’re restricting this search to the tech sector, we’re likely to still have some innovative companies on our hands that may yet still have a lot of upside.

Let’s Screen For Cash-Rich Tech Companies
To find such companies, I started with size. Only companies with an enterprise value (a measure frequently used to value a company in a takeover — and calculated as the total of market capitalization and the overall debt minus cash and cash equivalents) of $1 billion or more made the initial cut. Further, I screened for sizeable revenue streams; at this stage, only companies with sales of at least $550 million in the last fiscal year remained.

Finally, my main criterion: the cash-flow strength screen. Here, only the companies with strong operating cash flow survived the next cut. To judge the strength of a company’s cash flow, we need to make sure it’s enough to pay for capital expenses with some left over. The difference between operating cash flow and the company’s capital expenses had to be 25% or more of last year’s total revenue.

Altogether, there are 41 such companies — and, perhaps not too surprisingly, the list includes such giants as Microsoft (Nasdaq: MSFT), Visa (NYSE: V) and Cisco Systems (Nasdaq: CSCO). But these mega-caps are also significantly larger what we’re after in my premium newsletter, Game-Changing Stocks. Hence, as my last step, I selected the smallest five companies on the list. Here they are. 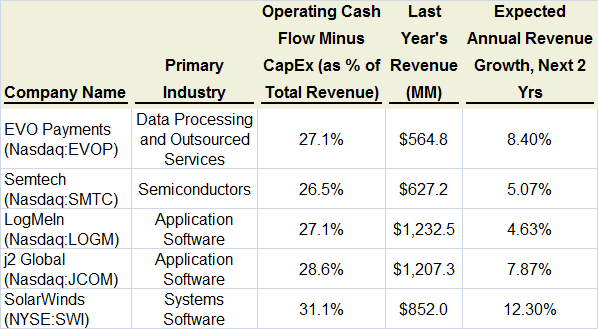 1. With a market cap of just over $2.4 billion, EVO Payments (Nasdaq: EVOP) is the smallest of this group. This company is a payment technology and services provider, servicing more than half a million merchants and processing hundreds of millions of transactions in North America and Europe every year.

A relatively young public company (EVOP went public on May 22, 2018, at $15 per share), EVOP has a bright future. Historically, EVOP has been focused on small e-commerce businesses; more recently, the company has concentrated on more mid-market e-commerce merchants, which will likely improve growth down the road. With a relatively modest expected revenue growth of some 8.4%, analysts covering this company are cautiously optimistic: four analysts rate the stock “Buy” or “Outperform,” six analysts rate it a “Hold” and one has an “Underperform” rating on the shares.

#-ad_banner-#​2. Public since 1967, Semtech Corp (Nasdaq: SMTC) designs, develops, manufactures, and markets analog and mixed-signal semiconductor products for high-end consumer, industrial, enterprise computing, and communications markets. This is a profitable and fast-growing company: this year, it’s expected to make $1.93 per share in profits, and, going forward, it’s likely to grow its revenues at a 5% pace and profits at a 12% annualized pace. Nine analysts rate it a “Buy” and “Outperform,” and three analysts rate the stock a “Hold.”

3. Leading software as a service (SaaS) company LogMeIn (Nasdaq: LOGM) is also profitable. However, its expected growth is relatively low: The company is about to make $4.99 per share in 2019 (although it’s likely to lose money on a GAAP basis — that is, accounting for all, even non-cash, expenses). And because its expected growth is only in single digits, only two analysts currently rate it a “Buy” — versus eight “Holds” and one “Sell.”

4. A provider of a variety of internet-based services, including cloud services and digital media, J2 Global (Nasdaq: JCOM) has been steadily profitable. This year, JCOM is expected to earn $6.80 per share. With expected revenue growth in the high single digits and expected profit growth in low double digits, the company is also the highest-rated by analysts in today’s screen: eight analysts currently rate it a “Buy” or “Outperform,” and only one analyst rates it a “Hold.”

5. With a market cap of $5.9 billion and expected revenue growth of 12.3%, SolarWinds (NYSE: SWI) is the largest stock in this group. It also seems to be the most-attractively valued at its current levels. No wonder that out of 16 analysts following this infrastructure management company, 10 rate it a “Buy” or “Outperform” and six rate it a “Hold.”

Had its IPO not occurred in the middle of a market rout, the company might have been able to start trading from a much higher base. But because it went public last October, shares began trading at $15 (rather than an expected range of $17 to $19). This created a disadvantage in terms of the capital raised, but it has also made a more attractive valuation possible. Let’s keep watching the shares of this cloud infrastructure company.

Action To Take
Keep in mind that the investing ideas I present here are intended to provide a starting point for further research, not a final recommendation. If I think any of these stocks is a “buy,” then my Game-Changing Stocks subscribers will be the first to hear about it.

P.S. Two days ago, I sent my Game-Changing Stocks readers an important email about an event I’ll be attending this Thursday. And I just want to be sure you don’t miss it, either…

On May 9th at 1 p.m. EST, master trader Jim Fink is going to show a small group of regular people how to grab gains of 2,500% or more in a year using his new breakthrough system. There’s still seats available for this special event — but not many, so you’ll need to reserve your spot as soon as possible.

Go here now to RSVP for this free event.