What if I told you that the most precious natural resource in the world doesn’t trade on any exchange? Nor will you find price quotes for it on any financial website.

Sure, oil and gas are vital for energy and transportation. We need timber and steel for construction, and fertilizer is essential for healthy crop production to meet the world’s food needs…

But nothing is more important than water.

Every school child knows that most of the earth is covered in water. But while oceans and seas account for 98%, just 2% is drinkable. And of that 2%, less than 1% is readily accessible (most is locked up in frozen polar ice caps).

Abundant though it may seem, fresh water is far scarcer in many places than you might realize. The fact is, many of the world’s most critical water aquifers, reservoirs and river basins are drying up due to climate change and other factors.

Supply: Dwindling By The Day

In recent years, drought-stricken portions of the Carolinas have been subject to mandatory water restrictions amid sunny skies and searing heat. Florida’s Lake Okeechobee became so dry that 12,000 acres of former lakebed caught fire. California was forced to convene a drought summit and declare a state of emergency in nine counties.

We don’t typically think of water in terms of supply and demand. But consider Lake Mead, which was created in 1937 by the construction of the Hoover Dam. This reservoir gives life to the thirsty Las Vegas desert. But over the past decade, more water has consistently been withdrawn than deposited — creating a structural deficit.

Lake Mead’s “bathtub ring.” The reservoir hasn’t been full since 1983. 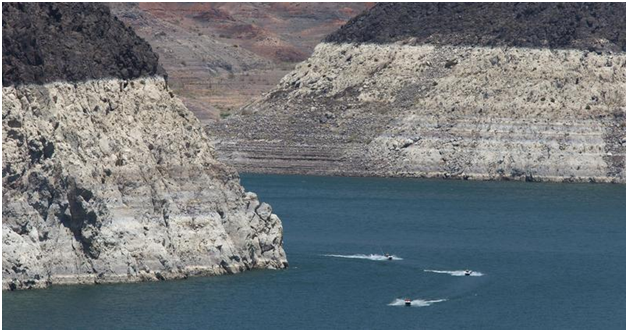 Of course, chronic water shortages are by no means limited to the United States. A few years ago, in Cape Town, South Africa, a key reservoir was depleted to less than 15% of capacity. The situation was so dire that officials nearly suspended municipal water service, but managed to avoid a crisis with strict rationing and conservation efforts. I could go on and on, but you get the idea…

Big storms sometimes bring a reprieve, but they don’t change the long-range weather forecasts pointing to bone-dry conditions in many parts of the world in the coming decade. According to the United Nations, approximately half the global population will live in regions with severe water stress by 2030.

Demand: Growing By The Day

A city like Chicago, with 2.7 million residents, pumps approximately 700 million gallons per day to meet demand. And the global population is expanding by 222,000 people per day — equivalent to a new Chicago every two weeks.

Much of that population boom is taking place in emerging markets, where millions of people still lack basic access to clean drinking water. Even in the United States, we rely on thousands of miles of substandard pipes, some of which are a century old and tainted with lead and other contaminants.

Just ask the citizens of Flint, Michigan or Newark, New Jersey. Incredibly, it has been estimated that the United States loses 6 billion gallons of water a day to leaky, corroded pipes. According to the American Water Works Association, it will take $1 trillion in maintenance and upgrades to bring our dilapidated local water treatment and distribution systems into the 21st century.

You might be surprised to learn where all this water is going, too. Between showers, dishwashers and other household uses, the average person uses roughly 100 gallons a day. But residential needs only account for a small fraction (about 12%) of total consumption. Coal mines, paper mills, petrochemical plants and other industrial operations require billions of gallons each year. It takes 39,000 gallons of water to manufacture a car and 62,000 gallons to make a ton of steel. Oil and gas producers routinely use water to drill and frack a single new well.

But the most intensive water usage is for thermoelectric power and crop irrigation. It’s estimated that more than two-thirds of the world’s freshwater is channeled toward agricultural uses. That’s not surprising, considering that Mother Nature’s rainfall is unpredictable. And irrigation often means the difference between withered stalks and healthy fruit and vegetable harvests.

This Is A Huge Investment Opportunity

The point is, as the world’s population grows, we are going to see a greater strain on existing water supplies. And this leads to one inescapable conclusion: this water deficit is likely to get worse, not better.

My intent here isn’t to scare you with alarming statistics. I just want to call attention to the problem — to underscore the investment potential associated with the companies that can help fix it. Between the critical need for infrastructure spending and powerful demographic trends, it’s easy to see the robust growth potential ahead for companies that specialize in water infrastructure.

Here are some names that are worth looking into…

– Xylem (NYSE: XYL), which makes water pumps and filtration equipment, has roughly doubled in the last five years, and has raised its dividend for the past ten years. (Incidentally, after getting bid up during the latest broad-market rally, it’s now trading back at levels it was in 2020…)

– Roper Technologies (NYSE: ROP), a leader in smart water-metering technology, has gained 125% over the past five years (and has raised its dividend for the past 29 years).

– Idex (NYSE: IEX), which supplies parts and equipment to water treatment plants, has delivered 129% over the past five years.

And if you’re looking for broader exposure, consider water-centric funds like the Invesco Global Water ETF (NYSE: PIO), which has delivered a gain of 85% in the past five years.

While these are all worthy candidates for further research, investors may be left a little wanting in the yield department. So if you are looking for the best high-yield picks the market has to offer, then you need to check this out...

In my latest report, I reveal 5 of my favorite high-yield securities. I consider each one of them to be practically “bulletproof” — because they’ve proven that they can hold up in any market — and continually reward investors year after year.

Go here to learn about these picks now.