The Most Important (But Ignored) Metric For Finding Winning Stocks

The number most often talked about each earnings season is the one that I pay the least attention to, and you’d be wise to do the same…

Fill in the blank: “Shares of XYZ stock are (falling/rising) after the company (missed/beat) earnings expectations.”

No, the number I’m talking about is not “expectations.” The number I’m referring to is the actual earnings figure. It’s always about earnings. And because that’s the number most investors focus on, it’s the one that management does its best to “manage.”

Net income can be manipulated using a variety of tactics, such as reducing depreciation assumptions, increasing income with one-time gains, or shifting expenses to a later period.

Even the label itself, earnings, goes by a plethora of different names… net income, bottom-line, and profit are all used interchangeably.

Now there’s no perfect financial metric to look at when it comes to a company’s financial statements, but there is one that I believe gives the most “honest” assessment. It’s the number that most accurately depicts a business’ economic health.

Why? Because it’s the hardest to fake. As the old Wall Street adage goes, “Cash is fact, earnings is opinion.”

The Most Important Number In Finance

Specifically, when I’m evaluating a company, I look at cash flow from operations. This shows the actual cash that is flowing in and out of a business. It tells me exactly how much money a company has at its disposal to invest back into the business or pass on to shareholders. In short, it’s the lifeblood of any business.

I talk a lot about cash flow in my premium newsletter services. As I’ve told my readers, a proper assessment of cash flow could have saved investors from the likes of Enron and Lehman Brothers.

For example, investors who closely watched the cash flow numbers for investment bank Lehman Brothers could have pinpointed exactly when the firm was in trouble… and avoided its disastrous collapse.

You see, in the five years leading up to its demise, Lehman Brothers reported annual earnings growth. In fact, the firm showed a 20% compounded annual growth rate in net income between 2003 and 2007. However, investors who were watching cash flow would have seen weakness in the company’s finances as early as 2004.

Suddenly, cash from operations went from a positive $2.4 billion in 2003 to a $10.9 billion loss the following year. And it only got worse from there… 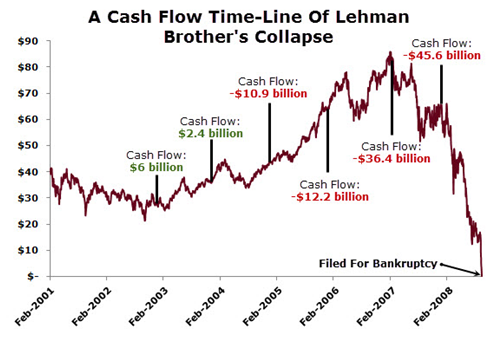 Keep in mind that as the firm was bleeding cash it continued to post increasing earnings. In the end, the company lost more than $45 billion as the housing market fell apart in 2008, and Lehman Brothers was left holding a hodgepodge of worthless mortgage-backed securities.

This is a prime example of how cash flow would have flagged the early warning signs of a company’s impending financial troubles. One thing to keep an eye out for is a company whose cash from operations consistently trails net income. That’s usually a sure sign of financial woes.

Of course, cash flow isn’t the perfect line item to tell you whether a company is a value trap. But it’s a number that I find more telling than a company’s bottom line, which can be easily massaged.

Keep this in mind as you see companies report during earnings season. If you see a headline indicating that shares of one of your favorite companies have slid because earnings missed Wall Street’s expectations, take a deeper look in the financial statements. Perhaps it’s an opportunity to pick up shares of a wonderful company at a better price.

P.S. After months of research, I think I’ve found the “next big thing” in tech…