3 Things About The Market You May Be Ignoring

Up one day, down the next. I don’t know about you, but I’m getting dizzy.

Investors just can’t make up their minds about whether the huge rally of the past 11 years still has room to run, or if it’s the time to head to the sidelines.

A convincing argument can be made for either decision. Here are three thoughts I have about what’s going on in the market right now — and what you can do about it…

1) Massive Buybacks Are Bolstering The Market (For Now…)
On the plus side is the strong economy, strong (albeit slowing) corporate profit growth, and the unabating wave of companies buying back their own shares.

As reported by The Wall Street Journal a few days ago, more than 80% of firms in the S&P 500 have reported results for the first quarter. Of that number, those firms have repurchased $180 billion worth of their own shares during that time. This pace, according to the article, is lining up to become the second-highest amount on record (with data on corporate buybacks going back more than 20 years, to 1998).

When was the record buyback quarter? According to the Journal, the record-high amount of share buybacks happened in the fourth quarter of last year, during the market selloff: during those three months, corporations spent $233 billion on their own shares.

Every quarter in 2018 saw increases in share buybacks, and, altogether, last year S&P 500 companies bought back $806.4 billion worth of their own shares, 36.9% more than during 2007 when the previous record of $589.1 billion was set. While we obviously don’t yet have the numbers for the second quarter, the prevailing trend during the two previous market pullbacks, according to the Journal, was for the companies to accelerate their buybacks.

2) The Trade War Is Beginning To Create Casualties
On the other hand, there is growing uncertainty about the trade-war and the potential effect it will have on corporate profits and the overall economy. The selloff has been especially pronounced in tech companies in the semiconductor and telecommunication equipment markets.

#-ad_banner-#That’s because of the U.S. crackdown on China’s Huawei Technologies and also on companies doing business with Huawei, one of the largest companies worldwide in the telecommunications-equipment business and also the second-largest seller of smartphones. Last year, Huawei spent about $11 billion on U.S. components.

Many U.S. companies are tangled in the trade war (including a few in my own Game-Changing Stocks portfolio). And if you think large companies or mega-caps will be spared, think again. These companies have significant international business and are as vulnerable to the effects of any trade war (if not more so) than smaller-sized companies.

Even Apple (Nasdaq: AAPL), one of the market leaders, gets a thumbs-down from analysts because of the trade war. (One prominent analyst at HSBC specifically cited the worsening trade conflict between the United States and China as the reason he lowered his rating on the stock.)

And yet, on the very next day, Tuesday, May 21, markets moved higher after reports that the United States temporarily eased restrictions on Huawei. Many of the companies that sold off on Monday rallied on Tuesday.

3) Defense Is “In”
For investors, it’s important not to let the day-to-day volatility mask a change in the market trend. And what the market has been signaling during the past few months is that the defensive sectors are getting back in style (while some of the most aggressive growth-focused or economy-centered market sectors are lagging). 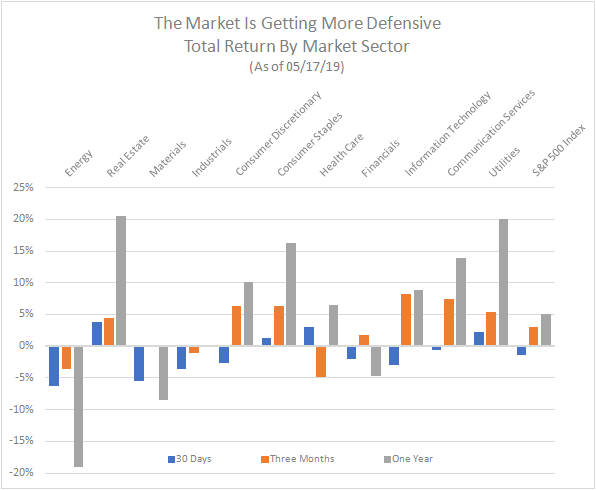 Over the past year, utility and real estate companies — two defensive sectors — have led the market, returning about 20% each year-over-year. And these two defensive sectors have not had a negative return during the more-recent one- or three-month periods. Consumer Staples is the only other sector that can make the same claim. Consumer Staples, the sector that lagged the market for years, returned 16.3% over the past year, 6.3% over the past three months, and 1.4% in the past 30 days (versus the market’s 5.1%, 3% and -1.4%, respectively).

Action To Take
So, how to heed the market’s warning?

First off, have a plan. Make a list of stocks you are ready to buy during a downturn. Take some gains and consider getting out of the way of the freight train that is the ongoing trade war.

This type action is not infallible, of course, as it carries with it a significant opportunity risk — that is, missing out some of the market’s potential upside. To reduce the risk of lost opportunities, staying invested is the way to go. But if you do stay invested, make sure you are comfortable with the stocks you own, both for the short and long terms.

P.S. I just released a shocking new report to my readers, telling them how sources have revealed that key marijuana legislation is likely to pass the House of Representatives “with an overwhelming vote” within weeks. My team and I have found three “below-the-radar” marijuana stocks that could add $112,343 to your account as a result… but only if you own them before the House vote sends them into the stratosphere. Go here to get these three top picks now…