My Thoughts On The Trade War, Trump, And What You Should Do Now…

It seems worse than it really is…

If you read any of the mainstream financial media, you might think that we are on the precipice of another Great Recession. That we are in a correction and headed for a bear market. There’s constant chatter about a slowing global economy and the ongoing trade war with China, and then there’s Brexit — the withdrawal of the United Kingdom from the European Union. Or not.

But let’s step back and look at the bigger picture…

The S&P 500 is only about 5% off its all-time highs set in May. It would need to drop to 2,651 to be considered a correction, which is defined by a pullback of 10% or more. Remember, corrections are part of a normal and healthy bull market. To reach “Bear” territory, it would need to fall all the way back to its December 2019 lows. 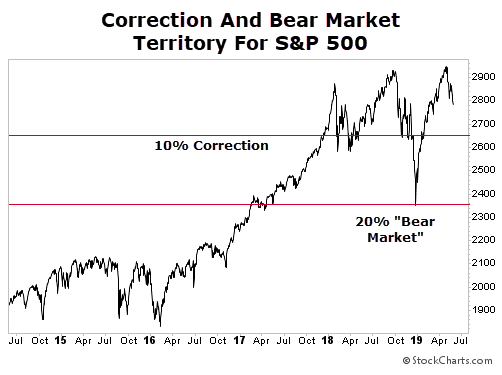 The United States, which accounts for roughly 25% of the world’s economy based on gross domestic product (GDP), continues to show strength. U.S. GDP in the first quarter of 2019 grew 3.1% year-over-year.

The big concern seems to be a slowing Chinese economy. We’ve seen evidence of this slowdown in the form of smartphone sales from Apple (Nasdaq: AAPL) and a slowdown in other consumer goods such as vehicles. In 2018 the country registered its lowest growth rate (as measured by GDP) since 1990. The economy grew “only” 6.6% last year, and it’s anticipated to grow between 6% and 6.2% this year. Yes, China’s economy is cooling, but it still continues to rack up one of the fastest rates of economic growth in the world. To put it into perspective, this year China will add the equivalent of the entire Australian economy to its GDP.

Now, let’s talk the trade war with China, and why I believe President Trump will soften his stance. But first, a little history…

A History Lesson In Trade Wars
The United States has a long history of trade wars going back to when the nation first began. 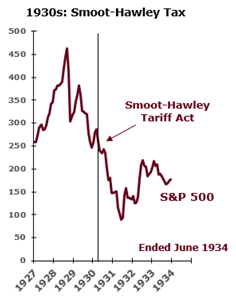 ​In the 1930s, during the early stages of the Great Depression, the Smoot-Hawley Tariff Act was signed into law. It raised tariffs on more than 20,000 imported goods in an attempt to protect American jobs and farmers from foreign competition. The levy prompted aggressive retaliation from the U.S.’s trading partners and ground global trade to a standstill, falling by over 60% from 1929-1932. Many believe the Smoot-Hawley Act exacerbated the Great Depression and stalled an economic recovery during one of the toughest times in U.S. history. 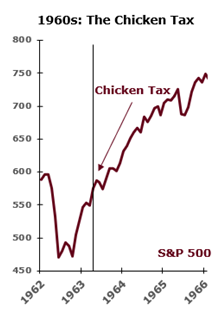 In the 1980s we had a trade war with Japan, which bears similarities to the current spat with China. At that time, Japan’s rise as an economic powerhouse was criticized by many American businessmen and politicians, claiming unfair trading practices. During that time, there was a big campaign to “Buy American,” especially when it came to vehicles, as we saw a flood of inexpensive Japanese automobiles come into the country. 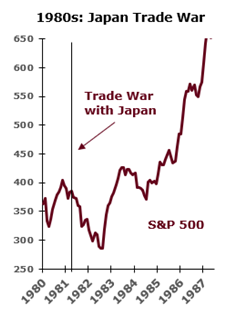 Japan eventually agreed to what was called a Voluntary Export Restraint, which limited the number of Japanese car imports, among other protectionary measures. In April of 1987, the U.S. doubled the import prices on technology goods, including computers, power tools and TVs.

​Japan decided not to retaliate and eventually its rise as a superpower transitioned into what became known as the “Lost Decade,” as its economy fell into a prolonged deflationary recession.

In the 1990s, there was the Banana Trade War, which is when Europe imposed high tariffs on bananas coming from Latin America in order to help their former colonies in the Caribbean have an advantage. However, American-owned Chiquita took the brunt of the banana tariffs as its European exports collapsed. To retaliate, the U.S. placed tariffs on items such as handbags, linens and food goods. This trade war ended in 2012.

Why This Trade War Should Cool Down
The point is that reactions to tariffs and trade wars can impact the market in both a positive and negative manner. Large sweeping tariffs coupled with aggressive rhetoric like we’re seeing with China can have a more lasting and adverse effect. However, I believe President Trump will slowly change his tune regarding the trade war with China…

You see, as we inch closer to 2020, I believe Trump will begin to soften his stance and even look to end the trade skirmishes with China, all in an effort to get re-elected. In order to maintain his perch at the top, he will need to win the states that are being hit the hardest from the trade wars, namely the farming states in the Midwest.

#-ad_banner-#The agriculture industry has been rocked by the ongoing spat with China, specifically the soybean industry. In 2017, China bought $12.3 billion in soybeans from the United States. Last year, that number dropped to just $3.1 billion. The price of soybeans has fallen as demand (mainly from China) has tanked, making it tough for farmers to make any money from their crops. Prices have rallied recently, but at one point earlier this month, they were down 25% from 12 months ago.

Of course, speculating what Trump will do (or say) next is a fool’s game, but it seems logical that if he wants to get re-elected, he will need support from these farming states that have been hammered by the trade war with China. To get their support back, he will need to bring their largest customer (China) back into the mix.

The bottom line is that when looking at the bigger picture of the market environment, I just don’t see the same dire scenario that is being expressed by most in the mainstream financial media. The market as measured by the S&P 500 is only 5% off its recent highs, the U.S. economy, which accounts for a quarter of the global economy, is chugging along at a good clip, and the trade war with China should simmer down if Trump wants to get re-elected.

The good news is that if all of this news about the trade war (and whether or not the bull market is on its last legs) has you feeling helpless about what to buy and sell, then my team and I are here to help…

You see, we’ve spent the last few years designing and perfecting a system that tells you exactly what to buy, what to sell — and when. The result? Gains of 135%, 181%, 242% and more in just a few months — and a whole lot more peaceful sleep. In fact, it’s so reliable we like to think of it as the only legal way to “hack” the stock market. If you’d like to learn more about it, go here right now.