Is It Time To Sell This ‘No-Brainer’ Stock?

Is it time to sell our original “No-Brainer” investment? Has our longest tenured holding over at Top Stock Advisor run its course?

Let’s dive into the semiconductor behemoth that is Intel (Nasdaq: INTC) to see what actions, if any, we should take.

First, recall that this industry giant produced $70.8 billion in revenue for 2018, a 13% increase over the prior year. More than $21 billion of total sales was profit, giving the company a net profit margin of roughly 30%. The company generated more than $14 billion in free cash flow last year and has more than $12 billion in cash on hand.

There’s little doubt that the company is stable financially.

But before we get into the nitty-gritty of the current and future prospects of the company. I think it would be wise to recall why we invested in this stock (way back in September 2011) in the first place…

One Of Our First “Forever Stocks”
When looking for long-term investments, or what we’ve dubbed around the office as “Forever Stocks,” we like to see the company meet certain characteristics. Here are three of the main ones:

– They enjoy huge (and lasting) advantages over the competition.
– They pay their investors by dishing out fat dividends.
– They buy back massive amounts of their own stock.

When we added Intel to the portfolio nearly eight years ago, it not only checked the boxes on each of these characteristics, but it was trading on the cheap — compared with its peers as well as its own historical standards — at just nine times earnings.

The company had also posted five consecutive quarters of record revenues, and earnings per share had doubled over the prior year. Since that original recommendation, shares have outperformed the S&P 500 by 50 percentage points. 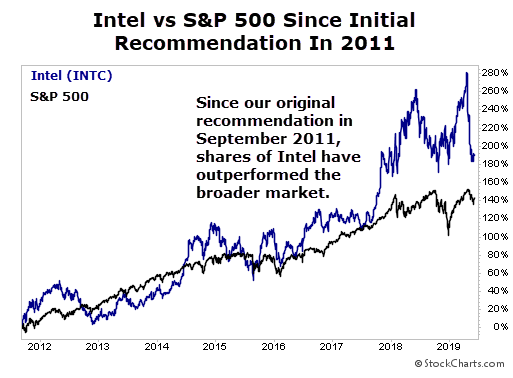 Of course, it’s no longer 2011 and the semiconductor environment has changed drastically since then. For example, tablets like the iPad were just gaining traction, the first “Smart” TVs were beginning to make their way to the market, and the 3D printers had yet to hit the scene.

A Chip For Everything
In today’s technology-driven world, the need for faster chips, more memory and storage, and greater connectivity has never been more prevalent, and Intel is helping drive this evolution. It has its fingers in a range of industries, ranging from automotive to computer and storage to energy to financial services to healthcare to retail to military, aerospace and government. There’s hardly an industry that Intel doesn’t touch.

Intel is everywhere. And it dominates most of its markets.

In 2018, Intel controlled around 15% of the global semiconductor market. It has 40% of the PC market while the next three largest competitors combined have only 17%. And it has a near-monopoly on the world’s chip market for global data centers, with an astonishing 96% market share.

But being the market leader means you have a giant target on your back, and competitors are eager to take market share away… and unfortunately, Intel has been losing ground in a couple of categories.

Is Intel Losing A Step?
One of its largest competitors right now is Advanced Micro Devices (Nasdaq: AMD), which has quickly been gaining ground on Intel’s processor division, which has carried over into the data center business.
During AMD’s first-quarter conference call April 30, CEO Lisa Su pointed out that the company had gained market share in processors for the sixth consecutive quarter. And industry research says AMD has increased its market share in the data center industry to roughly 3%. Granted, that figure pales in comparison to Intel’s 96%, but even a gain as little as one percent in terms of market share translates into a windfall of sales and profits for any company in the multi-billion industry.

Intel has only itself to blame. The company has continued to push back the mass launch of its 10-nanometer Cannon Lake processor, which was originally slated to hit the market in late 2016. Now — three years later — the chipmaker says the processor should be available for devices (PCs, laptops, etc.) by the holiday season of this year. This massive delay was just the opening that AMD needed, and it has taken full advantage.

The Formula For A Turnaround
In the firm’s earnings call on April 25, newly appointed CEO Bob Swan opened up about the difficulties Intel was facing. Swan said Intel would exit businesses that did not fit with its core, like Saffron, a cognitive computing platform Intel acquired in 2015, and focus on executing better at the things that matter most. Swan also lowered revenue guidance for the remainder of the year by 3.6% to $69 billion.

The lowered guidance coupled with AMD snagging market share have weighed on shares of Intel. The stock is down roughly 25% from its April highs, greatly lagging peers and the broader market.

There’s no denying that Intel is facing headwinds. Given what I’ve laid out so far, you can see why many investors sold their shares. But I think it’s premature to panic.

The threat from AMD and other companies like Nvidia (Nasdaq: NVDA) is real, but this isn’t the first time Intel has faced stiff competition. The company still has a firm grip on market share in numerous industries — and the resources to stave off the competition. Intel spent $13.5 billion in R&D in 2018, which easily beats the nearly $1.5 billion that AMD spent and is double what AMD generates in total sales.

Next, the softened expectations from the CEO is a wise move. If played right, he’s setting himself up for success. It rarely hurts to under-promise and over-deliver, which is exactly what I believe Swan is doing. Today’s short-term pain will be quickly forgotten if Swan can deliver better-than-expected results.

And once you stack up to its industry peers — especially AMD — there’s no question that you’re paying far less for a superior business.

Yes, investors are usually willing to pay more for a growth company, but AMD isn’t exactly killing it in terms of sales growth — much less enough to justify a whopping 118 times earnings. Over the last five years, it’s grown sales at a compound average rate of only 4.1%, which trails Intel’s 6.1% CAGR over the same time.

Action to Take
To be sure, I’m not saying AMD is a bad investment. Its shareholders have been handsomely rewarded over the last year, doubling their money. The company has done a great job at producing top processors and stealing market share from Intel.

But I think the recent selloff in Intel has provided a good entry point for those looking to start or add to their position. Shares are trading at a discount on multiple valuation metrics, it produces boatloads of free cash flow, it continues to be a market leader in many of the industries that it competes in, and it rewards shareholders via dividends and share buybacks. It’s grown its dividend 36.7% over the last five years and has purchased $11.4 billion in shares in the last 12 months.

Intel is trading on the cheap, and it’s still a wonderful business. I am willing to see if the new CEO will right the ship and over-deliver on his tempered expectations. I’m telling my Top Stock Advisor readers to continue holding this Forever Stock. As for those of you who don’t already own it, I think it’s a “buy” today.

P.S. It’s the closest thing to a “crystal ball” for the stock market…

We’ve used it to make gains of 135%, 181%, 242% and more — all in a matter of weeks or months. Best of all, you can use this method from your own home — without any specialized training or any expensive equipment. If you have an ordinary online brokerage account, you have all the tools you need to make profits this way. To see how — watch this short video.