This Simple Change Delivered The Biggest Win Of My Life…

I have a dangerous little theory about investing.

I find that it tends to make some people get a little defensive, even angry. That’s because it involves destroying some of the lies we often tell ourselves, potentially disrupting the way we approach investing — or life for that matter.

You ready for it? OK, brace yourself, because here it is…

Once you understand this — I mean, really internalize and accept it — then you will start to be able to see the Matrix, if you will. The path will become more clear than it ever has been before. And, with time, you will learn to use this superpower to great success.

Think of a stock you’ve watched go on an amazing run over the past several years. It’s in every other headline you see online… the talking heads on TV are debating it nonstop — everyone in the investing community seems to be talking about it. You’ve got some strong opinions about the stock and where you think it’s headed. Let’s say, in this case, you think the company has reached its limits. The stock run can’t possibly continue much longer, so you’ve been staying on the sidelines.

Well, here’s the thing about opinions… Everybody’s got one. And most of them suck.

The question you should be asking yourself is: What if I’m wrong?

It’s Time To Change How We Think

It’s harder than it seems. We’re not wired for it. It’s part of our natural psychological defense mechanisms. We see a world we don’t understand, and then we tell ourselves things (based on gut instinct) to make sense of it. Some of those things are right, and some are totally bogus. Determining which is which is of course the hard part, and it can take a lifetime. Yet we don’t like to admit it. We are programmed to be the center of our own universe. And for a lot of us, if we’re somehow not the smartest guy in the room, we have a problem with it. (This tends to be especially hard if you’re even remotely successful or smart to begin with…)

It took me a long time to understand this. And if you’re wondering what this has to do with investing, let me take you back to December 2013.

You see back then, I, like everyone else, had an opinion on Apple (Nasdaq: AAPL).

But my opinion sucked. I thought that since the death of Steve Jobs in 2011, the company was no longer an innovator. I thought most of the stock’s significant gains were behind it. The mojo was gone. And I didn’t think there was anything that could convince me otherwise.

Then I realized: If I wasn’t smart enough to own Apple before, then what made me think I was right to not own it now? Is it possible that I was simply trying to justify my reasons for not buying? (After all, it certainly made me feel better about it…)

This realization hit me like a ton of bricks.

As I told my colleague Jimmy Butts, Chief Investment Strategist of Top Stock Advisor, I had been wasting my time. I was trying to be too “cute,” thinking I needed to find some little-known stock that nobody’s ever heard of to make big-time gains. In the meantime, one of the biggest no-brainer deals in the world was staring at me right in the face. But the good news was, rather than beat myself up about it, I realized that many other investors were making the same mistake.

At the time, the stock was dirt-cheap, trading for less than 10 times cash flow — and an equally enticing price-to-earnings multiple. The company had a then-unheard-of $42 billion in cash on hand, more than enough to continue R&D while ramping up share buybacks and dividends. I told Jimmy this led me to buy shares of Apple, and that I was about to pull the trigger and buy even more.

“How is this even possible?” Jimmy wondered. “Apple isn’t exactly a state secret.”

“That’s true,” I said. “But I think a lot of us would be better off if we just shut up and bought Apple rather than trying to overthink it.”

This turned out to be one of the best decisions of my entire investing career. 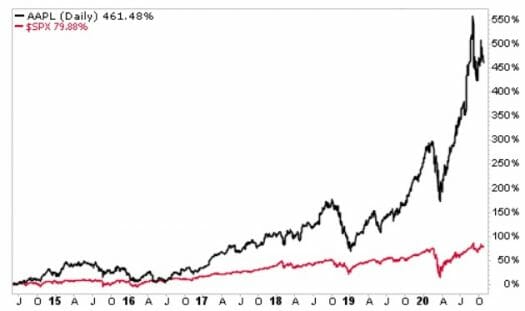 We’re All Guilty Of This…

I’m telling you this not to brag — far from it. After all, I hadn’t stumbled on a ground-breaking stock-tip. I just got over my own assumptions about the stock, realized I had been wrong, and bought. That’s it.

I had been suffering from a malignant condition known as hindsight bias, and it was hurting my portfolio. And if you think you haven’t been guilty of the same thing, then you’re not being honest with yourself. The truth is, investors do this all the time. We see a stock that’s gone up a lot, and don’t buy. Then it goes up more, and we still don’t buy. Then we tell ourselves little lies about why we haven’t bought, and why we’re not going to buy — while the stock shoots off towards the moon.

This causes us to miss out on those huge returns we all like to talk about. But as Ben Carlson of Ritholtz Wealth Management notes in this piece, it was never a “sure thing” when stocks like Google and Amazon went public. As he points out, The New York Times questioned whether Google was really worth $26 billion when it IPO’d. Engineers within Amazon questioned the value of the very product offering they were designing: a crazy little idea for free shipping called Amazon Prime. (Carlson gives a few other good examples, and the blog post is worth reading in its entirety.)

Here’s the bottom line… When we see a crazy long-term chart like Amazon, Google, or Apple, we take for granted that smart people on Wall Street, in the media, and even within the companies themselves, had serious doubts about these companies at various points all along the X-axis. So don’t beat yourself up over those “missed gains.” And whatever you do, don’t let that stop you from buying what might otherwise be an obvious “no-brainer” stock when it’s staring you in the face.

If you’ve found yourself struggling to exactly which stocks to buy, or the right time to buy (and more importantly when to sell) then I’d urge you to check out Jimmy’s Top Stock Advisor service.

Jimmy puts into practice the kind of simple, clear thinking I’m talking about here. And it’s led subscribers to some fantastic gains over the years. I’m talking about gains like 76% from Starbucks, 113% from Alibaba, 152% on Intel, 128% with Facebook, and more…

Are these stocks household names? Sure… But the truth is most investors don’t have the insight to see a deal when it’s right in front of them, and that’s exactly what Jimmy identifies each and every month over at Top Stock Advisor.

What’s more, you’ll still hear about fantastic companies you’ve never heard of before — the next household names we’ll all be talking about one day. And Jimmy’s latest findings could be the biggest winner yet…

To see his latest project, simply follow this link.