One of the first things new High-Yield Investing subscribers notice is that some of our holdings have been in the portfolios for a while… since 2011, 2007, and even 2005. There’s a reason for that.

You see, we do things a little differently. Instead of speculating where security prices might move, I seek out exceptional businesses that are enriching their stockholders.

From my perspective, investing is a marathon, not a sprint. When a company hits its stride and starts raking in cash, it can outrun the market for a long time. So it pays to be patient.

Of course, there is no more famous practitioner of buy-and-hold investing than Warren Buffett. Derided by some as quaint or outmoded, this philosophy has worked out pretty well for Berkshire Hathaway shareholders.

Buffett doesn’t move in and out of stocks very often. And neither do we, at least without good cause. That doesn’t mean you should be a hoarder. If I never sold, there would be at least a couple hundred stocks cluttering up my portfolio by now. That would be unmanageable. There are times when you need to either cut your losses or cash out your gains and move on.

But generally speaking, I don’t jump ship just because the choppy market is making others seasick. I only sell if the company falters or the industry economics change for the worse.

It can take a while for positive catalysts to unfold and competitive advantages to shine through. With rare exceptions, I plan to hold any new recommendation for at least a year. And when a truly special company comes along, I might not intend to sell. Period.

With these “forever” stocks, there’s no need to obsess over every quarterly earnings report or panic whenever the industry winds change directions. They also eliminate the headaches of day-to-day micromanaging and reduce the frictional costs (taxes and brokerage commissions) of excessive trading that can gradually erode returns.

A Textbook Example Of A “Forever” Holding

To understand what I’m talking about, look no further than Coca-Cola (NYSE: KO). Buffett first invested in KO in 1988, spending $1.2 billion to accumulate 100 million shares. He could have cashed out a handsome profit shortly after, but has instead continued to let it ride all these years.

And why leave, considering the company sells around 2 billion servings of its popular beverages every single day worldwide? That’s about 22,000 servings sold per second. No wonder the Coca-Cola brand is estimated to be worth nearly $87 billion, among the world’s most valuable.

Stock splits subsequently grew Buffett’s position size to 200 million shares and then 400 million, while steady dividends and share price appreciation ballooned the value of this $1 billion investment to $5 billion, and then $10 billion. Today, at about $64 per share, this stake is worth nearly $26 billion.

Unlike, say, the biotech or software fields, the chances of a disruptive new competitor suddenly upending the carbonated beverage industry are remote.

You can sift through Coca-Cola’s SEC filings if you like. But you don’t really need to. This is truly a low-maintenance “forever” stock. The iconic Coca-Cola name is instantly recognizable in 200 countries around the globe. The company owns 20 brands (including Dasani, Minute Maid and Powerade) that each generates over $1 billion in annual sales.

Try as they might, competitors haven’t been able to chip away at the firm’s market share or come close to replicating its vast distribution network. It has outperformed the S&P by a wide margin over the past 30 years — and could very well do the same over the next. 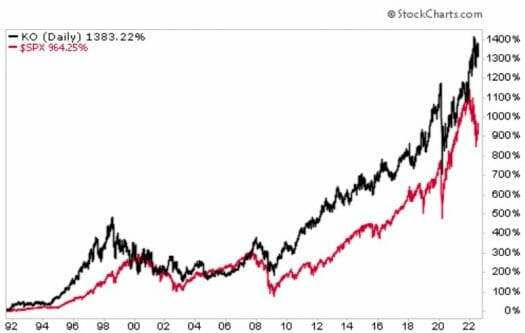 4 Ways To Find A Forever Stock…

There is only one Coca-Cola. But there are other dominant businesses that possess similar traits. They can give you the peace of mind to blissfully endure market corrections and economic down cycles because they simply aren’t going anywhere. As long as cash flows aren’t permanently impaired, any market-driven pullback is just a buying opportunity.

How do you spot these gems? You can start by finding qualified candidates that answer yes to each of the following four questions.

1. Do the firm’s products and/or services stand the test of time?
We live in an age of rapid technological development where breakthroughs can quickly turn the highfliers of today into the forgotten has-beens of tomorrow.

Any advances that make products smaller, faster or stronger can quickly usher in a replacement cycle and throw entire sectors into the history books. Come to think of it, the disappearance of newspapers and the struggles of bookstores in today’s digital world are great examples. By contrast, property insurance, power transmission lines (and yes, carbonated beverages) have no viable substitutes and little threat of becoming obsolete.

2. Is management competent and trustworthy?
Buffett pays close attention to management, and so should you.

If you’re holding a stock for only a month, it doesn’t really matter who is sitting around the executive boardroom table. But managerial decisions and execution can make (or break) a company over time.

The longer the holding period, the more important it is to trust those who are calling the shots. All it takes is one overpriced acquisition to drain resources and destroy shareholder capital. Large companies have billions of accrued profits in the bank and more coming in all the time. Effective deployment of that capital can mean the difference between triple-digit share price gains and a stock that remains adrift.
I am always on the lookout for seasoned managers with an innate ability to balance dividends and buybacks with necessary capital expenditures and growth initiatives.

3. Can the company weather a storm?
The economy inevitably goes through periodic slumps, if not outright recessions. So if you’re going on an extended journey with a stock, the company better be able to withstand a few detours and bumps in the road.

I don’t ask that a stock necessarily deliver positive returns even in the teeth of a bear market (few do). But it is reassuring to know that the company itself can remain solidly profitable — and thus continue paying dividends — even when the climate turns cold.

4. Does the company have a wide economic moat?
I don’t care how great it looks on paper today. Without the protection of a moat, any business is vulnerable to attacks from competitors that can pillage profit. In fact, the more attractive the business, the more likely it is to encourage aggression.

Moats are dug by competitive advantages that keep rivals at bay and allow a company to generate lofty returns on capital that consistently exceed its cost of capital (the end goal of any business). They can take many forms, from patent protection to switching costs.

Keep in mind that moats can gradually erode over time. So to qualify as a “forever” company, the competitive advantages must not only be strong, but also sustainable for at least the next 10 to 20 years.

These four questions will help point you in the general direction of entrenched leaders with timeless products that are poised to deliver superior returns over the long haul. Of course, there are other factors to consider… industry dynamics, balance sheet health, growth opportunities, valuation… the list goes on.

There are several companies in our High-Yield Investing portfolio that I would characterize as “forever” stocks. Of course, these special businesses don’t grow on trees, so out of fairness to my premium subscribers, I’m not going to give their names away today (although I can guarantee you I’ve talked about them in public before).

Now, you could do worse than simply buy shares of KO and leave it at that. But the more important thing to think about is this… do you have a few of these stocks in your portfolio? And even better, do they pay high dividend yields?

If not, then my team and I are here to help…

If you’re looking for long-term wealth builders that pay more than the measly sub-2% yields offered by the average S&P 500 stock, then you need to check out High-Yield Investing. Each month, we’re finding yields of 6%, 8%, and even 11% from securities you won’t hear about anywhere else.