I’m Betting Big On Healthcare And Biotech. Here’s Why…

The market’s comeback this year is one for the record books: The S&P 500 closed the best first half of a year since 1997. Not too many analysts predicted such a big rally — but then again, not too many thought the U.S. Federal Reserve would consider the first interest rate cut in 10 years as early as this July and that the rest of the world would become more dovish as the year progressed.

But investors are still not happy. Just as with so many times during the last few years, they are questioning whether the recent records will hold and whether the rally has some power remaining in it.

Reasons For Caution
One reason for caution: commodities and emerging-market equities have been lagging this year, an indicator that the global growth stays soft.

Second, in 2019 both stocks and bonds rallied. Simultaneous strength in both bonds and stocks isn’t common. That’s because, generally speaking, stocks and bonds benefit from different sets of economic conditions. Normally, when stocks are up, bonds are down and vice versa. (This diverging action is a big reason for the standard financial planning advice calling for a mix of stocks and bonds in one’s portfolio.)

Third, the Russell 2000 index, the leading index of small-cap stocks (and a better benchmark for the aggressive growth stocks I write about), has been lagging the large caps.

Over the past year at Game-Changing Stocks, we’ve done quite well with our strategy of staying invested while taking strategic gains. Having closed 15 positions over the past year, we’ve booked a market-beating average return of 29.5% (with a few triple-digit winners). Of course, no one is perfect, so there have been a couple loses along the way (primarily because we sold too early – for a loss).
Although the gains could have been even stronger, taking profits has paid off handsomely. Better safe than sorry, as they say…

#-ad_banner-#​How We’re Positioned Today
Today, our portfolio is heavily weighted toward biotech and other health-care related industries. I think this makes us well-positioned for this market. Here’s why…

Slowing large-pharma growth and growing political attention to healthcare costs and drug prices are among the reasons for this relative weakness.

But this isn’t the first time we’ve seen such a confluence of events: Drug costs have been a hot-button issue for some time, and the large pharma companies that dominate the S&P 500 healthcare sector has not seen fast growth for at least a decade.

Still, drug and biopharma companies do supply the necessary products for an aging population that’s growing. And this is also where the cutting-edge research and development of new technologies is taking place, such as gene therapies, genetic testing and immuno-oncology.

It takes time, money and effort to progress from an innovative idea to a best-selling drug. But what’s needed most is a strong foundation — and all our portfolio picks have been selected because they have viable scientific ideas that can serve as foundations for their futures. While some might fail (a risk with any biotech), the market will reward the ones that make a tangible breakthrough — it will just take some patience on our part.

That’s because, over the past decade, every time the healthcare sector lagged the general market, it has always come back. To see what I mean, just look at the  Healthcare Select SPDR ETF plotted against the S&P 500 index over the past 10 years, shown below. 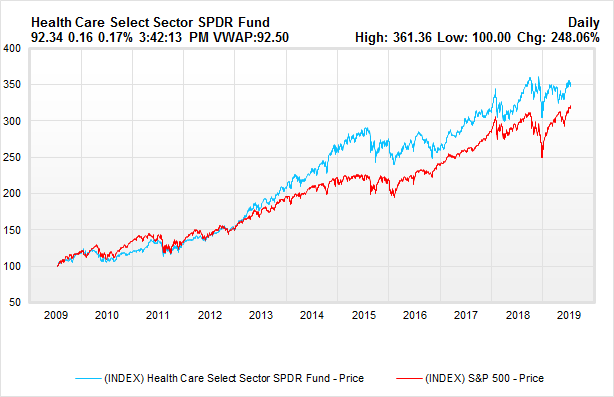 The long-term picture is promising, too. As you can see, over the past decade, health stocks did outperform the market, having returned 248% vs the market’s 217%. And in the latest five-year period XLV returned 52.6%, right in line with the S&P 500.

Action To Take
The healthcare sector is far from dead, and investors who seek strong returns leveraged to technology and innovations should not avoid it.

Rather, they should view this underperformance as a buying opportunity and as an opportunity to collect a diversified portfolio of healthcare and biotech assets that are on the cutting edge of drug development. Such a portfolio, which we have been building in Game-Changing Stocks, is likely to be rewarding.

P.S. My colleague Jim Fink’s Velocity Profit Multiplier system has been on an absolute tear the past few weeks… And the reason for that is simple. He designed it work on stocks that are rising… falling… it really doesn’t matter. More importantly, this powerful system just hit on two new targets… and it could deliver up to 172% in a matter of days.

Learn how to put your name on the distribution list here.