It’s Time To Talk About The Yield Curve…

It’s a small sampling, but backyard barbecues can give you a pretty good idea of the sentiment surrounding the stock market and economy. At these sorts of functions, I’m frequently asked what stock people should buy, or what I think of the latest hot IPO, or cryptocurrencies.

However, the attitudes (and questions) these days have been centered around the economy and more specifically if we are entering a recession, or when the next recession will hit. I, of course, have no idea when the next recession will start. But the sense is that folks are nervously waiting for the balloon to pop and the hot air to quickly evaporate from this decade-long bull market.

Despite the recent volatility, the S&P 500 still near all-time highs, the economy is chugging along at a good clip (3.1% GDP growth in the first quarter) and unemployment is at historic lows. We did see homes sales decline 1.7% in June, marking the 16th straight year-on-year decline in homes sales, which only further exacerbates people’s uneasiness about the economy. We also had one of the most notorious (and reliable) indicators alert us that we could see a recession in the next year…

Why The Yield Curve Matters
Readers of my Maximum Profit premium newsletter may recall that in early May, I touched on the fact that the yield curve for U.S. Treasuries inverted for the first time since 2006. This means that your cash will be treated better invested in shorter-term T-bills than 10-year bonds (usually you are better compensated for longer-duration bonds). 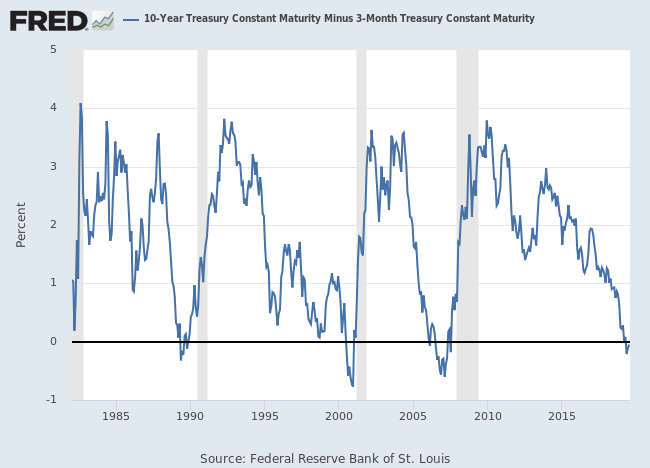 After the yield curve has inverted, the lead time to a recession has varied from five to 16 months, with an average lead time of 11 months. If this time-tested indicator holds true, we could witness significant deterioration in economic conditions in the next 12 months.

Keep in mind that an inversion of the yield curve does not cause a recession. It’s simply an indication that financial conditions have deteriorated, which usually carries serious implications for the economy. However, the economy is not the stock market. Historically, the stock market peaks before a recession begins.

The concern surrounding a looming recession is understandable. After all, the longest U.S. recovery on record lasted 10 years. The current one has eclipsed that high-water mark as it just entered month one of year 11. So many investors feel as if we’re due. Similar to the adage, “Bull markets don’t die of old age,” neither do economic recoveries. There’s no time limit, or countdown clock to the end of the good times.

Just look at Australia’s economy, which hasn’t been in a recession in 28 years. That’s right… it weathered the 2008 financial disaster that plagued nearly every economy in the world. While most countries, especially the United States, were reeling from a severe recession and financial crisis, Australia experienced only a single quarter of contraction.

Of course, our economy and Australia’s economy are vastly different, but this goes to show that economies can chug along for decades without experiencing a recession. Recall that the National Bureau of Economic Research (NBER) defines a recession as a “significant decline in economic activity spread across the economy, lasting more than a few months, normally visible in real GDP, real income, employment, industrial production, and wholesale-retail sales.”

Action To Take
The bottom line is that I do think we are much closer to the end of this bull market than the beginning, but I don’t know when that end will be. We never know for sure what’s going to happen in the future. But I can assure you that I will be diligently watching numerous indicators including the breadth indicator, the Leading Economic Index (LEI), yield curve, and more.

More importantly, I’ll be watching what my Maximum Profit system says. It’s been quite reliable at moving our portfolio to cash during market corrections over the past few years — while also steering us to gains of 20% in 14 days… 82% in 48 days… 118% in 86 days… and 266% in 12 months. And right now, it’s still flashing “Buy.” To learn more about our system and how it can work for you, go here now.