My Gameplan For Big Returns In This Volatile Market

By the time you read this, you must be well aware that something went wrong with the stock market rally.

Over the last week, the trade war escalated, with the slapping of new tariffs on Chinese goods and reports of China asking state-owned companies to suspend imports of U.S. agricultural products. China’s weakening of the yuan (below the closely watched 7 yuan-1 dollar exchange rate) to the lowest level in more than a decade has reignited currency-war fears as well. August 5 was the worst day of the year for the stock market, with the S&P 500 ending the day 5% lower than its July 12 peak, and the tech-heavy Nasdaq 100 dropping almost 3.5% in just a day.

Not to be overlooked, the Russell 2000 index of small-cap stocks — consisting of those companies that are often considered a barometer for the economy — has continued to trail the large-cap indices. And while the S&P 500 trades at about the same level as a year ago, the Russell has dipped further in correction territory, now down 11.1% year-over-year as of the Aug. 5 close.

Adding to the negativity, some economic numbers and expectations have been weaker than expected lately. We recently learned that the Purchasing Managers’ Output Index, a survey of supply chain managers across 19 industries, surprised to the upside with a reading of 52.6 for July, up from 51.5 in June, reflecting moderate growth in the business activity for the month. At the same time, business expectations for both manufacturers and service providers plunged to a record low (the lowest since comparable data was first made available in 2012).

Consumer spending, a backbone of the economy, has weakened, too. From a 1% increase in March, growth in consumer spending slowed to just 0.3% in June, according to the U.S. Bureau of Economic Analysts. Trade-war costs and dislocations are taking their toll.

What It All Means
Investing has become much more difficult, with the so-called defensive sectors (bonds, utilities and real estate) rallying and with the growth leaders — such as tech — selling off. 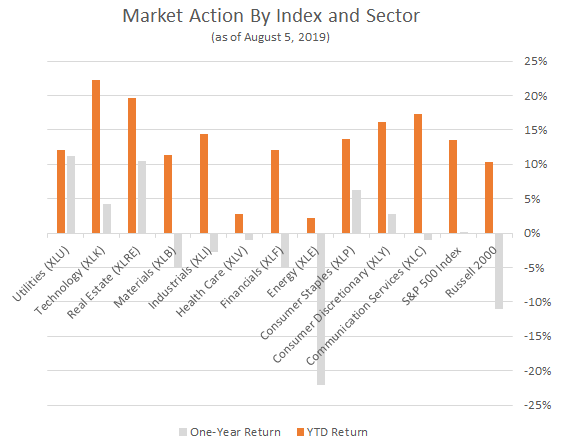 This skittish market has naturally impacted the smaller and younger companies — small caps (like in the Russell), and especially high-growth stocks — disproportionally.

Not only does the less-certain business environment impact their businesses and outlook, but the market has become much less forgiving to mistakes and missteps. Any sign of weakness, whether it’s a question about a company’s business model or a sudden management change, is being more severely punished than before.

And while small-company disappointments are par for the course for an investor seeking outsized returns, the best plan may be to stay the course, albeit with some adjustments, such as culling out the weakest portfolio stocks and reconsidering a bullish stand for some others.

Action To Take
While nobody can predict whether the best of the bull market is over, I think the best course of action is to heed the warning signs and to also start adjusting our portfolio for the possibility of a further pull-back.

Moreover, selling a few positions and re-rating others should also help those of you who are concerned about not having fresh capital to invest in new positions (and to further diversify your portfolio). A method of reducing your position stakes across the board could be the answer if you’re worried about the market and want to increase your cash pile while staying invested. And because everyone’s situation is different, each of you must decide for yourself how much of a gain to take or how much of a reduction to execute.

It’s important to stay invested, though. Not only because timing the market isn’t practical, but also because the recent market weakness does not necessarily mean the market is about to plunge. A 5% market decline following a new high isn’t all that unusual. In fact, according to Bloomberg, since 1929, an S&P 500 slump of more than 5% within two weeks of a multi-year high has happened 16 times. On ten such occasions, the index rebounded to a fresh high. On six occasions the index fell into correction territory. Never has this circumstance led to a bear market happening within the next few months of the high.

Editor’s Note: If you’re looking for an expert with an uncanny ability to pick market-beating investments, then you should check this out…

Our colleague Jim Fink has been serving up some incredible trading opportunities for his Inner Circle members for the past few months, and for a limited time he’s agreed to show 500 smart investors how his “paragon” trading system could help you earn 2,500% in just one year, guaranteed.

Go here now to learn all the details.