Welcome To The Race To The Bottom

Yes, it’s a race to the bottom.

I’m not talking about the market. I’m referring to interest rates. After a couple of wild weeks, stocks — as measured by the S&P 500 – are trading by only about 3% below their recent highs and are up 16.7% for the year. Interest rates, meanwhile, have continued to rush lower.

#-ad_banner-#Just a week after the U.S. Federal Reserve executed its first interest rate cut since the Great Recession, three Asia-Pacific central banks surprised the market with an aggressive rate-cut move of their own. On Wednesday, August 7, Thailand, New Zealand and India all acted to lower their countries’ respective rates. On the very next day, the Philippines joined them.

The developing countries now join the developed world in the rate-cutting process. Central banks in developed countries have already largely lowered rates to record levels, resulting in negative-rate policies in Europe. The ECB first ventured into the negative-rate territory five years ago, and the deposit rate now sits at a negative 0.4%.

Just a year ago, the 10-year U.S. Treasury yield was approaching 3% (2.92% on August 8, 2018) and investors were talking about selling bonds due to the inevitability of rates rising in the near future. (The higher the yield, the lower the price.) Fast-forward one year, and the yield has fallen by more than 1 percentage point, to only 1.72%. In the first few days of August alone, the benchmark 10-year Treasury rate dropped by 18 basis points, from as high as 1.9% on August 1. The rally in Treasuries that started less than a year ago continues.

Even more alarming, the yield curve is now inverted: one-, two-, three- and six-month T-Bills yield more than the 10-years (with yields of 2.09%, 2.07%, 2.02% and 1.96%, respectively). Investors prefer to lend money to the U.S. government for shorter periods. In normal times, the longer the bond, the higher the yield.

The chart below, from the Federal Reserve Bank of St. Louis, illustrates just that. On it, the difference between the yields on a 10-year Treasury and a 3-month Treasury is plotted. As you can see, over the past five years, the difference, while on the downtrend, has mostly stayed in positive territory. Beginning this May, not so much: after briefly dipping into negative territory back in March, the spread decisively moved there in late May. 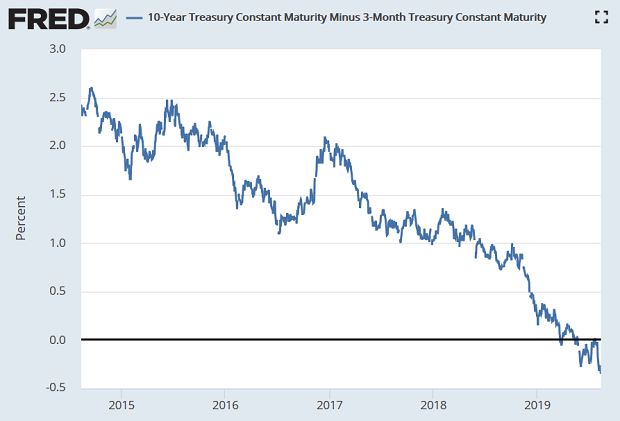 The July interest-rate cut by the U.S. Fed didn’t do much to move this spread into positive territory, either. Now, the market expects another rate cut when the Fed meets in September. According to The Wall Street Journal’s survey of private-sector economists earlier this month, they now see a 63.9% probability for a September rate cut, up from 49.8% in the July survey.

Moreover, a half-point rate cut is now a real possibility, according to the survey.

Whatever the actual size of the September cut, an interest-rate reduction is now likely to happen. The Fed is getting less hawkish and more dovish by the day, given economic headwinds brought on by the trade war and the worldwide slowdown, and considering inflation remains low.

Will another rate cut help the market? Quite possibly. Will it help the economy? Also, very likely.

The July quarter-point rate reduction has failed to move the market for one simple reason: It had been already baked into stocks even before the Fed’s July 30-31 meeting. The September cut, while largely expected, isn’t yet priced in.

Moreover, interest rate cuts, while helping the economy by making money cheaper and credit easier, act with a lag: it takes time for a lower rate to reverberate through the economy and impact enough players to make a difference in future economic growth. This delayed effect does not mean a cut is not working — only that we need to give it some time before the stimulatory result from a lower rate can be seen.

Action To Take
How to benefit? First, it’s important to stay invested.

Growth stocks — especially those that can outgrow their peers — will continue to remain market darlings. And the share prices of companies that have a unique product (or are about to have one), like a cutting-edge biotech stock for example, are largely impacted by their own stories rather than the market’s. If carefully selected, this group should reward investors regardless of the economy.

Second, it doesn’t hurt to have a hedge in place. We’ve been holding the SPDR Gold Trust (NYSE: GLD), which is having a very good year. Low rates and central bank purchases both positively impact the price of gold. This year alone, GLD is up 16.9% — in line with the market. However, in the last two weeks, the two have separated: while the market is down 3%, GLD is up by about 4.5%. This is a good sign — and I expect more from the yellow metal if the market volatility continues to rise and interest rates continue to decline.

And last of all, you may want to check out the latest from our top trading expert, Jim Fink…

Jim has pulled the wraps off his breakthrough Paragon system. And he proved beyond a shadow of a doubt how you can use it to turn the small stock market gains most investors accept into massive triple-digit profits. His program is so powerful — and consistently profitable — we’re guaranteeing anyone who uses it will have the opportunity to see gains of 2,500% in the next year. Get the details here now.