2 Stocks With Strong Momentum And Lots Of Cash…

This common expression is often used when analyzing business or investment decisions. When buying real estate in a hot market, cash is king. If you come to the table with cash over more traditional financing methods, your offer will likely move to the top of the pecking order.

The same principle can be applied to stock-picking. A company that produces a ton of cash or carries a good amount of cash in relation to debt is often seen as a “safer” investment compared with a company that’s debt-ridden. And when investors believe the market is getting too hot or expensive, they will often stockpile cash to have on hand when the next pullback hits. This way, they can pick up shares of their favorite company at a better price.

Of course, having plenty of cash is only beneficial if it isn’t dwarfed by massive amounts of debt. Taking on too much debt can be a real killer as profit is siphoned off to cover debt and interest payments. And if a company can’t keep up with those debt payments, it will have to file for bankruptcy… and even then sometimes the debts are too much to even come out of bankruptcy with a clean slate.

Just look at Toys R Us.

The company was saddled with heavy debt from when private equity firms took it private in 2005. By 2017, when it was approaching bankruptcy, it still had about $5 billion in liabilities and had to completely liquidate. Now, the former toy-industry leader will become just a distant memory, joining the likes of Blockbuster and Circuit City.

As an investor, it’s prudent to pay attention to a firm’s balance sheet. Especially in today’s environment. We’ve gone through (and are still going through) a period with record-low interest rates. The Fed’s monetary policy has urged corporations to borrow nearly-free money… and they’ve done just that. As you can see in the chart below, corporate debt now stands at more than $6.4 trillion, roughly 34% of the total gross domestic product (GDP). 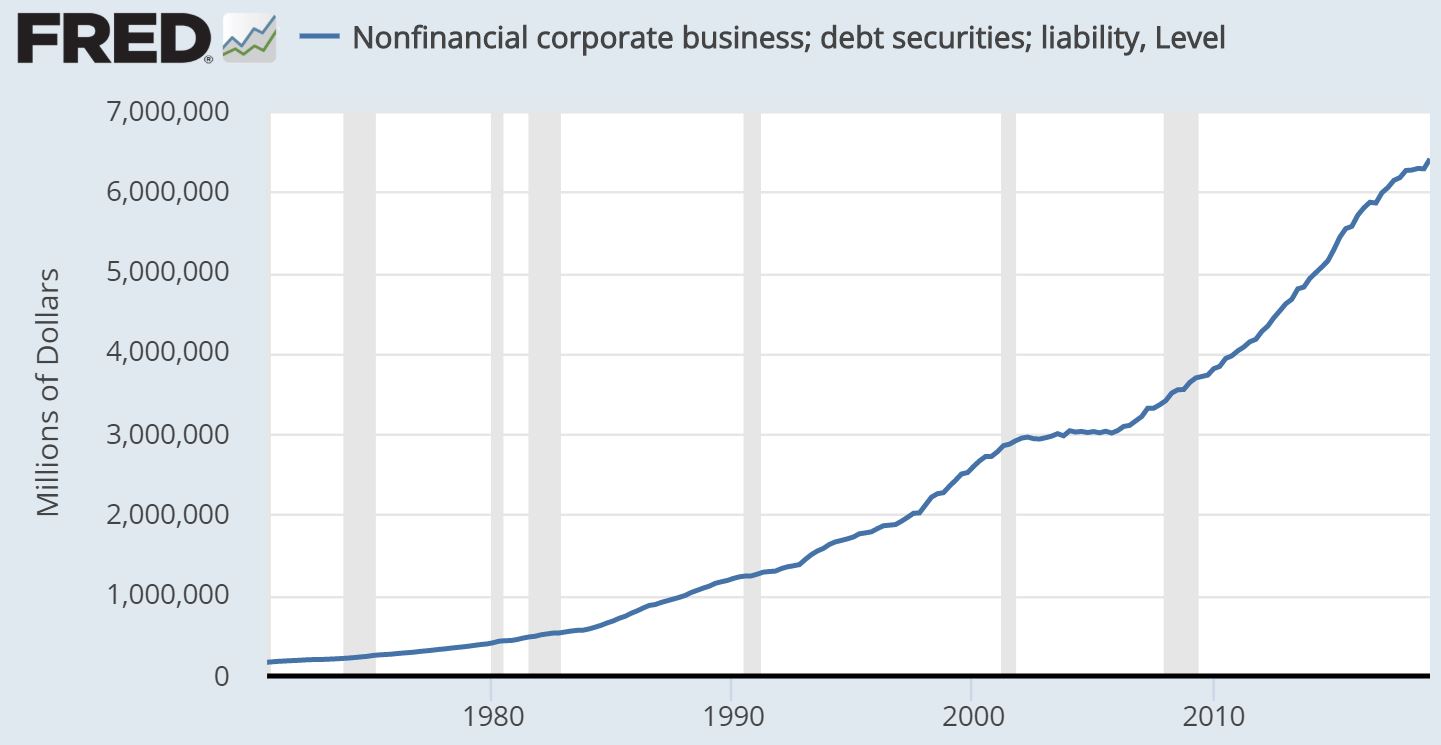 This is important to keep tabs on because, in a declining market, balance-sheet risk becomes one of the most important drivers of equity returns. Stocks that are highly leveraged (not enough cash to debt) will get hit the hardest.

Let’s Go Hunting For Cash-Rich Firms
It was with this in mind that I went in search of cash-rich firms… companies that have plenty of cash to cover their liabilities. Keep in mind that every industry is different in terms of what is a good debt-to-capital ratio, so I screened for companies that had long-term debt to total capital that was below their respective industry averages.

I was left with only 16 stocks…

I then took those stocks and ran them through my Maximum Profit system to see which ones had the most momentum and thus were likely to continue winning in the near term.

Only two stocks made it all the way through.

1. Era Group (NYSE: ERA), founded in 1999 and headquartered in Houston, Texas, provides helicopter transportation services to and from offshore oil and gas productions platforms and drilling rigs. Its services include everything from emergency air medical, search and rescue flights to firefighting to VIP transport to flightseeing services.

In 2018, the company generated $221.7 million in sales and $13.6 million in profit. It’s always nice to see small companies ($226 million market cap) turn a profit. In the same year, the company also reported $44.8 million in free cash flow (this is money left over after all bills and capital expenditures have been accounted for).

The company’s financial services operations consist of mortgage loans, insurance coverage and title agency services. M.D.C. Holdings was founded by Larry A. Mizel in 1972 and is headquartered in Denver, Colorado.

Keep in mind that a screen like this is best used for generating ideas for further research. If they end up in the Maximum Profit portfolio, it will be because of further research — and of course, my premium subscribers will hear about it first.

In the meantime, you may want to check out the latest my colleague, Jim Fink…

Jim has pulled the wraps off his breakthrough Paragon system, and he’s proved beyond a shadow of a doubt how you can use it to turn the small stock market gains into massive triple-digit profits. His program is so powerful — and consistently profitable — we’re guaranteeing anyone who uses it will have the opportunity to see gains of 2,500% in the next year. Get the details here now.