If you’re worried about the future, and what it holds for retirees, you’re not alone…

A survey by Allianz found that 61% of all respondents feared outliving their retirement savings more than they feared death.

It’s understandable why people are so anxious. Retirement accounts got hit hard by market events like the dot-com bust, the housing meltdown and the subsequent financial crisis. Some people stopped investing entirely because they were afraid to put their life savings at risk.

But at the same time, savings accounts and certificates of deposit aren’t even beating inflation. If you want to have a healthy, comfortable retirement, then that’s clearly not going to cut it.

That’s why our research staff has spent the last several years developing… refining… and perfecting a new kind of retirement plan.

We designed it specifically for those in or approaching retirement with three main goals in mind:

To maximize income, maximize growth, and minimize risk… all while collecting an average of one or more dividend “paychecks” per day.

That’s exactly why we call it the Daily Paycheck Retirement Strategy.

The system we designed is NOT complicated. At its core, the strategy is all about finding strong dividend payers and letting them pay you year after year.

Over roughly 10 years, our subscribers have collected thousands of dividend paychecks using this strategy. And currently, our portfolio is averaging a payout of $1,349.73 each month.

But our success with dividend investing is no fluke. When you look at the data, it’s obvious that dividend payers are perhaps the single best place to put your money. According to Standard & Poor’s, since 1926 nearly half of the market’s total return has come from dividends. That’s right — if you ignore dividends, you risk giving up nearly half of the market’s returns.

You’d also be ignoring some of the market’s best performers. Ned Davis Research found that from 1972 through March 2014, dividend paying stocks in the S&P 500 returned 9.3% annually, far exceeding the 2.4% annual return for S&P stocks that didn’t pay a dividend. 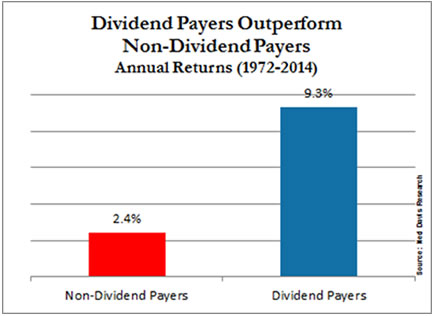 Put simply, investing in dividend payers is a proven long-term strategy. But with the Daily Paycheck strategy, we’ve taken that idea one step further.

The critical discovery we’ve made is that, by using the right combination of dividend stocks, it’s possible to create a retirement portfolio that achieves our three original goals all while paying you multiple dividends every month.

As mentioned earlier, our subscribers have used the strategy to collect tens of thousands in income — and those numbers climb by the day.

And between the capital appreciation and reinvested dividends, our model portfolio — which started at $200,000 — is now worth nearly $400,000 at last count. That’s doubling our money from some of the most conservative investments on the planet.

One of the best parts about this strategy is that it works for investors of all walks of life — whether you have $1,000 to invest or $1,000,000, or more. The thousands of folks we’ve already shown this to are enjoying similar results.

In fact, our team has done a ton of research on the impact of using this Daily Paycheck strategy. Here are a few success stories we’ve heard from investors:

— Annie S. from Nevada said that she covers most of her monthly expenses with the “$2,194 a month” that she earns from this method.

— And Curtis S. from Washington wrote that he collects “about $4,200 per month.” After padding his investment account, he said he spends the rest on home improvements, precious metals, and helping out his children.

These people aren’t members of the richest 1%. They’re regular folks. But they’ve figured out that anyone can use the Daily Paycheck strategy to earn a growing income stream to help pay their monthly bills, fund retirement, or simply increase their wealth.

We love hearing their stories. After all, providing a better retirement option was the primary reason we created the Daily Paycheck strategy in the first place. So with these stories as inspiration, we’re getting  the message out to more people. That’s why we created a special report that reveals exactly how this strategy works. You can check it out here.