Unfortunately, most folks have the wrong expectations when it comes to investing. They believe they can — and will — strike it rich overnight. They fully expect to double or triple their money in a short amount of time.

Some people look at investing in the stock market the same as buying that multimillion dollar Powerball ticket. They lay all their hopes and dreams on the line with the slim chance of making millions, whether it’s with a penny stock, cryptocurrency or some other investment.

We’ve seen it time and time again. Going all the way back to tulip-mania in the 1600s to the South Sea bubble in the 18th century to the Dot-com bubble in the early 2000s to or the real estate bubble in 2008.

All the focus is on the potential reward. The risk side of the equation is thrown to the wayside.

But if you want to become a truly successful investor, you need to pay attention to the amount of risk that you’re taking in exchange for that reward.

For most investors the attitude is all or nothing. They’re all in when the market is doing great… ignoring the risks. But as soon as the market tumbles, loss aversion kicks in and they fold… telling themselves this “investing” thing isn’t for them.

Investing and managing risk go hand in hand. It’s better to consider — and plan for — potential losses before they happen rather than after the fact, such as during a downturn when you’re suddenly panic-stricken.

There are a variety of tactics you can deploy to help mitigate risk. Diversification, position sizing, and stop-losses are strategies that can help reduce risk.

Of course, it also helps to know what you’re investing in. You’re not going to avoid bad investments entirely, but by sticking to some key tenets you’ll greatly improve your chances. Your results would be greatly improved, for instance, if you focus on investing in high-quality businesses with wide economic moats, or firms that churn out excessive amounts of free cash flow.

Today, I want to put the focus on another attribute that I look for in the search for the next big winner. It’s one that I’ve talked about before in the pages of my premium newsletter, Capital Wealth Letter: investing in companies with irreplaceable assets.

One Of America’s Great Irreplaceable Assets

Irreplaceable assets are products, services or businesses that give companies a huge competitive edge over the competition. We’re talking about things like railroads, ports, pipelines, hydroelectric dams, and other vital pieces of infrastructure. In other words, assets that are extremely difficult to replicate.

Take, for example, the Grand Coulee Dam on the Columbia River in Washington State. Completed in 1942, and expanded in 1974, it is the largest hydropower producer in the United States. It generates more than 6,800 megawatts of electricity annually. That’s enough power to supply 2.3 million households with electricity for one year. 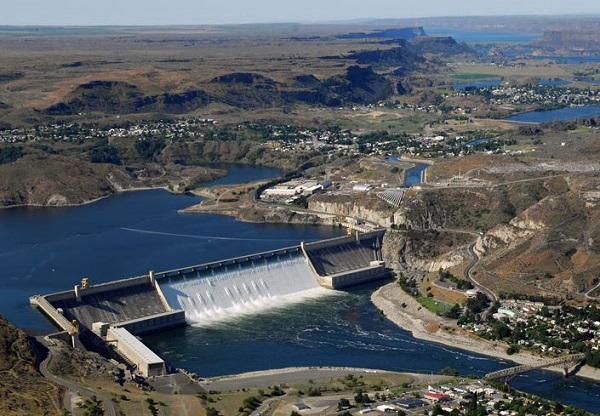 ​
Source: U.S. Department of the Interior Bureau of Reclamation

The facility is more than four times the length and produces more than three times the power of the Hoover Dam outside Las Vegas. The dam cost $163 million when it was completed in 1942, while the third power plant added in 1974 cost an additional $730 million.

Today, Grand Coulee produces some 21 billion kilowatt-hours (kWh) of emissions-free electricity per year, charging wholesale power rates of between 3 and 6.95 cents per kWh. Using the low end of that rate schedule, power sales from Grand Coulee are worth more than $600 million annually.

That doesn’t even include the Franklin Delano Roosevelt reservoir created upstream of the dam that irrigates more than 670,000 acres of farmland. When you consider those revenues, Grand Coulee likely generates a more than 50% return on its combined 1942 and 1974 construction costs every single year.

And here’s the beauty of something like the Grand Coulee… It’s not going anywhere. You can’t just build another dam upstream or on a nearby river to compete with it. And sure, it cost a pretty penny at the time to build it, but it was a one-time fixed cost. Everything after that (like maintenance) is minimal.

Unfortunately, we can’t directly invest in the Grand Coulee Dam as it’s owned by the U.S. government. But it gives you an idea of the amount of wealth that can be generated from assets that are difficult, if not impossible, to replicate.

The good news is that there are publicly-traded companies that own irreplaceable assets. And as you can imagine, investing in these companies has proven extraordinarily profitable over the years — and the downside is limited.

Yet most investors tend to ignore these sorts of assets. They’re not as sexy as what you’ll see dominating the airwaves on CNBC.

For the past few years now, Elon Musk has been working on a secretive project over at SpaceX. It’s the ultimate “irreplaceable asset” — and it’s about to go “live” soon.

Because this venture is private (for now), there’s not a way to invest directly. But I’ve found a “backdoor” way that barely anyone knows about. Get the details right now here.