Why Momentum Investing Works — And Why It’s Worth Trying Yourself…

Let’s talk about momentum investing, and why it works…

Within a group of stocks, some will perform better than others. That’s where relative strength (RS) strategies come into play.

There are several variations of relative strength investing, but they each recognize those differences. As the name implies, relative strength ranks relative performance. In short, it’s a way to rank investments from the strongest (best performers) to the weakest (poor performers).

Momentum investing (or relative strength, specifically) flies in the face of what the average individual is taught about investing. (Think “buy low, sell high” – we’re buying high and selling higher.) But this is where it helps to think of relative strength like choosing the winner of a marathon race. Marathon runners cover 26.2 miles. If given the chance to bet on the eventual winner with only a mile to go in the race, most people would bet on one of the front-runners. After all, there is little chance that someone three miles from the finish line at that point could be the winner.

In other words, the front-runners have put in a strong performance and are likely to continue outperforming. Stocks show a similar pattern of behavior — the strongest performers have a tendency to continue performing well. High relative strength investments are likely to show continued strength. Low relative strength investments, the ones that have failed to keep up with the market in the past, often continue underperforming.

Most traders use relative strength to identify — and buy — strong stocks and sell weak stocks. (Remember, relative strength is different from the Relative Strength Index (RSI), which I have covered in previous articles.)

For example, a couple years ago, my screens showed that Enphase Energy (Nasdaq: ENPH) was boasting strong relative strength. We quickly added it to the portfolio, and shares didn’t disappoint… 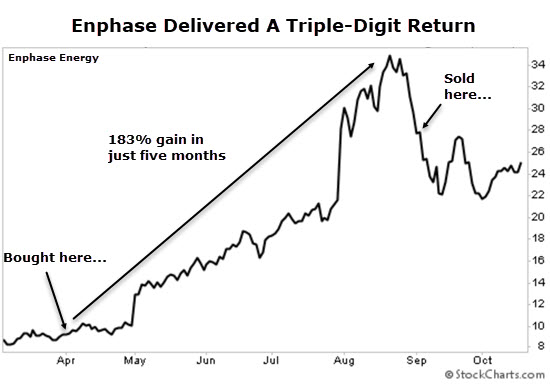 Not only that, but when our system showed that ENPH’s proverbial sails were losing wind (meaning that momentum was fading), we sold just in time. We ended up booking a whopping 183% gain in only five months. That performance outdid the S&P 500’s meager 4% return during that time.

Of course, this is just one example of many. And not every trade goes as smoothly as this one. But that’s the beauty at the heart of momentum investing… When a trade doesn’t go our way, we cut our losses (preferably keeping the losses small). By doing so we avoid even larger losses. Then, it’s on to the next strong performer.

While it is painful to see a trade go against you, trust me, you’re better off taking a small loss. Investors that try to “ride it out” usually end up regretting it. Sure, clinging to hope could lead to the stock climbing back to your entry price. But you have to consider the opportunity cost that’s been lost waiting for that day. Until then, that is dead money that can’t be put to work in a stock that could be rewarding you with gains.

You don’t have to use the exact relative strength strategy we use over at Maximum Profit. But understand that momentum investing works, when executed properly. Follow the script of buying the outperformers and selling the underachievers. Do this, and you’ll be far and away ahead of the average investor.