Which Put Contract Should You Sell For The Best Income Potential?

As some of you know, selling put options in your investment account is a great way to create a healthy income.

The process is fairly simple. We start by selling a put option contract for a stock that we would like to own. This contract obligates us to buy 100 shares if the stock closes below a certain price, called the strike price, on the date when the put contract expires.

If the stock remains above the strike price, we get to keep the income we received from selling the put contract. This means our obligation disappears (or expires). If the stock trades lower, we still get to keep the income we received for selling the put, but we also get to buy the stock. This is fine if we don’t close out the trade before expiration. We have already established that we would like to own it at a discounted price.

From our perspective, this can be a win-win situation. You either create income in your account with no obligation or are obligated to buy a stock you already want to own. But even with this simple strategy, there are still some details that must be nailed down. After all, we want to ensure we are generating the maximum income with the least amount of risk.

One of the biggest questions for traders who use this strategy is: Which put contract is best to sell? More specifically, traders need to select the contract with the right strike price for their particular situation.

In the Money or Out of the Money?

When evaluating put contracts to sell for income, we can break the available choices into two primary categories:

Take a look at the table below. It contains a portion of the option chain for Apple (Nasdaq: AAPL). For context, AAPL was trading for $164 when we created this graphic, and in-the-money options are highlighted in blue. 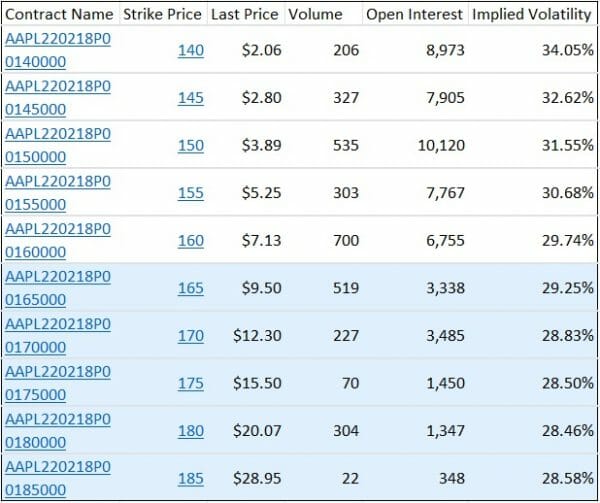 In-the-money puts typically trade with higher premiums because they already represent significant value for buyers who would purchase the put contracts. This is because the stock price is below the strike price, so the owner of a put contract has the right to sell us the stock above the current market price.

Suppose we sell in-the-money puts, which carry a high nominal price, and the stock trades higher than the strike price before the expiration. In that case, we will be able to keep the entire premium we received for selling the puts, and we will not be obligated to buy any shares of stock. In this instance, the further in the money our contract is, the more cash we get to collect.

But if the stock does not trade above the strike price before the puts expire, we will be obligated to buy the stock at the higher strike price. But remember that this was a stock we already wanted to own. And given that we sell in-the-money puts in strong bull market environments, as a general rule, we can expect the trend to continue, giving us a healthy investment with a high probability of achieving more gains.

So to answer the question of which put contract to sell… It depends largely on the overall market environment and our expectations for the underlying stock.

As a general rule, however, we like to sell out-of-the-money puts. These puts have a lower nominal price because the obligation is less likely to be exercised (so they carry less value for the buyer). Selling these creates less income in our account due to the lower premium we collect — but they also have less risk.

Remember, the stock needs to trade lower if we are obligated to buy shares. So selling out-of-the-money automatically builds a margin of safety for our position. Depending on how far out of the money the put contracts are, the stock could drop a relatively substantial amount without our obligation to buy kicking in.

Given the uncertainty in today’s market, you may be more interested in selling puts that are out of the money. Many of the stocks you might like to own right now might be fairly extended and vulnerable to pulling back. And from a macro perspective, several risks could still send equity indices lower.

On the other hand, during strong bull market periods where investors can generally expect stocks to continue trading higher. So if you think this bull market can continue, then selling in-the-money puts can be a bit more lucrative. Again, generally speaking, this is not our preferred course of action. But in the end, it’s up to you.

P.S. If you’re looking for a way to generate steady income, then you need to turn to our income expert, Robert Rapier.

Up, down, sideways… even in the face of rising interest rates… tech selloffs… overseas war… and anything else Mr. Market throws at you, Robert’s trades are income-generating machines.

Robert Rapier can show you how to squeeze up to 18x more income out of dividend stocks, with just a few minutes of “work” each week.