How To Profit From Booming Global Trade

I was sipping a frozen cocktail on the deck of the Norwegian Breakaway a few months ago.

We were leisurely headed southward to Puerto Rico when, suddenly, I spotted a giant containership off our starboard bow. She was traveling in the opposite direction.

It’s not an uncommon sighting – containerships are the semi-trucks of the sea.

Still, I couldn’t help but stare and wonder what goods were stowed inside all those metal boxes. Then, of course, I began to see dollar signs.

An Inside Look At Global Trade

There are approximately 40 million shipping containers in use worldwide, and most make several transits annually. Built to be nearly indestructible, these stackable twenty-by-eight-foot steel containers can safely hold up to 25 tons of cargo.

Pry one open, and you might find tennis shoes inside… or kitchen appliances, sporting goods or lawnmowers. They even have refrigerated units for things like bananas, flowers, frozen foods, and other perishable cargo.

It’s estimated that about 90% of all global trade is seaborne. Once upon a time, ocean-going goods such as wine and tobacco were moved in large casks or barrels. Other products were shipped in sacks, boxes, or crates. But metal containers started gaining favor after World War II. They proved so effective at speeding up the loading process, eliminating breakage and theft, and lowering labor costs, that they are now ubiquitous.

The dimensions and building specifications have become standardized over the years. You’ll often see the term ‘TEU’ in this industry, which stands for twenty-foot equivalent units. But 40-foot containers (2 TEU) have become more common. You can easily load either onto a semi-trailer truck or railroad for intermodal travel. 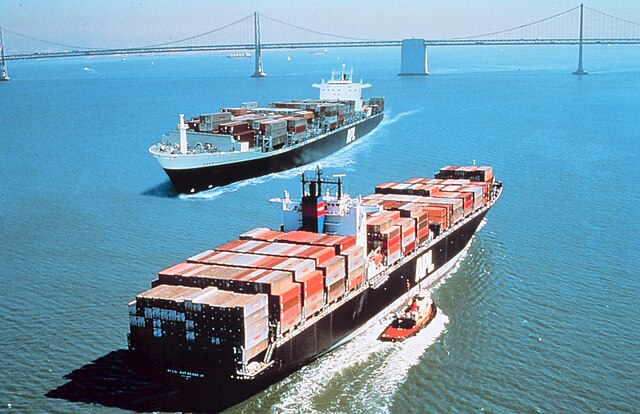 To capture economies of scale, containerships have roughly doubled in size over the past decade. The largest now stretch 1,300 feet from bow to stern, equivalent to four football fields. They contain more steel than the Eiffel Tower and have enough deck space to haul 20,000 containers.

It might take a dozen smaller ships to transport the same amount of cargo. So the bigger class of vessels has dramatically expedited transit times and increased overall efficiency. Recent expansions to the Panama Canal accommodate some of these larger vessels, opening shipping routes from Asia to the U.S. East Coast.

These bustling deepwater seaports are getting busier all the time. Container traffic figures vary widely by source – but everyone agrees that volume is rising.

According to the Port of Hamburg, global container throughput has tripled from 200 million TEUs in 2000 to 600 million today. For context, those containers would stretch around the earth 94 times. And they carry raw materials and finished goods worth an estimated $4 trillion per year.

From furniture to mobile phones, we can thank containers for the wide availability of foreign-made goods and burgeoning global trade. They also help keep prices affordable. An average 40-foot container can carry 10,000 pairs of blue jeans from Asia to Europe for about $1,700 – or 17 cents per pair.

The Big Picture – And How You Can Profit

Over the years, container shipping has generally outpaced global GDP. Industry slumps are rare and usually tend to be shallow. The volume of goods being moved by container has been rising inexorably since the 1980s. In fact, aside from a mild single-digit dip in the recession of 2009, there hasn’t been a single yearly decline over the past two decades. 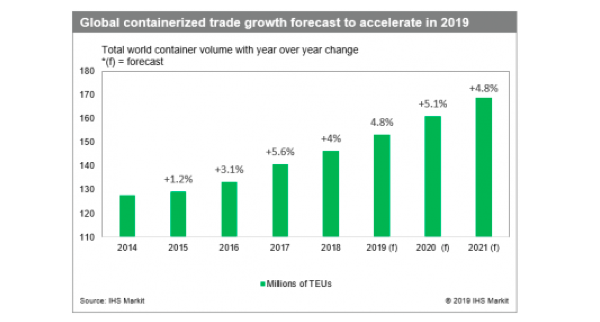 As you can see, container volume is forecast to continue climbing at a healthy 5% pace over the next couple of years. Beyond that, we simply need to connect the dots…

1. The world’s population is growing by 200,000 people per day.
2. More people means greater consumption of raw materials and finished goods. More bananas, more televisions, more blue jeans, more coffee tables… the list is endless.
3. There are no railroads from Hong Kong to Sao Paulo or Johannesburg to Los Angeles. Unless we discover a miraculous technology to beam all this stuff from one place to another a-la Star Trek, it will be moved by ship.

Of course, none of this is new to High-Yield Investing readers. We own preferred stock in Global Ship Lease (NYSE: GSL-PB), which owns a fleet of 40 mid-sized (2,000 – 10,000 TEU) containerships. Those vessels are rented out to liner companies under long-term contracts that will bring in $835 million in future charter revenues.

Clearly this is a good business to be in, which is why we’re getting paid a yield of 9.6% for our trouble.

Seaspan (NYSE: SSW) is another pick I like in this space. It owns a fleet of 112 vessels – and fleet utilization is at an 8-year high. The stock yields an enticing 4.6% based on recent prices.

But my recent recommendation in this space has a similar business model and shares many of the same tailwinds. But instead of leasing ships, it rents out the containers. They could have bananas bound for Liverpool or electrical machinery leaving Singapore. Regardless of what’s inside, we collect a steady rental income.

Unfortunately, I can’t share the name of this recent pick out of fairness to my premium subscribers. But if you’d like to get the name and ticker symbol of this pick, all you have to do is learn more about High-Yield Investing right here.