Insiders Are Spending Millions On This Energy Stock

Company executives and board members might sell some of their shares for any number of reasons. But there’s really only one reason they buy more: an expectation that the stock will deliver gains.

That’s why insider buying can be more telling than insider selling.

Nobody knows High-Yield Investing portfolio holding Kinder Morgan (NYSE: KMI) better than the firm’s Chairman and co-founder Richard Kinder. It speaks volumes that Kinder has been gobbling up huge blocks of KMI shares all year. And he has stepped it up the past couple of months, buying 300,000 shares on October 29, another 300,000 on October 31, another 300,000 on November 11, and then 300,000 more on November 26.

He’s not the only bull in the Kinder Morgan executive lounge. On November 20, director Sarofim Fayez put up $4 million of this own money to buy 200,000 shares near $20 per share.

This enthusiastic insider buying is a reassuring vote of confidence. Management continues to “eat its own cooking” and now owns about 15% of the outstanding shares. And I share their optimism wholeheartedly.

The Case For KMI

#-ad_banner-#Counting crude oil and refined products, Kinder Morgan operates 84,000 miles of fee-earning pipelines (not to mention 157 storage terminals that are 95% leased). That infrastructure generated $1.14 billion in distributable cash flow (DCF) last quarter, or $0.50 per share. That’s enough to cover the $0.25 quarterly dividend two times over. In fact, there was $571 million in excess DCF after the dividend was paid. That surplus allows Kinder Morgan to fund its ambitious growth projects without having to borrow or issue new shares.

The most recent expansion is the Gulf Coast Express Pipeline, which entered service ahead of schedule in late September. It’s expected to help drive DCF to $5 billion this year. And there is $4 billion still in the project pipeline to make sure that figure is even higher in 2020 and beyond. 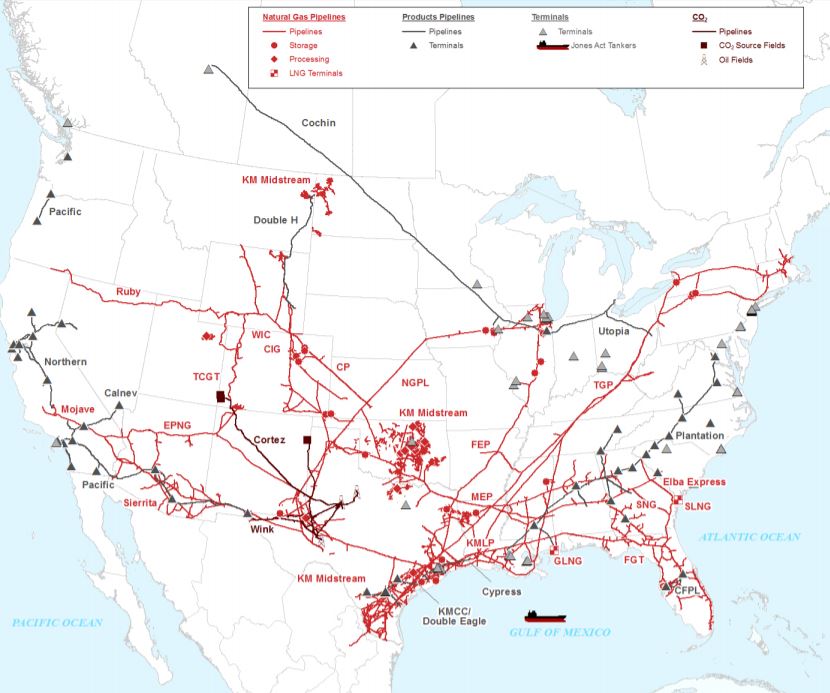 With a dividend coverage ratio of 200%, Kinder Morgan will have no trouble following through with a promise to raise distributions by another 25% next year. The stock yields roughly 5% as it stands now, based on recent prices.

Not only is the company producing record cash flows, but recent asset sales have bolstered the already stout investment-grade balance sheet, reducing debt to just 4.4 times EBITDA. Better still, Kinder Morgan is one of the few pipeline owners that doesn’t issue a complicated K1 tax statement.

The stock has given my High-Yield Investing readers and me a 28% return over the past year, and I think more is on the horizon. If you’re looking for an energy pipeline stock to own, this may be your top choice.

P.S. While KMI has been a nice winner for us so far this year, that’s just the beginning… We’re sitting on a number of triple-digit winners in our portfolio over at High-Yield Investing — and we’re earning as much as 11.2% a year in dividends. If you’re looking for more high-yield stocks to add to your portfolio, then go here to learn more.