How To Invest In The Business That Will Never Die

The first Federal inheritance tax was passed in 1898. Corporate taxes were written into law in 1909. And in 1913, the Sixteenth Amendment was ratified, paving the way for federal income taxes as we know them today.

Ironically, that first attempt at taxing income from wages, property, and investments was the byproduct of a fierce debate on tariffs. Politicians of the day wanted to reduce tariffs and abandon the nation’s protectionist policies. Income taxes were seen as a way to offset lost federal revenues.

Over a century later, we are still arguing over these same issues. But whatever transpires on Capitol Hill, one thing is for sure: income taxes are here to stay.

Unless you’re basking in retirement, you’ll probably receive a paycheck this month. Without even looking, you know that the gross amount of wages paid at the top won’t match the net paid on the bottom. Employers must automatically withhold a portion from every paycheck to cover state and federal taxes.

While the dollar amount may sting, the withholding process itself is rather painless. But that’s certainly not the case when it comes to reconciling everything on April 15.

Every year, 155 million American taxpayers are forced to file their annual 1040 forms. The actual task of completing and filing year-end tax returns gives millions of Americans a pounding headache. And it’s not getting any easier. In the beginning, the U.S. Tax code was roughly 400 pages. It’s so convoluted today that nobody seems sure of the exact length. But several sources put it at nearly 75,000 pages. That’s about 185 times the original length.

By comparison, Tolstoy’s “War and Peace” is a breezy short story. 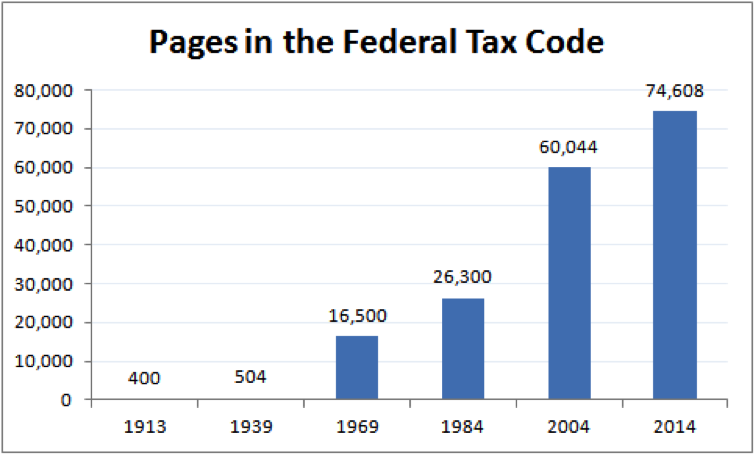 The complexity stems in part from the government’s use of tax credits and incentives. This is essentially a social engineering project to encourage some behaviors (like installing solar panels) and discourage others. There are also reams of instructions dealing with the treatment of things like daycare tuition, vehicle mileage, and other topics that wouldn’t seemingly belong on a tax return.

And just when you figure everything out, the IRS implements new changes.

Enough To Make Your Head Spin

There have been nearly 5,000 federal income tax revisions just since 2001. Last year brought sweeping changes, rewriting the rules on everything from child tax credits to mortgage deductions.

The federal tax code and its accompanying policy statements are an estimated 10 million words in length. For comparison, the King James Bible has about 783,000 words. If you want to be fully compliant with all the complex rules and provisions, you better start reading now. I say that half in jest. But for the thousands of taxpayers who get audited each year, this is no laughing matter.

You’ll be shocked to learn how much time we spend to stay in the good graces of the IRS, too.

Consultants at IBM surveyed 15,000 taxpayers and CPAs. They found that workers who use tax preparation software spend about 40 hours a year on record-keeping and other tasks. Those who use CPAs or other professionals still spend 26 hours a year. The IRS estimates that Americans spend a combined 8.9 billion hours a year preparing their tax returns. That’s equivalent to 4.3 million people (about the population of Kentucky) working full time 40 hours a week from January 1 to December 31 on nothing but paperwork and calculations.

Not everyone has the know-how to wade through a 1040 return. Many others simply lack the time, particularly self-employed and upper-income workers with more complicated taxes. Some are forced to attach an entire alphabet of schedules (A, B, C, D, SE) and other forms. These cover everything from hybrid vehicle credits to dividend income to oil and gas royalties.

All that time comes at a price. Tax Foundation.org estimates the total cost to U.S. taxpayers to file their taxes each year in terms of preparation fees and lost productivity. Their estimate for last year: $400 billion. The more burdensome the IRS requirements, the more cash raked in. Not by the taxpayer, mind you, but by companies that exist solely to assist individuals and businesses with their taxes.

Look, this is pretty simple… The vast majority of filers seek professional assistance or at least run the numbers through computer software. That’s big business for a handful of national providers – about $20 billion in annual revenue. In fact, there are only three — a very attractive ratio.

And since there are only three big boys, I just can’t share the name of the one I recently picked for my High-Yield Investing portfolio. You’ll have to do your own digging on this one.

But mark my words: This is one of only two industries that I can unequivocally say will never disappear. (The other, of course, is burial services.)

It’s also recession-proof. The IRS doesn’t lower taxes or relax filing requirements based on changes in interest rates, consumer spending patterns, or GDP growth. Good economy, bad economy. It doesn’t matter. Everyone still has to file. And my recent High-Yield Investing pick controls a larger share of this lucrative market than ever. The firm’s hefty dividend yield might be a throwback. But with new tools and apps, the company is reinventing itself in the digital age.

If you’d like to learn how to join us and get the name of this pick, simply go here.