What a difference a year makes.

The week leading up to Christmas 2018 was the worst for U.S. stocks since the 2008 crash. The market was already in turmoil when Treasury Secretary Steve Mnuchin sent out a bizarre tweet on Christmas Eve to say that he had spoken with the CEOs of the nation's six largest banks and was reassured that there were "no liquidity problems or margin issues."

The statement was meant to pacify jittery investors but instead had the exact opposite effect. In what is normally a quiet day for the market, traders fled and sent the Dow tumbling 650 points. It was the worst Christmas Eve selloff on record.

There was a nice bounce two days later, but the damage had been done. The Dow Jones finished the month with a painful 9% decline, the worst December performance since 1931 when the country was in the grip of the Great Depression.

I didn't buy into the doom and gloom. Unlike in 1931, the underlying macro backdrop at the time was quite positive. The following week, I said that "this crisis feels more manufactured than real" and predicted we'd see "a recovery on the horizon once confidence returns."

As I write this, the Dow has logged gains in eight of the past nine days and just set a new record high. 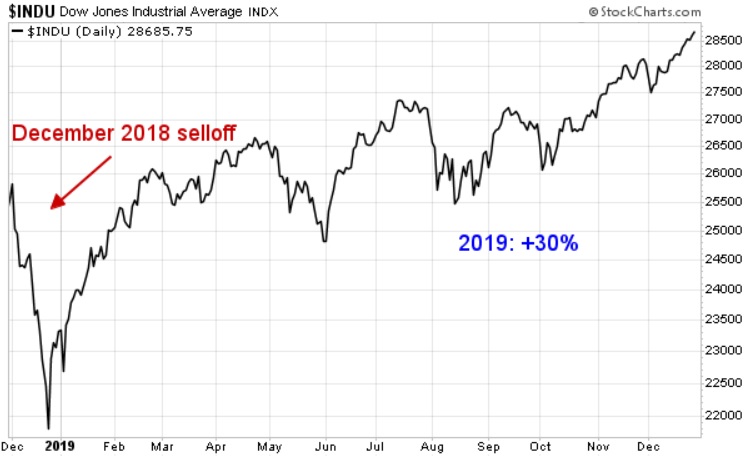 This "Santa Claus" rally stands in stark contrast to what we saw 12 months ago. It has also put an exclamation point on a fantastic year in which the major averages have surged nearly 30%.

Clearly, the market is elated that trade relations between the U.S. and China have begun to thaw. And all that talk last summer about a possible recession? We aren't hearing it anymore… not with record low unemployment, healthy consumer spending, and resurgent corporate earnings growth in the forecast.

I've shared my thoughts on a few areas I'm targeting as we head into a new year. For those who missed, I've written about the bullish numbers in the housing market, the reasons bank stocks could do well in 2020, and one business that will always be in demand.

The point is, it's never smart to be complacent. I hope you didn't miss out on the rally in 2019. But even if you did, the ideas mentioned above should be more than enough to get you started off on the right foot in 2020.

But before we get down to business in 2020, let's take a few days to enjoy what has been a very productive 2019 for portfolios.

Another sector I'm learning more about from my colleagues is marijuana stocks. That's because it just might be one of the greatest investment opportunities we’ll ever see in our lifetime.

As marijuana (and its cousin hemp) are increasingly legalized around the country (the state of Illinois being the latest, among others), growth-minded investors simply can't afford to ignore what's going on here.

A few high-quality marijuana stocks will soar in 2020, but others will disappoint. To learn about our top plays for the new year, click here now.