Find Stocks With This One Trait, And You’re All But Guaranteed To Win

Brand loyalty is a beautiful thing.

I know people who claim they would rather push a Ford than drive a Chevy (and vice-versa). I know Coke fans that would go thirsty before drinking Pepsi. And many golfers wouldn't think of teeing off without a set of Callaway golf clubs.

We all have our favorites. But that loyalty only extends so far.

Millions of consumers are big fans of Netflix's (Nasdaq: NFLX) movie streaming service. But if provoked, they can and will take their business elsewhere. A few years ago, the company drew the ire of customers with an ill-conceived rate hike that triggered 800,000 subscriber cancellations in less than 90 days.

The golden arches of McDonald's (NYSE: MCD) are recognized and revered worldwide. Yet, people don't have the same appetite for a Big Mac and fries these days. In response, the company has revamped its menu over the years, with lighter offerings and even redesigned stores.

I don't mean to imply that these popular brands are fading away. Far from it. But neither are they untouchable. And if they aren't safe, then nobody is. Fortunately, there are other ways to keep customers from straying. While brand loyalty can waver, there are two things that are arguably more important to consumers and business owners alike — time and money. If switching to a competitor involves either (or particularly both), then they are often disinclined to make a change.

That reluctance is like a glue that prevents customers from slipping away — and the stronger the glue, the stickier the revenue.

This Keeps Customers Coming Back

I don't know about you, but I prefer investing in companies with stable recurring revenues rather than one-and-done transactions. After all, the more visible the revenue stream, the more dependable the cash flow. And the more reliable the cash flow, the safer the dividend.

Some investors believe the key to safety is investing in recession-proof products that are always in demand. That's not a bad idea, per se, but the assumption itself is flawed.

We all need gasoline. But I've seen plenty of gas stations fail, because there is nothing preventing a driver from bypassing one store to pull in across the street. Likewise, milk, bread and eggs will always be bought regardless of economic conditions. But that doesn't mean that every corner grocery store will thrive. How much trouble is it to pick up a gallon of milk at a convenience store instead?

These businesses may sell products with stable consumption, but it's easy for their customers to shop elsewhere with minimal hassle. Instead of looking at the products, focus on the customers — and ask yourself whether there is any glue keeping them there.

There is nothing adhesive about fast food outlets, gas stations or grocery stores. On the other hand, switching from one insurance company to another can be a major pain.

I've been with State Farm since I got my driver's license at the age of 16. I get a multi-policy discount for combining auto, homeowner and other policies, so replacing one line would mean a complete insurance overhaul — not exactly a fun way to spend a Saturday afternoon.

I've also got automatic bill pay bank transfers set up, so those would have to be redone as well. And there's no way to know how responsive a new agent would be to claims and other issues. Even if I could save a few bucks by switching, it probably wouldn't be worth the paperwork headaches.

So they've got me hook, line and sinker.

The High Cost (And Big Returns) Of High Switching Costs

The same thing is usually true with banks, brokerages, and financial planning firms. Could customers leave? Sure. But doing so takes effort. And unless there is serious provocation, we just don't take the initiative.

But this concept goes much deeper than the annoyance of filling out account transfer forms and the awkwardness of explaining to a broker why you are moving your money. In many cases, there are actual monetary considerations.

One of the most common is a termination fee or penalty for abandoning a mobile phone contract early. But $200 or so is peanuts compared with the millions that large businesses could lose by switching to different service or equipment providers.

Take Fiserv (Nasdaq: FISV), which provides the backbone systems that process millions of ATM withdrawals, checking deposits and other transactions for banks and credit unions. You can imagine the disruption of transferring this critical behind-the-scenes task to rival software that might not be as reliable.

Aside from the risk of fumbling the handoff, there's also the cost and downtime of retraining employees to use a new system. Because of the "switching cost", Fiserv rarely loses customers. In fact, the company has historically boasted a near-perfect retention rate of 99%.

That's a big reason why its shares have delivered an eye-popping gain in excess of 850% over the past decade. 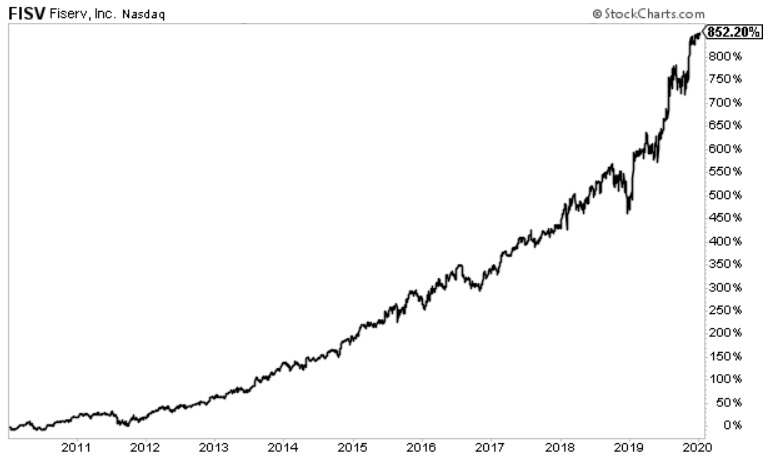 This is just one example, but there are plenty more like it.

The point is, it's all too easy to take a company's customers for granted, until they stop coming in the door. And sadly, that happens all too often (just ask Radio Shack). But high switching costs diminish this risk and keep customer attrition low. The higher the perceived cost (real or imagined), the less likely a customer is to stray, even if they might get a slightly better deal elsewhere. This is a powerful competitive advantage — and not just because the cash registers are always ringing.

I'm always on the lookout for companies whose customers are held in place by high switching costs – and you should be, too. In fact, isolating this singular trait has helped me identify numerous winners over the years.
You'll see this trait at work in several of my portfolio holdings over at High-Yield Investing.

That’s one of the major reasons why we’re collecting yields as high as 11.2% — without taking on too much risk. And we’re also sitting on long-term gains as high as 470%. If you want to spend less time worrying about bills and more time doing the things you want, then you can't afford miss it. Check out my latest report for more…