This Simple Rule Keeps One Bad Trade From Destroying Your Account

One thing most people may not realize about me is that I don’t speed when I’m driving. Ever. I just don’t see the point in it.

Of course, sometimes I may realize how fast I’m going. Or perhaps I fail to notice a speed limit sign. But for the most part, I just don’t speed.

The risks outweigh the reward.

Most folks speed if they’re running late, thinking they will make up lost time. Sure, they may make up a minute or two depending on the distance they’re traveling. And they may get away with it many times before they’re caught… But is that extra minute you might make up worth getting a speeding ticket? If you get pulled over, not only will you be extra late as the cop mulls over your license and registration. And if he gives you a speeding ticket, now you are out time and money. Plus, when you do get pulled over, it often happens at the worst possible time…

It’s that simple. To me, the risks of speeding outweigh the reward. So, I do my best to stay within the speed limit.

This is just how I tend to think about things. Whenever I’m entrenched in something, I tend to analyze every single possible outcome before making a move. My wife thinks I’m weird for this, but I don’t mind… It helps me understand the world – and more often than not, it leads to a rational decision-making process that works out pretty well.

This kind of thinking comes in handy especially when it comes to stocks.

In fact, I’ve spent the past decade thinking about the risks associated with stocks. Specifically, I now analyze most decisions (to buy or sell) comparing the downside to the relative upside.

In other words, risk versus reward.

As I’ll explain in a moment, there’s often more to the calculation than you might think…

The Risks Associated With Winning

Everybody assesses risk differently, whether we’re talking about speeding or the stock market.

Unfortunately, when it comes to the stock market, many investors assess their risk as if they must do 80 mph in a 55-mph zone in order to be successful.

But that couldn’t be further from the truth.

Fortunately for us, we have rules and sell signals in place to curb our risk and keep our losses small. And I’ve talked about why it’s so vital to cut losses short a number of times. So today I want to talk about another risk that can easily creep up on us, especially during periods of resounding returns like we’ve witnessed lately.

To understand this, think back to 2019. The S&P 500 returned roughly 30% that year. When you have a year like that, nearly everything you touch has a good chance of making money. And that was certainly true for us over at Top Stock Advisor, my premium advisory service. 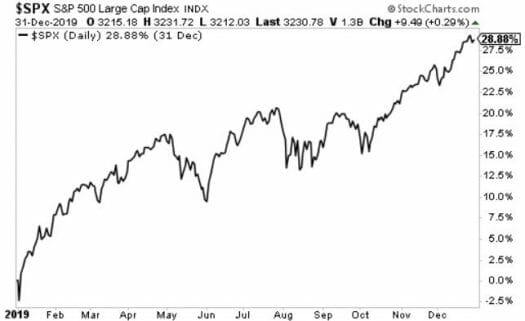 When the market behaves like this, we tend to become overconfident. All of a sudden, every investor and trader thinks they are a genius. And that confidence can lead them to make some very crucial mistakes — and I’m not just talking about making “riskier” picks, either…

Here’s what I mean… Perhaps you’ve heard of the “2%” rule. It basically refers to the amount of your portfolio you should allocate to each trade.

I won’t get into the “whys” or “hows”, other than to say that this can serve to protect your portfolio. It allows you to live to fight another day in the event you find yourself with a total dud of a loser. It’s a pretty good rule of thumb for traders to follow.

But when we are enjoying a lot of success, this urges us to inch up our allocation with every trade. That 2% inches up to 3%, then 4% or 5%. Pretty soon we are putting all our eggs in one basket, believing that our winning streak will continue.

Now, that can work well when times are good. But think about that chart of the S&P in 2019. Remember what happened just a few short months later?

We all know what happened next. As the market went into a nosedive, some stocks held up better than others. But like the driver who gets stopped for speeding, some investors saw their portfolios decimated. Meanwhile, other investors simply saw the speed trap, tapped the brakes a bit just to be on the safe side, and moved on.

Take it from me. I’ve been a victim of this line of thinking. And I assure you, the market will quickly humble you.

This happened to me when I was trading currencies. I nailed a handful of trades and grew my account nearly 20% in less than a month. I was risking very little with each trade and stuck to my game plan. But because of the success I had, I decided to put more money at stake.

I did okay with my next couple of trades, then upped my allocation a little more. Because of my increased exposure, my next trade wiped out all my profits and then some. Had I stuck to my normal allocation, I would have still been up double digits after that one loss.

So take it from me. The market is doing well right now, and that’s great. But don’t let the winning go to your head. You will inevitably make a losing trade once in a while. Keep your allocations in check. With each trade, just assume going into it that you may lose money. If you can’t stomach that, then you need to lower your allocation.

Remember, it’s not how much money you make, it’s how much you keep. Don’t let one trade blow up your account.

P.S. The world’s richest billionaires — Musk, Bezos, and Branson… are in a FIERCE competition, battling it out in what media is calling the “billionaire space race”…

Each one of these guys have plans to dominate the $2.5 trillion space industry — but ONE may have already won the race, thanks to a new technology that’s hovering above the earth as we speak. And the good news is that you and I can profit from it, thanks to a little-known “backdoor” way…

Go here to get the details right now.