This Energy Stock Is Already Rebounding Despite Global Headlines

With the news about Iran over the past week, it’s a good time to check in on our old friend Occidental Petroleum (NYSE: OXY).

For those who may be unaware, this stock has been a bit of a thorn in our side. It’s been one of the few laggards in an otherwise stellar year over at High-Yield Investing. Despite the naysayers, however, I kept holding on to the stock. That’s because with each new development in 2019, the future kept looking brighter and brighter…

In May, I touched on Occidential’s bidding war with Chevron (NYSE: CVX) for Anadarko Petroleum — and how Warren Buffett himself was helping tip the scales in favor of the smaller Occidental.

Then in June, I covered the details of Occidental’s winning bid. The price tag: $57 billion (including the assumption of debt).

I also stated the case for why the deal makes sense, despite the monster-sized price. Here’s the main thrust of my argument:

For its part, Occidental believes the deal will be accretive to earnings and could help “accelerate” dividend growth. But that depends largely on how efficiently it can milk Anadarko’s acreage. Anadarko is sitting on 10,000 future horizontal drilling targets spread over a quarter million acres in the Delaware Basin (a stacked pay zone in the heart of the Permian offering some of the best well economics). According to Morningstar, these wells are easily capable of driving 20% annual oil production growth over the next five years.

Then finally in December I brought readers an update on the first post-merger quarterly report.

Now with that out of the way, I’m sure many of you who’ve followed along with OXY’s drama are wondering how the recent headlines may fit into the picture.

Oil Spikes, Then Eases Back

Hostilities in Iran (the world’s fourth-largest oil-producing nation) rattled the markets and sent crude prices higher. Brent crude recently hit a three-month peak of $70 per barrel before easing back. 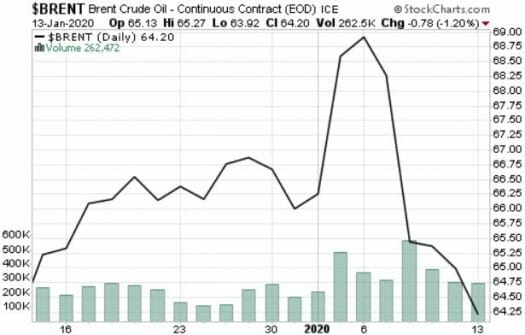 The last time we reached that level was September 2019. That was shortly after a missile strike (blamed on Iran) destroyed a Saudi Arabian production facility and disrupted global supplies.

(My colleague Amber Hestla published a sober rundown of the recent events here.)

There’s speculation that if the conflict deepens and Iran blocks the Strait of Hormuz, oil prices could race to triple-digit territory. More than 20 million barrels of Middle East oil passes through the narrow waterway daily, most of them bound for Asian markets.

But let’s not get ahead of ourselves.

I expect we’ll continue to hear saber-rattling from both Washington and Tehran in the weeks to come. And we can’t rule out further retaliatory strikes. But for now, the threat of all-out military engagement appears to be defused.

Already, the market is turning its attention back to economic matters, such as the December jobs report. But it has been a nice ride for OXY. The stock has spiked more than 10% in the early days of 2020.

But rising oil prices aren’t the only reason.

Investors are also heartened by the news that Occidental plans to unwind its majority stake in Western Midstream Partners (NYSE: WES) to less than 50%. Western was Anadarko’s midstream infrastructure arm, which Occidental inherited in the merger. The partnership, whose portfolio includes strategically-located pipelines and processing plants, has a market value of $9.1 billion.

OXY has also benefited from a bullish Wall Street report. Citing strong performance in the Permian Basin and visible future dividend growth, an analyst upgraded the stock and raised his target by more than 30% to $58 per share.

OXY has been a dividend machine. The company has reliably hiked payouts for 15 straight years (even when oil prices have fallen), boosting annual dividends from $0.55 per share to $3.16 over that time frame. That’s an increase of nearly 500%.

The stock struggled mightily last year over concerns that the Anadarko merger saddled the company with too much debt. But in less than five months since closing the deal, Occidental has already paid off $7 billion in borrowings. And it continues to raise cash by selling off non-core pieces – most recently hauling in $565 million from the sale of Houston office complexes.

The goal is to raise $10 to $15 billion. Management now expects to “exceed the upper end” of that target by the middle of this year. OXY also signed shrewd joint venture deals that will allow it milk acquired acreage without shouldering all the cost alone.

The top two priorities right now are to deleverage the balance sheet and strengthen dividend coverage. Both of which should please the market…

Bottom line: I continue to rate OXY a “Buy” for patient investors.

This road is heading straight to a massive deposit of the most useful metal on earth. There’s more than $20 billion of the stuff lying in the ground right now… and it’s coming out soon. Your share could be worth $312,000—if you act before the end of January.