Want To Score Big-Time Gains? Get To Know The 3 Types Of Breakthroughs…

Well, aside from the fact that all have skyrocketed over the past decade, there really not much in common on the surface. But even with product lines ranging from nail polish to data storage devices, there is one very critical trait they share.

They all devote many hard hours (and many millions of dollars) to new product development.

Take Regeneron, founded thirty years ago by a group of physician-scientists. The company invests heavily to develop effective biologic treatments for cancer, asthma, and other ailments. Those drugs have brought in $13 billion in revenue over the past year. And management dutifully pumped $3.335 billion right back into research & development (R&D) over those twelve months, a 16.3% increase year-over-year.

That means the company is reinvesting one-courth of its sales to fuel the discoveries of tomorrow. Other businesses might earmark a nickel of every dollar or less. And those investments have paid off handsomely. Regeneron currently has a robust pipeline of promising candidates awaiting clinical trials and FDA approval – including several potential blockbusters.

Investors don’t always appreciate the unsung efforts of professionals toiling away in research labs. But this is the nursery of new ideas and advances. And the fruits of their labors are plain to see – REGN has bestowed shareholders an eye-popping return of more than 3,300% since going public in 1991. Even more recently, investors have been rewarded with more than 300% over the past ten years… 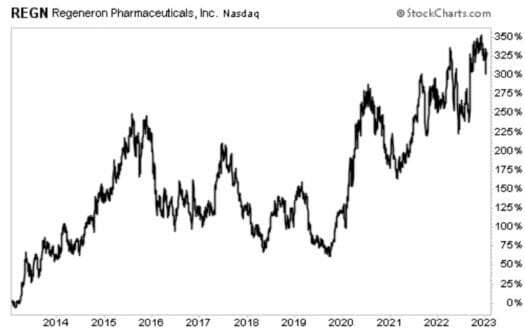 It stands to reason that tomorrow’s winners are on the cusp of big breakthroughs today. There’s no better place to begin looking for these future stars than the research and development (R&D) department.

R&D is often referred to as the lifeblood of a company, and for good reason. Without enough ideas circulating through the system, even powerful firms can wither up and die. By contrast, forward-looking organizations with a culture of innovation typically find ways to elevate their products, engage customers, and generate market-beating returns for shareholders.

I classify R&D breakthroughs by their potential to shake the ground around them.

Incremental Innovation: These are fairly common (though still important) tweaks that enhance existing products. Think of Hershey (NYSE: HSY) sweetening its chocolate Kisses by filling them with cherry or peanut butter – a new twist on an old favorite.

Breakout Innovation: This next level involves bigger enhancements that raise the bar for all other players. Remember the days of bulky televisions made with cathode-ray tubes? Flat-panel displays have made them a relic of the past. They’ve also juiced sales up and down the chain, from glass-maker Corning (NYSE: GLW) to electronics retailer Best Buy (NYSE: BBY).

Game-Changing Innovation: These financial earthquakes can be orders of magnitude more powerful than the first two. They not only transform an industry, but also create brand new ones from scratch. For example, advancements in the microchip during the 1970s launched the personal computer revolution. This opened up a whole new world for pioneering firms like Microsoft (NYSE: MSFT), Intel (Nasdaq: INTC), and Dell (Nasdaq: DELL).

Those of us old enough to experience firsthand the music of the early 1980s probably recall the transition from vinyl and 8-tracks to cassette tapes. You may even have fond memories of listening to Duran Duran or Van Halen on your first Sony Walkman. I know I do.

Then there was the giant leap to CD players, with their space-age look and superior sound quality. But then even CD players took the first step towards obsolescence when a South Korean company introduced the first digital audio MP3 player in 1998. Apple (Nasdaq: AAPL) was quick to spot the potential in this new technology and immediately laid the groundwork for what would later become the iPod.

Music is no different than anything else. Take almost any product – from golf clubs to video game consoles – and technology has upgraded it over the years… or replaced it entirely.

This never-ending process of creative destruction can be a double-edged sword for investors, punishing businesses that are behind the curve and slow to adapt, while greatly rewarding those on the cutting edge.

That’s why it pays to keep an eye on R&D expenditures (yes, even income investors).

Effective advertising campaigns are nice. And who doesn’t love to see a business gaining a point or two of market share? But truly explosive growth (and stock appreciation) is always triggered by something bigger.

Latching on to an explosive breakthrough like the iPod is akin to catching lightning in a bottle. But even smaller innovations can whip up excitement in the market and generate big gains for shareholders – long before the products themselves ever hit store shelves.

As consumers, we can see innovation all around us, from GPS-enabled cell phones to cars that can actually parallel park themselves. But investors must be quicker to the punch and anticipate developments before they occur, not after they become the status quo.

Legendary hockey player Wayne Gretzky scored a record 894 goals during his remarkable career. When asked his secret, he replied: “skate where the puck is going to be, not where it has been.”

Investors would do well to follow that sage advice. The market is a forward-looking pricing mechanism. And few things impact tomorrow’s profit quite like today’s research and development activity.

That doesn’t mean you should just blindly invest in companies that are throwing around buckets of cash. Like anything else, you’ll want to see a return on that investment. Some failure-ridden firms continually pour money into black holes with little to show for it. Look for tangible signs of success… patents, intellectual property rights, and a proven history of bringing viable new products to market.

In the meantime, I’ve also got my eye on the energy sector, and so should you…

I’m predicting we’ll see the “mother of all oil booms” — thanks to the latest monster find in the Permian basin. And it could unleash a wave of deals in this sector that could give investors the opportunity for incredible gains…

In my latest report, I explain what’s happening — and how we can get in now before the rumor mill picks up, potentially giving you the chance to pocket triple-digit gains, overnight. Go here now to learn how to profit.