Coronavirus And Macau: What You Need To Know

As you have likely heard, the deadly Coronavirus sweeping through China has now claimed 132 lives and spread to more 17 countries (including the United States). There have been 6,000-plus confirmed cases of the contagious virus. Several cities near the epicenter of the outbreak have been put on lockdown.

Roughly 60 million Chinese citizens are affected by the quarantine and travel ban.

While health officials debate the best ways to contain the virulent respiratory illness, investors are already dealing with the potential economic impact. Parallels are being drawn to the SARS epidemic in 2003, which erased $40 billion in global stock market value. This outbreak is expected to be more severe.

Those fears have infected the market, sending the Dow stumbling nearly 400 points on Monday (although some of that loss was erased Tuesday). Airlines, hotels, and other travel-related sectors are experiencing the brunt of the selling.

Casinos Taking It On The Chin

Given their dependence on the Macau market, casino gaming companies are also deeply in the red.

When I checked on Monday, Las Vegas Sands (NYSE: LVS) was off about 6% and Wynn Resorts (Nasdaq: WYNN) was down 7%.

These are both stocks that China-focused investors watch closely. They’re popular plays on the Chinese growth story – and they both pay nice dividends as well. In fact, we’ve owned LVS in the High-Yield Investing portfolio since January 2019. (And despite the negative headlines recently, we’re up close to 20%.)

Maybe you’ve followed my advice in the past and bought LVS. Or you could be wondering whether it makes sense to scoop up shares on the dip.

So here’s my take…

LVS: A Brief Look At The Numbers

LVS bottomed out near $53 in early October. But the tables turned, and the stock rebounded nearly 30% over the next couple of months. On December 13, it touched a fresh new 52-week high of $69.72. Then, it surged even higher – to $74 in mid-January.

Shares have since given up a lot of those gains – and now sit around $64. 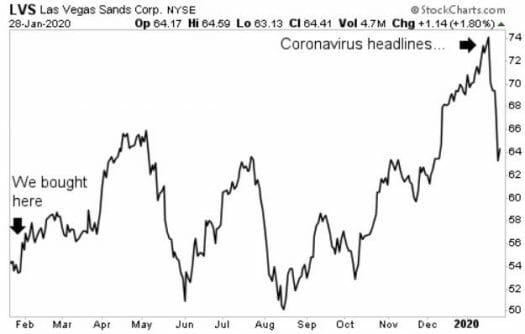 It’s worth noting, however, that the previous rally came despite sagging gaming revenues in the core Macau market. Macau casinos took in $2.84 billion last month – not a bad haul, but down 13% from a year ago. That follows a 3% decline in October. If you recall, that’s when anti-government protests in nearby Hong Kong disrupted travel and deterred the play of high-roller VIPs.

So if LVS managed to rally during that bit of turmoil, then it stands to reason it could happen again. After all, while Las Vegas Sands certainly does court its share of Chinese “whales,” it also has mass-market properties that cater more to everyday visitors. Lower-limit tables and slots account for over 50% of its gaming wins, a far higher proportion than most peers.

This segment of the market tends to spook less easily than VIPs. Macau welcomed 36 million visitors in 2018, a number that has been growing at a steady 5% pace the past several years.

Except for the time being, entire cities are on lockdown. So it looks like this time could be different.

So will the coronavirus hurt those numbers? Probably.

But while Macau will remain the key growth driver for the foreseeable future, I’m pleased to see Las Vegas Sands expanding its flagship Marina Bay Sands resort in Singapore and lobbying for an operating license in Japan.

Still, considering even epidemiologists aren’t sure how far and fast the Wuhan virus will spread, I think this selloff is justified. The timing is also unfortunate, putting a damper on China’s Lunar New Year holiday. Hundreds of millions typically travel during the week-long celebration – a big draw for Macau’s resorts.

In any case, I told my subscribers that LVS was fully valued before the recent coronavirus news. The stock advanced well beyond its historical Price/Cash Flow multiple.

I don’t intend to sell here, especially with a recent breakthrough in U.S./China trade relations. But with all this in mind, we just put in a protective stop loss at $61 per share to lock in gains. If the shares retreat below that level, I will look to re-enter a position once the panic has subsided.

P.S. If getting paid 10% (and more) on your money every year sounds good – even before capital gains – you need to check this out…

I’ve spent 18 years finding income in places most investors never think to look. Now, with the Fed keeping interest rates near zero, this report will tell you about the best double-digit options you have left.