2 Simple (But Powerful) Technical Indicators You Need To Know About

Some folks may think it’s “witchcraft,” but understanding technical analysis can be very helpful — and profitable — when it comes to investing.

There are a number of technical indicators out there. For instance, some folks like to check on a stock’s MACD (moving average convergence divergence) oscillator, which can help determine a stock’s trend and momentum. Or they might keep an eye on a stock’s moving average with Bollinger bands. Then there’s the Relative Strength Index or RSI for short.

But one of the simplest indicators to look at is a stock’s 50-day and 200-day moving average. These two moving averages represent the average price of the stock over these respective time frames. The 50-day, of course, is a short-term tool, while the 200-day is used to judge longer-term price trends.

Introducing: The ‘Golden Cross’ And The ‘Death Cross’

Now, simply looking at moving averages will often not get you very far when analyzing a stock. But every so often, we find key bullish and bearish formations using these indicators, known as either a “death cross” or a “golden cross.” 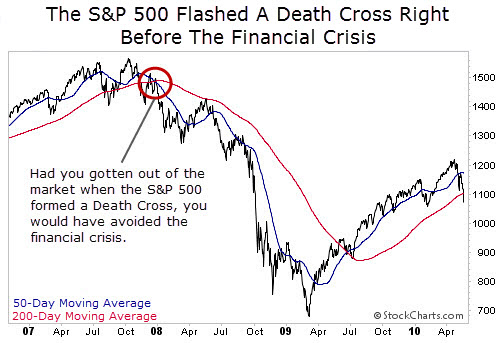 Those who followed this bearish indicator would have avoided nearly the entire market crash.

The S&P 500 formed a golden cross roughly three months after bottoming out, signaling it was time to get back into the market. 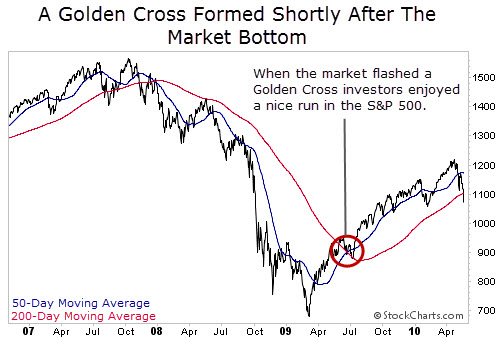 This simple technical indicator would also have helped you avoid the dot-com bust in the early 2000s and the financial crisis in 2008-2009. But more importantly, you would have been back in the game just shortly after the market bottomed in both cases.

You can see from the two charts above that this is a powerful indicator. It can help you determine not only when to get out of the market at critical junctures, but also when to get back in. Granted nothing is for certain when it comes to investing. But this can be another tool in the toolbox when trying to make critical decisions in the market.

P.S. In the meantime, if you want to reap outsized gains in the New Year, then you need to check out the latest from my colleague, Nathan Slaughter…

Tucked away in the middle of the desert in West Texas lies the epicenter for one of the biggest oil finds he’s ever seen. There’s already a massive wave of deals happening here – but according to Nathan, we haven’t even seen the beginning.

In his latest report, Nathan will pull back the curtain on this massive boom — and the one small company that’s right in the heart of all the action. By getting in now before the rest of the crowd, you could pocket triple-digit gains, potentially overnight.