How I Found One Of The World’s Greatest Businesses

Many of my longtime readers have seen me refer to certain companies as on of the “World’s Greatest Businesses.”

You know these companies when you see them. And that’s because they all share a few things in common.

But in my book, in order for a company to fit the bill of “World’s Greatest Businesses,” a company must meet certain criteria. The bulk of that criteria revolves around a firm’s economic moat — a term popularized by Warren Buffett.

The better a company’s economic moat, the more competitive advantages it has. Here are a few key characteristics to look for when identifying a company with a strong economic moat.

3 Signs of a Great Business

Switching costs or high barriers to entry. Think of switching costs as what happens when you decide to change a long-tenured bank account that has all your automatic withdrawals, and automatic payments hooked to it. You might hate the bank, but the daunting task of switching over all your bills, debit card, and credit card numbers keeps you at that bank.

Corporations bank on this. The inconvenience factor keeps customers from changing from one product to another.

High barriers to entry, on the other hand, are intangible assets. This could be patents, government licenses, or some other regulation that keeps competitors from quickly entering the industry and taking market share.

Telecommunication companies are a good example. You can’t simply start a new company to compete with Verizon or AT&T. First, you would need to shell out millions, or even billions to acquire spectrum (regulated by the Federal Communications Commission), and then build out your network. This high barrier to entry makes it tough to even get started in order to compete with the big dogs.

Another attribute is cost advantage. Companies that can produce goods or services at a lower cost can undercut competitors and achieve higher profitability.

A network effect is a relatively newer characteristic. The more people use the good or service the more invaluable it gets. Facebook (Nasdaq: FB) is a good example of a company with a strong network effect. It’s the clear-cut social media leader with Facebook, Instagram, Messenger, and WhatsApp.

Facebook’s network effect makes it difficult for users to simply leave the social media platform because they aren’t just deleting their page, they are leaving behind friends, contacts, memories, pictures, and more.

A World-Class Business That Dominates Its Market

Just recently, my Maximum Profit system flagged a company that checks a lot of the boxes required to be considered one of the World’s Greatest Businesses.

That company — Autodesk (Nasdaq: ADSK) — is a market leader in the computer-aided design (or CAD) industry.

The company benefits from high switching costs and a large network of users. Once one of Autodesk’s customers forks over the cash and learns its platform, it will be very difficult to pry that customer away to a new platform… Not only in terms of monetary value (of purchasing new software) but also implementing and learning the new CAD platform, which could set a company back for months.

Autodesk’s economic moats have allowed the company to command nearly a third of the CAD market, with especially strong positions in the architecture, engineering, and construction markets.

This market dominance allowed the company to grow sales by 25.9% to nearly $2.6 billion in fiscal 2019. Gross profit came in at more than $2.2 billion, giving the company a gross profit margin of 88%.

Moving onto the cash flow statement, Autodesk pulled in $377.1 million in cash flow, which is a far cry from the roughly $1 million it made in 2018. 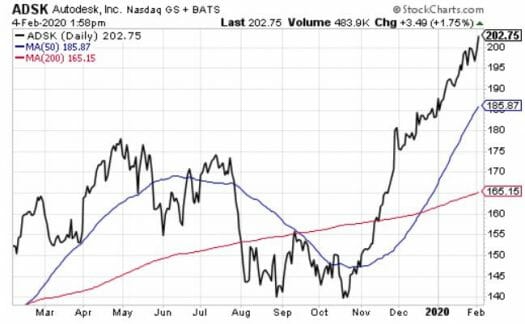 Strong sales and cash flow growth are helping this stock reach new heights. Autodesk’s market-leading position and high switching costs definitely qualify it for status as one of the World’s Greatest Businesses. Investors interested in this high-quality name should take extra note, since this isn’t one of the usual high-flying suspects that we always hear about in the mainstream financial media.

Editor’s Note: Nothing else has done so much good for so many people for so long…

Since the dawn of civilization, people have relied on this special material to make life better. The ancient Egyptians performed complex medical operations with it. Henry Ford couldn’t have made his first Model T without it. And we’re still finding new uses for it today — in computer chips, hospitals, home appliances, you name it.

And here’s the part that could make you a lot of money… A small company in Alaska has found 7.8 billion pounds of this stuff 48 miles north of the Arctic Circle. It’s currently worth more than $20 billion. They’ve been waiting five years to dig it up. And it looks like they are finally going to get the go-head.

Once the word gets out, this $2 stock should jump big time. Get the full, incredible details right here.