When I was a kid the only video games around were basic, pixelated games on the Atari and Nintendo game consoles. And while I enjoyed playing Pac-Man, Duck Hunt, and Mario Bros, it all pales in comparison to what’s available today.

In fact, there’s a massive revolution happening in video games right now. You may not know about it, you may not understand it, you don’t even have to like it… It doesn’t matter. It’s happening.

And investors, we need to know what’s going on in this space – because we’re talking about a huge mega-trend with a lot of potential…

2X Larger Than Hollywood… And Growing

You may not have ever played “Fortnite” (one of the most popular games today), or League of Legends, or Call of Duty… or any video game for that matter. But you probably know someone who does.

This isn’t some fad that will fall to the wayside either… More than 160 million Americans play video games. Worldwide, an estimated 2.5 billion people play video games. That’s nearly one-third of the global population.

The gaming industry is growing at a compounded average rate of 21%.

As technology has rapidly evolved, so too has the gaming industry.

If you’re not really familiar with the video game business, then find the nearest youngster in your life. Child, grandkid, nephew, doesn’t matter… Ask them about the games they play — and maybe to even show you how they work.

Many of these games boast incredible graphics. Trust me, you wouldn’t believe how good they are. And they’re played on consoles with extremely fast processing speeds such as powerful “gaming” PCs, Playstations, and Xbox’s. That said, you can also pick up your smartphone or tablet and choose from hundreds of thousands of games that you can quickly download and play.

The most-played PC game in the world is called League of Legends… It was released a decade ago.

The Call of Duty franchise — a first-person shooter game — generated more revenue than the entire Marvel and Star Wars franchises commanded at the box office, combined.

Fortnite, created by Epic Games, is arguably the most popular game right now. Fortnite is a “battle royal” game where competitors eliminate opponents to be the last man (or team) standing. Just to give you an idea, Fortnite raked in roughly $1.3 billion in 2018 on PC, with an additional $455 million from iPhones. It also dished out $100 million in prize money for 2019, including a $30 million purse for a three-day tournament hosted at Arthur Ashe Stadium in New York.

Needless to say, a market this huge (and growing at a double-digit clip) creates wonderful investment opportunities.

The Largest Gaming Company In The World…

But the good news is that we already own a good chunk of Epic Games through our Tencent (OTC: TCEHY) holding in Top Stock Advisor.

The Chinese conglomerate is the largest gaming company in the world in terms of revenue. In 2018, it earned more than $19 billion in gaming software sales, representing 18.4% of the global market. And it owns nearly half of Epic Games.

It’s not only Fortnite and Rocket League that Tencent owns either. It also owns Riot Games, which is the developer of League of Legends, the most popular PC game in the world.

Here’s a rundown of Tencent’s ownership of game developers: 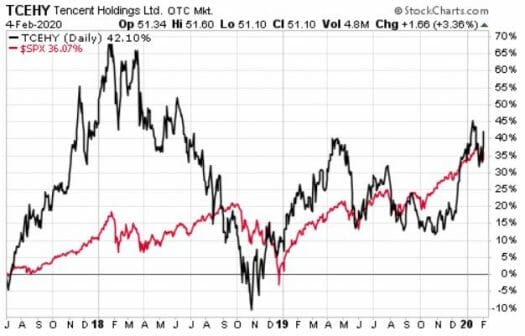 But, honestly, the biggest downside of Tencent is Chinese regulations…

China has halted the approval of new video games, as well as implemented a curfew on online gaming for minors (those under 18 years old). Minors are banned from playing video games online between 10 PM and 8 AM. They also can’t play for more than 90 minutes on weekdays and three hours on weekends and holidays. The government also imposed a spending limit for minors, which means they have a certain allowance that they can spend per month on games.

These heavy regulations put a damper on Tencent, as well as other companies developing games hoping to reach the world’s largest gaming market (China). Still, investors looking for a good catch-all play on multiple publishers and other gaming trends could do worse than Tencent.

Thankfully, in the United States, investors are likely more familiar with video-game publishers that will benefit from this mega-trend. For the sake of time and space, I will likely save my take on these stocks for a follow-up article. So stay tuned.

P.S. In the meantime, I want to ask you something controversial…

Did you know the most common health problem that afflicts older Americans is chronic pain? One in five Americans suffer from pain that resists conventional treatment. And until recently, all existing treatments had harmful side effects (like addiction).

But one biotechnology company has developed a new addiction-free cure… And its stock price is primed to take off. Our research team has uncovered this hidden biotech gem — and they say now’s the time to invest. Go here to learn more.