A few weeks ago, I put the finishing touches on my annual report for Top Stock Advisor subscribers.

If you’ve been with us a while, then you know just how lucrative our Top 10 Stocks report for the next year can be. It’s easily one of the most important pieces of research we do each year…

We spend a lot of our research efforts digging through hundreds of investment ideas, SEC filings, earnings reports and analyst reports. The goal: identify what we believe are the best investment opportunities for our subscribers.

We wouldn’t continually waste our efforts if it didn’t prove fruitful. Over the years our hard work has paid off handsomely for our readers… and our Top 10 Stocks report in particular has proven to be one of our most anticipated reports each year. 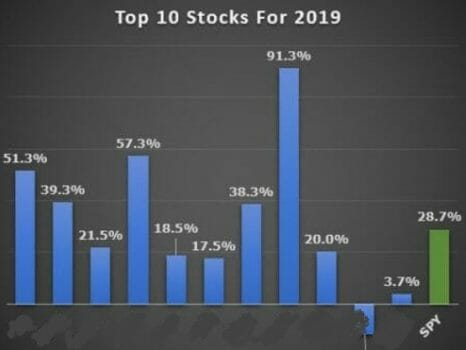 So it’s easy to see why this has become one of StreetAuthority’s most popular — and profitable — reports.

(Note: I have it on good authority that we’ll be opening up access to this report for new subscribers very soon. So if you’d like to get this year’s report, drop us a line and we’ll put you on the list…)

This year’s report is full of surprises. Some of our picks will likely raise a few eyebrows. For example, you’ll find a company that’s fighting one of the world’s greatest epidemics…

And as you’ll see in just a moment, a few of this year’s picks should benefit from the 2020 Presidential Election.

And on that last note, I’d like to share our analysis for one of this year’s picks. Now only should it benefit from the election season, it’s also one of the most undervalued stocks I’ve come across in quite some time…

Our Most Controversial Pick Yet?

American Outdoor Brands (Nasdaq: AOBC) traces its roots back to 1852… before the Civil War. The firearm maker was previously known as Smith & Wesson, but the company changed its name at the start of 2017 to reflect that it sells more than just guns.

However, the sale of firearms — pistols, revolvers, and rifles — makes up 75% of the firm’s total sales. The remainder of sales comes from other outdoor products and accessories, including knives, flashlights, tree saws, hunting gear and apparel, as well as survival products.

Now before we dive into the reasons why this company made the list this year, I know many investors might not like the idea of owning a company whose primary business is the production of firearms. That’s completely fine, and I understand that.

But our job is to ferret out companies that have solid fundamentals, trade at a discount to their intrinsic value, and poised to outperform over the next 12 months. American Outdoor Brands fits that description.

American Outdoor Brands could see a major catalyst this year… and that’s the 2020 Presidential Election.

You see, the focus of the election will surely be healthcare, climate change, and guns. These are each polarizing topics, but none more so than our 2nd Amendment: “A well regulated Militia, being necessary to the security of a free State, the right of the people to keep and bear Arms, shall not be infringed.”

Regardless of your stance or opinion on this dividing topic, one thing is for sure… Americans love their guns. According to the CIA World Factbook, there are an estimated 120.4 guns per 100 U.S. residents. That puts the United States as the only country in the world with more guns than people.

When that love for guns is threatened by stricter gun regulations, folks go out and buy more guns. And nothing stokes those fears — and sales — more than when a Democrat in the White House.

We’ve Seen This Movie Before

In other words, sales more than tripled during President Obama’s presidency. And it should be noted that once President Trump was elected — and fears of stricter gun laws subsided — American Outdoor Brands’ revenue has declined in each of the last two years.

More importantly for shareholders, during that same period, the stock rallied more than 600%. 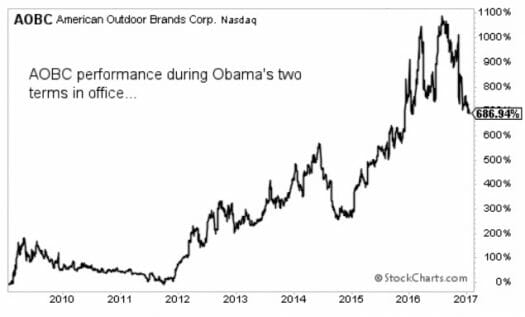 Shares traded for around $30 per share at the end of Obama’s presidency. Today, during the Trump era, as worries over firearm restrictions have subsided, shares of AOBC trade for less than $10. 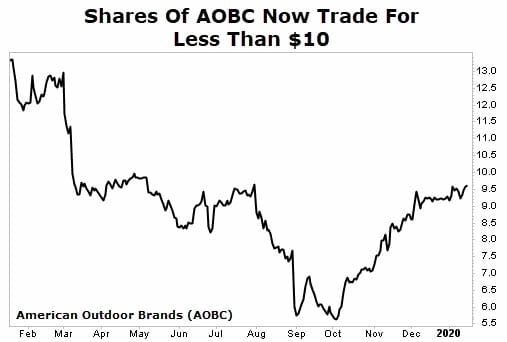 Now I’m not saying that a Democrat is going to win the Presidency. But it doesn’t really matter if Trump wins or a Democrat wins… Shares of AOBC should see a significant rally regardless…

You see, in the last year, shares tumbled as much as 50%. And they’ve shed as much as 80% of their value since the 2016 highs. Right now, shares of AOBC are trading for cheap.

For its fiscal 2019, which ended April 30, 2019, the gunmaker had sales of $638.3 million. That was a slight 5% increase over the previous year. Analysts expect the company to once again increase sales for its fiscal 2020. Once fiscal 2020 ends, it should also mark the time when the general election campaign really heats up. And I think sales could very easily take off around that time…

Right now, shares are trading for just 0.8 times sales. This is a 50% discount to the stock’s five-year historical average.

The company has produced positive free cash flow for over 10 consecutive years. Remember, free cash flow is the money left over after all the bills and capital expenditures have been accounted for.

American Outdoors Brand (AOBC) is a “Buy” when shares trade for less than $10.50 per share.

Editor’s Note: According to reports, one of President Trump’s top priorities for 2020 will be the rollout of the brand-new 5G cellular technology. In fact, he’s demanding it be implemented in the U.S. as soon as possible. And because billions of dollars are at stake, you can bet every telecom company in the country will fall into line and double down on their efforts.

There’s just one problem… A “fatal flaw” could ruin the entire network. And if we don’t act fast, we’ll lag far behind countries like China. There’s still time, but the telecom companies will have to find a partner, like the one we mention in this exclusive report.