What do Botox, Lantus (a form of insulin), and Humira all have in common?

They are all derived from living cells. They are also examples of biologics, or biological medications.

The biologic drug market is one of the fastest-growing markets in the biopharmaceutical space. In 2017, it was estimated to be a $200 billion market and projected to grow at a rate of 8%-10% annually over the next five years.

Biologics tend to be at the forefront of medical advances today. Gene-based and cellular biologics, for example, have made it possible to treat illnesses that had no prior treatments. These powerful medications are derived from living sources — mammals, birds, insects, plants, and even bacteria.

Because they come from such diverse sources, and are living, biologics are much more complicated to produce than other drugs. It takes an enormous amount of work to purify, process, and produce the ingredients for biologic drugs.

For this reason, many of the large biopharmaceutical companies turn to a company I added to the Maximum Profit portfolio a little over a month ago.

The company is Repligen (Nasdaq: RGEN).

Repligen is a major supplier to the biopharmaceutical industry. Its portfolio includes products that help in the purification and quality control of biologic drugs, the growth, development, and filtration of biologic drugs, and proteins which are used primarily in antibody-based therapeutics.

Around 2012, the company made the decision to pivot and focus almost exclusively on biologic drug development. Its customers include Merck (NYSE: MRK), GE Healthcare, and Purolite Corporation. Since then, it’s become a market leader in many of the areas it operates.

What’s more, it has minimal exposure to the success or failure of drug trials, the commercial success of a drug, or drug pricing in general. This means, essentially, Repligen benefits from the growth in demand for biologics, without much of the downside potential.

In 2018, the company pulled in $194 million in sales, which was a 37.4% increase over 2017. It will report fourth-quarter and full-year results on February 20. But through the first nine months of 2019, it’s already generated more than $200 million in sales. Analysts have estimated that Q4 sales will be $68.5 million, which would put full-year 2019 sales at just over $268.5 million. That would be a 38.4% jump over 2018.
In short, Repligen is experiencing tremendous revenue growth. This has translated nicely into strong profits and cash flow.

This $5 billion market cap company has been profitable for the last seven years, posting an average net profit margin of 12.8%, which tops industry peers.

More impressive is the firm’s cash flow growth. In 2018, it produced $32.8 million in cash flow, a staggering 87.8% improvement over 2017. It’s on track to continue that impressive growth in 2019. Through the first nine months of last year, it has already topped what it made in all of 2018, pulling in $50.2 million in cash flow. 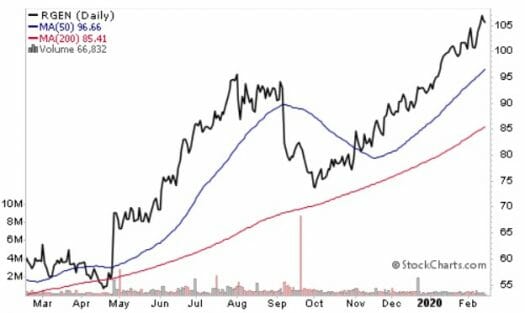 Biologic drugs are a game-changer. Demand isn’t going to slow down anytime soon. And the big drug need companies like Repligen to continue developing innovative treatments, so it should benefit from this trend for quite some time.

Should Repligen fail to innovate or lose out on key customers, however, that will drastically hurt sales and profits. Also, a hiccup at one of its manufacturing facilities causing delays would likely put a damper on shares.

I see this as unlikely, but it’s always a possibility. In the meantime, Repligen is a key player in the growing biologics industry and generates substantial cash flow. These attributes should help the company soar to new heights.

Editor’s Note: You probably already know that the big media companies are battling over what comes next after cable TV. And if you’ve been wondering who will win the streaming wars (Netflix, Amazon, Apple, etc.), then you need to see this…

You see, there’s big money to be made from The Streaming Wars… but you need to know where to look. The good news is, our research staff has done the homework for you.

For our report on the companies that are poised to win the fight, go here now.