What You Should Do When A Put Is Exercised…

Exercise. For many people in late February, that word represents a long forgotten New Year’s resolution.

But for options traders, it’s a word that represents a significant component of any income strategy.

I worry that, for some of us, exercise has become a forgotten risk. That’s because it’s been so long since we’ve dealt with it — especially if you’re a part of my premium Income Trader service. Part of the reason we haven’t faced the risk in months is that I’m constantly thinking about it.

When we’re talking about selling a put option, “exercise” is what happens when the person who bought our option asks us to fulfill our side of the contract. When this happens, your broker requires you to purchase shares of the stock at the strike price.

What Happens When A Put Is Exercised

Let’s consider what it means when a put is exercised. Let’s say we sold a put with an exercise price of $100 and, at the expiration, the stock is trading at $90. Because the stock is below the exercise price, our broker will require us to buy the stock at $100 a share.

[See also: My Puts Just Got Assigned – Now What?]

Before committing capital, we should consider whether buying the stock is still the best course of action.

First, it’s important to consider whether the company’s fundamentals have changed. In many cases, when the stock is below the strike price at expiration, there is a change in the fundamentals and the stock might not be attractive.

For those of you who subscribe to my Income Trader service, this is more likely to be a risk with our Bonus Trades. As you may know, those trades pass all of my primary screens, but they don’t get the deep dive our regular recommendations get. Normally, I don’t follow up on these trades with continued updates. They’re meant to be made by more experienced readers who feel comfortable making decisions about what’s best for their portfolio.

However, today we’re going to look back at a recent Bonus Trade in Ally Financial (NYSE: ALLY). It offers a prime example of how we should consider exercise risk.

On February 5, I recommended selling the ALLY March $30 Puts. At that time, the stock was at $32.86. Two weeks later, the company announced an acquisition, and the stock dropped below $30. That means the put is at increased risk of being exercised at expiration.

What’s important to note here is that the fundamentals changed with the acquisition. ALLY has consistently generated profits from auto loans. Just 12% of its loans were classified as subprime in its latest regulatory filings. But the company announced that it has bought a multibillion-dollar portfolio of subprime credit card assets. 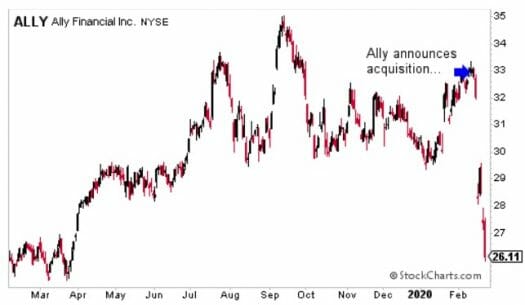 This is a new market for ALLY. It involves different borrowers and different products, since auto loans are collateralized and credit cards are not. Obviously, the market didn’t like it when the news was announced. And this deal could be profitable, or it could be problematic. Obviously, management is confident that the new business will be profitable. But it also means there is more risk in ALLY today than there was on February 5.

The decision to accept the stock requires an analysis of the new risks. It could take several quarters for management to convince investors they can manage the risks of subprime clients with non-secured debt.

One alternative is to close the position with a “buy to close” order for the puts. At the recent closing price of $26.11, the net loss on the position would be about $359 per contract.

Another alternative is to accept the shares of ALLY when the option is exercised. Doing so means understanding it could take months, or more, for the stock to get back to the breakeven price. The dividend yield of 2.6% could cushion that risk for some investors.

There is also the opportunity to sell covered call options to generate additional income to offset your cost basis.

[Related: How To Evaluate Risk And Reward With Put Options]

In short, there are many factors to consider when a put is about to be exercised. Because it’s been so long since we have faced this risk over at Income Trader. And if you’re familiar with put options and have been making trades in this rip-roaring bull market, that’s probably been your experience recently as well.

But it’s worth highlighting this scenario, as market volatility has picked up in the past couple days. We can still be profitable in this environment, but we need to be careful. As I’ve mentioned before, the options strategy I follow has identified winning trades in every market environment over the past seven years. And it’s all thanks to the award-winning indicator I developed.

Most of my new subscribers had never traded options this way before… and they are now making thousands… even tens of thousands of dollars in extra income. Every month.

Since we launched Income Trader in 2013, we’ve closed 219 trades… and we made money on 199 of them. That’s a 90.9% win rate. Readers who followed my weekly trades and sold 10 contracts each time have collected nearly $2,500 every month. If you’d like to be one of them, simply go here now.