Here’s Why You Should Consider Homebuilders Right Now…

It was a painful and expensive learning experience — to the tune of $65,000. But you learn the most from failures and mistakes. And you can bet that I wasn’t going to make that sort of mistake again.

I read, studied, and did everything I could to understand how it all went wrong…

Of course, I wasn’t the only one that got caught up in the euphoria of real estate pre-2008. And there are likely thousands of stories similar to mine. I just hope they have all taken a similar approach to learn from their mistakes, so it doesn’t happen again.

My guess is, however, that many people vowed to never invest in real estate again (outside of their personal home).

I’ve also noticed that the housing collapse has given folks a warped view of the industry… Everyone I talk to thinks houses are expenses and this housing boom is over. Everyone is waiting for home prices to fall 50% or more like it did during the financial crisis.

But I think they’re wrong…

Those that are waiting for home prices to collapse to financial-crisis levels to purchase a home will be left behind.

To be clear, I don’t think home prices will continue climbing at the same rate we’ve seen over the last five years. If anything, home prices will level off and likely even fall a little bit. But I’m not sure we will see another housing calamity like we witnessed a decade ago in our lifetime.

The Housing Market Is Still “Feared”

To give you an idea of just how terrified people are of the housing market we only need to look back a few years.

In 2017, the SPDR S&P Homebuilders ETF (NYSE: XHB) had its best annual performance in five years. The ETF soared 32% — topping the S&P 500’s healthy 19% return. But as the Federal Open Market Committee (FOMC) continued to gradually increase interest rates investors began to question the state of the housing market.

They were worried about the affordability of homes as we had seen a strong rebound in home prices since 2012. Throw in higher interest rates, and slowing new home sales data, and investors ran for the hills.

In 2018, homebuilders tumbled 30%, wiping away the returns it earned over the last three years. 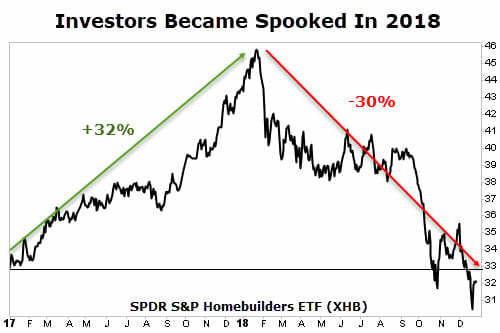 What investors perceived as bad news on the housing front quickly brought back memories of the 2008 housing bubble. Nobody wanted to be caught in a similar situation, so they dumped housing stocks.

But taking a step back, it wasn’t as negative as investors perceived…

Historically, housing affordability has averaged a reading of around 140. When the National Association of Realtors released its latest reading for December 2019, it came in at 161.8, which means that a family with the median income had more than enough income to afford a median-priced home.

So, despite the increase in home prices, housing affordability remains above the historical average.

A large part of the appreciation of homes has been because demand has outpaced supply. Ever since the housing bust a decade ago, builders have been reluctant to ramp up production. Housing starts remain low, and so is the existing housing supply. 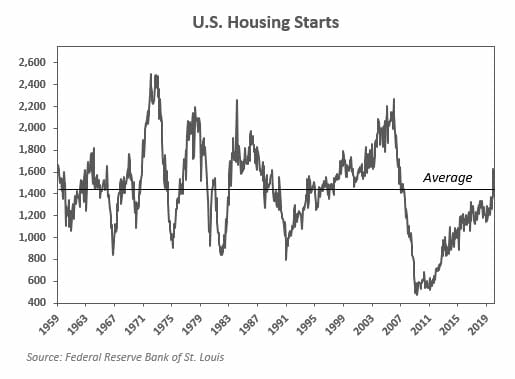 Builders simply haven’t built enough houses to keep up with demand, which means there aren’t enough existing homes on the market. In fact, according to the latest data, it would take only three months to sell every existing home on the market today.

There simply isn’t enough inventory, which makes sense based on years and years of low housing starts.

The low supply, high-demand equation puts builders in a great spot to continue growing. That’s great news for investors who want to target the SPDR S&P Homebuilders ETF (NYSE: XHB) for their portfolio. But this month my Top Stock Advisor readers and I are taking advantage of this through one of the top builders in two of the fastest-growing states in America: Florida and Texas.

To learn how to get this pick, view my latest research report right here.