What To Do When Crisis Meets Opportunity

We’ve been talking about the broader market quite a lot lately. That’s because it’s been a doozy, to say the least.

Investors finally became worried about the rapid spread of the coronavirus, which has now infected more than 118,000 people globally. The market went from record highs to correction territory in just six trading sessions, which was a record.

The economic implications from the virus will be felt throughout the year. Corporations will blame the virus for not meeting sales and earnings expectations. Manufacturing out of China has come to a halt, schools have shut down, and the overall global supply chain has taken a hit.

The Federal Reserve slashed interest rates by half a percent on March 3 to try and provide some relief. But even that didn’t work, the market still tumbled. Investors have fled to safe-haven assets like Treasuries, which has pushed the yield on long-term U.S. government bonds to unprecedented levels. The yield on the benchmark 10-year Treasury note fell below 0.7% for the first time.

Nobody likes to lose money. And if you’ve followed my analysis for a while, then you know I’m a strong proponent of keeping what we’ve earned. But I also try my best to make clear, unemotional, decisions.

Has The Overall Business Really Changed?

Let’s take two widely held stocks — Facebook (Nasdaq: FB) and Alphabet (Nasdaq: GOOGL) — for example. These companies don’t rely on China for most of their business. In fact, both are actually banned in China. But folks won’t stop using Facebook, Instagram, or WhatsApp because of the coronavirus. In fact, one could argue that more people will use it.

The same goes for Alphabet. Most of its ad revenue shouldn’t be heavily impacted because of the coronavirus. Sure, some corporations might cut back some ad spend as they see a slowdown, but Alphabet’s overall business model should remain intact and strong.

The point is, it’s difficult to see hard-earned gains vanish almost overnight. But we must be able to weather the storm and make unemotional decisions.

If the volatility is keeping you up at night, then it’s okay to cut some losers from your portfolio or take some profits. You don’t have to sell the entire position if you don’t want, but get it down to a level you are comfortable with.

One thing about a market selloff is that it allows us to look back at our shopping list and find wonderful companies that have been unfairly punished and are now trading at a discount. And that’s the exact case we have with one of our longest-tenured holdings over at Top Stock Advisor…

A Great Opportunity To Own The ‘Backbone of the Internet’

Cisco Systems (Nasdaq: CSCO) has been in our portfolio since December 2011. And we’ve done well with it, up over 137% since then. But over the last seven months, shares have tumbled. 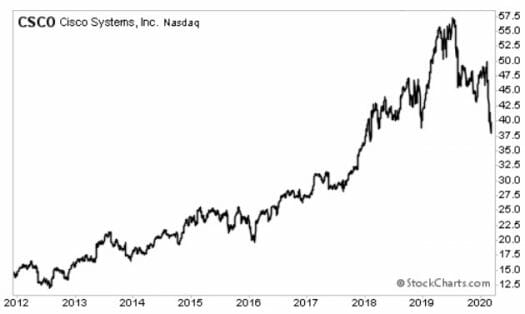 But Cisco is a world-class company that dominates its market. We’ve often referred to it as the “backbone” of the internet. It’s a market leader in networking equipment like switches and routers, but it’s also transformed its business to focus more on subscription-based services, which are highly profitable.

Right now, the company is trading for only 15.5 times earnings, 3.3 times sales, and sports an EV/EBTIDA multiple of just 9.8. All three metrics are below the company’s historical five-year averages.

Investors are down on the company because it lowered guidance for fiscal 2020, where it’s expected to produce “only” $51 billion in sales. But I see this as an opportunity for investors to buy a wonderful company trading for cheap. Cisco is a “buy” under $41 per share.

The point is, while stocks can be extremely volatile, that volatility doesn’t always represent the underlying business. We have to be able to assess the intrinsic value of the business and decide whether that business is permanently damaged. If not, then it could be an opportunity.