Gold Miners Are Worth A Look Right Now. Here’s Why…

As we continue to watch the ongoing battle against the coronavirus outbreak, last week I mentioned that gold is looking pretty good right now for a number of reasons.

I elaborated on a few of those, but I also said that I would lay out more of my thinking in a future piece. But first, a little background…

As some of you may know, I wrote a dedicated natural resources newsletter centered on commodities for several years. So I had a front-row seat to the fracking boom and subsequent explosion in North American oil and gas production.

I also witnessed the 180-degree turnaround that occurred in managerial boardrooms. In years past, the overarching goal was growth. Exploration and production (E&P) companies spent money hand-over-fist on any new project that could potentially boost output or reserves. They weren’t terribly discriminating.

Unfortunately, many of those investments backfired spectacularly. Projects that looked great on paper with $100 per barrel crude don’t make as much economic sense today. At some point, the investment community started to demand a keener focus on returns rather than growth at any cost.

As a result, there is less money going into the ground these days – and more into the pockets of shareholders.

What does this have to do with gold?

Well, for the first time, this same mentality has taken hold in the mining sector. Instead of plowing every penny of cash flow back into the hunt for the next discovery, the largest miners have become more discerning, saving their Capex dollars for the most promising developments and returning the rest back to shareholders.

Look no further than Barrick Gold (NYSE: GOLD). The company raised its dividend by 20% last year. Not bad. But last month, it approved an even stronger 40% increase, twice the size of the last one.

Shortly after, AngloGold Ashanti (NYSE: AU) went a bit further. With cash flows nearly doubling over the past year, the South African producer hiked its annual payout by 74% to $0.11 per share.

Not to be outdone, Newmont Mining (NYSE: NEM) just announced plans to lift its annual dividend distribution by 79% to $1.00 per share.

Then there’s Rio Tinto (NYSE: RIO), which also produces base metals such as copper and iron ore. The company has set aside $2.6 billion for the exploration and development of new projects over the past 12 months. But it has dished out more than double that in dividends, returning a record-high $6.2 billion ($3.82 per share).

You’ll notice that yields among this group are (mostly) still nothing to write home about. Most are generally in the 1.5% range, a safe and sustainable level. But payouts are headed higher. Not only do miners have the financial flexibility for continued hikes, but they are feeling pressure in the boardrooms as well.

Still, if this were about income alone, we probably wouldn’t be having this conversation. The truth is, we’re seeing a shrinking supply of gold that’s setting up a compelling picture for investors.

The Supply Of Gold Is Shrinking

It’s not just doomsdayers that scoop up gold. Jewelry accounts for over half of annual gold consumption. And thanks to its electrical conductivity properties, the metal has become increasingly important for electronics manufacturing and industrial applications.

And while prices are typically more sensitive to demand than supply, I would be remiss without mentioning the latter. By definition, existing mines are a depleting resource. Many dependable fields from Nevada to South Africa are nearing the end of their projected lifespans. And they aren’t easily replaced.

We’ve already plucked the low-hanging fruit. Large-scale deposits (30+ million ounces) that can really move the needle have become increasingly scarce. There were at least ten such discoveries per decade in the 1970s, 1980s, and 1990s, but none in the past 20 years.

In other words, global reserves are dwindling. They have decreased in each of the past seven years.

It’s not for a lack of searching. According to McKinsey, capital expenditures among gold miners rose 10-fold between 2000 and 2012. But then gold prices went into a prolonged tailspin, forcing miners to cut costs and re-evaluate their strategies.

As we’ve discussed, capital priorities have since shifted. Rising costs for labor, power, and other needs is also an impediment, especially when working in tricky terrain at extreme depths a mile or two below the surface. Many discoveries just aren’t economically viable.

Find a promising new source today, and the first ounce might not come out of the ground until 2032. And again, there hasn’t been much prospecting in recent years thanks to the downturn.

Take all these numbers with a grain of salt. Forecasts can change quickly. And this is a birds-eye overview.

But the big picture is this…

Gold is being extracted faster than new discoveries can be made, pushing global reserves downward. Senior miners are struggling just to maintain current production rates (let alone increase them). At the same time, demand from jittery investors has reached feverish levels. Finally, producers have become more disciplined with their spending and are balancing growth pursuits with capital returns.

It’s working. After lagging the performance of gold bullion for years, an index of senior gold mining stocks has soared 57% over the past 12 months, more than doubling the 24% uptick in gold prices.

That’s one of the reasons I prefer equities over futures contracts or physical gold. You’re investing in a business, not merely speculating on higher prices. Storing and/or insuring gold also costs money. And it certainly doesn’t pay you a regular dividend every quarter.

More importantly, mining companies can deliver positive cash flow even in flat or declining price environments. And if prices do climb as I suspect, natural operating leverage usually ensures that their earnings growth outpaces any increase in the underlying metal.

There’s much more to say on this topic. But many of the names I mentioned above are names you should be researching right now as potential portfolio additions.

My preferred method is investing in what are known as the metals streamers. Practitioners of this unique business model take possession of gold and silver without ever getting their hands dirty. A decade ago, I named one of these unique companies as “My Favorite Stock of 2010”, and it went on to deliver an extraordinary gain of 159% that year. 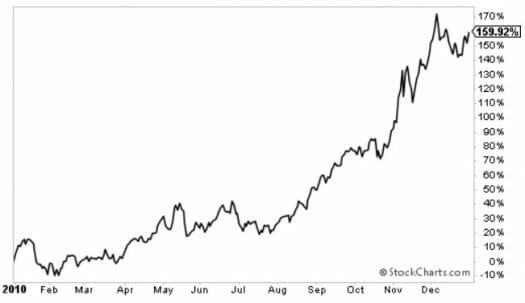 I’m not saying it will duplicate that performance in 2020, but conditions are certainly right for another big year.

If you want to know more about investing opportunities in precious metals, then here’s something you might want to check out…

To most people, this picture just looks like any old tree-covered hill. But there’s something currently hidden from view that could make early investors a fortune… A massive mineral deposit. Possibly, one of the largest ever discovered. Geologists and precious metals experts estimate is worth $100 billion or more.

So why hasn’t it been dug up? Well, for one thing, it’s located just below the Arctic Circle. That means much of the ground lies frozen almost year-round… That is, up until just recently.

Now, mining and drilling companies have been making a mad dash to extract natural resources in places like this as the Arctic begins to thaw out… To learn how you can get in on the profit bonanza, check out our brand-new special report.