What To Do About The ‘Black-Eyes’ In Your Portfolio

We’ve spent a lot of time talking about coronavirus and its impact on the market here lately. But as many of you know, there is another ground-shifting development that’s impacted the market – it just isn’t getting talked about as much.

I’m talking, of course, about the collapse in oil prices.

In 2016, Saudi Arabia and Russia created the OPEC+ alliance, which included 11 OPEC members and 10 non-OPEC nations. (The United States is not part of OPEC or OPEC+.)

The group controls more than half of the world’s oil production. For years, OPEC+ had an agreement to curb oil production in an attempt to reduce the supply glut and prop up oil prices. But that alliance fell apart earlier this month when Russia wouldn’t agree to further production cuts.

To retaliate, Saudi Arabia decided to abandon output restraints and flood the market with cheap oil. This wreaked havoc on the oil market. This means a global oil market that was already oversupplied will soon be flooded with even more oil. On March 9, the price of oil fell over 20%, making it the second-worst steepest oil crash on record (behind January 17, 1991). The slide has continued further (in fact, West Texas Intermediate touched $20 per barrel recently.) 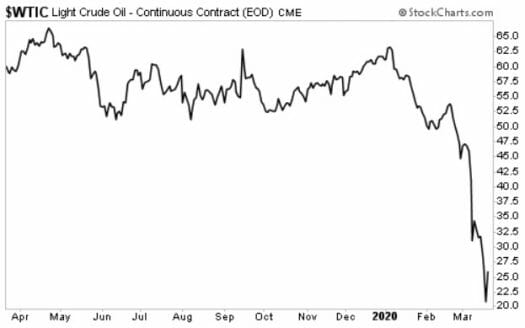 Many oil producers were hit even harder.

One Of The Biggest Black Eyes

Let’s talk for a moment about one of the hardest-hit: Occidental Petroleum (NYSE: OXY).

Occidental is a world-class producer. Like many others, I originally liked the company. Shares were depressed after its purchase of Anadarko, which bloated the debt on its balance sheet. But the company owns some of the best oil wells in the country, mainly in the Permian Basin.

A purchase of OXY two months ago was a bet that it would be able to swallow its large acquisition and manage the debt load. While investors waited for the market to realize that Occidental was deeply undervalued, they would collect a hefty 6%-plus dividend yield. After all, the company raised its dividend 17 years straight.

Occidental is among the top companies in terms of operating costs. Its cost to produce a barrel of oil is right around the $30 mark. Now, oil prices could easily rip higher to $30. With everything else that’s going on right now (depressed demand), I don’t see that happening. But it’s possible. Still, just covering output costs doesn’t leave any money to cover debt payments and cash to dish out to shareholders.

To conserve cash, Occidental slashed its dividend by 86%, dropping its quarterly dividend to $0.11 from the previous level of $0.79.

I’m not going to sugar coat it… if you bought OXY, then this sucks. But it’s best to cut your losses and move on. There’s no sense waiting for this to turnaround and get back to your entry price because it might never do that.

This isn’t just about OXY, though. This is about many of the stocks we all own right now. The big question has become… do I continue holding onto the company and hope it turns things around, or do I cut my losses? Many folks at this point will simply hold on because “how much lower can it go?”

In some cases, they may be right. But trust me, it can go lower and stay lower for a lot longer than you can imagine.

I know this hurts. But it’s my job to be honest with you. Frankly, in the case of OXY, you’re better off cutting your losses and deploying that money elsewhere. I can’t say that about other stocks you may own right now. In fact, some of them may be screaming buys at these levels.

On the bright side, my colleague Dr. Stephen Leeb recently showed me his latest research, which has to do with an untapped resource find deep in the Arctic. And honestly, it’s one of the most interesting things I’ve read in quite a while…

In short, Dr. Leeb and his team are reporting that this nondescript little patch of land could be home to one of the most profitable precious metals deposits ever discovered.

Read all about it – and learn how to profit – right here.