How To Avoid Disaster And Live To Fight Another Day…

On February 19 markets made all-time highs. Today, we are suffering from the quickest bear market in history as the S&P 500 is down roughly 37% and the Dow Jones Industrial Average has shed more than 11,000 points.

Boy, how the world has changed in one month…

It’s no fun, and gut-wrenching to see our investments go down. And while we’ve seen our fair share of losses over at Maximum Profit, there’s one key element of our strategy that has saved our portfolio. It’s one you’ve no doubt heard me talk about numerous times.

We’ve also cushioned the blow by cutting stocks from our portfolio as our sell signals have been triggered and moved to cash. And right now, it is providing a good lesson of why we want to cut losers short…

How We Avoided Disaster

Take our recent addition Penn National Gaming (Nasdaq: PENN) as a prime example. We added the stock in late February as its momentum surged. We picked up shares for just under $38 per share.

But as COVID-19 took over, shares of PENN fell… and kept falling. As I write this, shares are trading for $4. That’s not a typo.

We closed out of the stock on February 26 (after it closed below our trailing stop loss on February 25). We lost roughly 21% on the trade in only a week. But that 21% loss looks mighty good today… 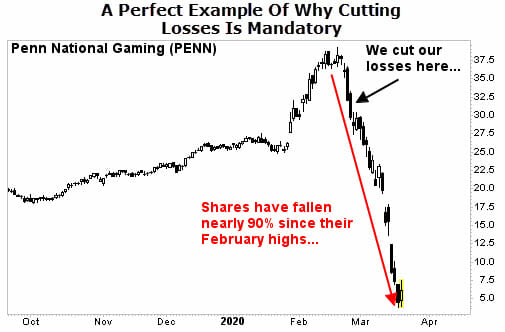 Investors who decided to hold onto the stock aren’t just taking a bath, they’re drowning. As you can see shares are now down around 90% from when we originally added the stock. Remember, a 90% loss requires a 900% gain just to get back to even.

The point is that yes, we suffered losses, but for the most part we kept them small. We can — and will — recover from our small losses, but recovering from a massive loss is extremely difficult.

This isn’t an isolated example. As this market has tumbled we’ve softened the blow for our entire portfolio by following our stop losses and moving to cash. In the chart below, you can see how our cash position has grown as this bear market has unfolded. 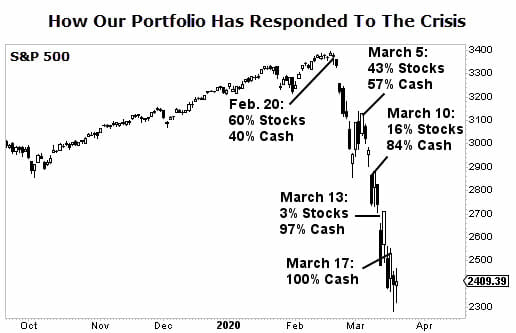 How We’ll Live To Fight Another Day

What we are witnessing right now is historic. Unfortunately, many folks have lost enormous amounts of money in the market. Some are also losing their jobs and getting sick. And while the days seem dark right now, we can find some positives in the world.

First, as with every historic selloff, it creates opportunity. And right now, as we sit in cash over at Maximum Profit, we will have plenty of dry powder on hand to deploy to take advantage of those opportunities. In fact, I recently added one stock back to the portfolio.

Second, the Federal Reserve has slashed interest rates to near zero, which means we will once again see record-low mortgage and auto loan rates. Banks have seen such a historic surge in folks wanting to refinance that they’ve upped their rates in an attempt to slow things down to a more manageable level.

General Motors (NYSE: GM) announced that they would offer 0% financing for 72 months four months of deferred payments for those with top credit scores on the purchase of new vehicles. As we come out of the other side of this (which we will), we will likely see many more similar deals as companies kickstart their businesses. Throw in cheap gasoline for an extended time, and I think there’s plenty to be optimistic about.

As much as I hate closing out stocks for a loss, it’s the prudent thing to do. I’ve said repeatedly over the years that the key to successful investing is cutting our losses short. It’s too easy to hold on just one more day to see if the stock climbs. And when it doesn’t, we kick the proverbial “Sell” can down the road. Pretty soon, years have passed and we’re sitting on a massive loser in the portfolio that will likely never recover.

Losers happen to everyone. Nobody is immune to it. I’ve talked plenty about my own personal losses in these very pages (you can read them here and here). I talk about my losses because what I learned from them has been key to my success later down the road. Plus, I don’t want you to make the same mistakes I have.

Yes, it’s tough to hit that “Sell” button in the brokerage account booking a loss. But just think back to the PENN example above… would you rather lose 21%, which only requires a 27% gain to get back to even, or be sitting on a massive 90% loss, which requires heroic efforts to recoup your money?

The point is, while making money is fun… learning to keep it is even harder.

Editor’s Note: One way to lower your risk and increase your chances of winning are with a bonus dividend” strategy. This proven strategy allows you to earn income from stocks right off the bat instead of waiting for a dividend. It’s the closest thing to a win-win situation that you’ll get in the financial markets.

You’ll not only pocket the “bonus” dividend you receive from your trade — you’ll also have the opportunity to repeat similar trades again and again. (And don’t forget about regular dividends, of course.) If you’d like to learn more, we’ve updated a special report that tells you everything you need to know.