This Global Leader Is Now On Sale

Most of us make a list of resolutions at the beginning of a new year. Topping that list is usually improving our health.

We want to lose weight, eat healthier, and build muscle. Gym memberships typically skyrocket this time of year, diet books are sold out, and health-monitoring devices fly off the shelves. It’s easy to see why losing weight and eating healthier are at the top of many people’s lists… obesity is a common and serious problem in the United States.

According to the Centers for Disease Control and Prevention (CDC), obesity affects roughly 40% of adults in America. The estimated annual medical cost of obesity in the United States is more than $147 billion. Obese individuals tend to have medical costs that are nearly $1,500 more per year than those of normal weight.

But here’s the thing… this public health crisis is going global.

The World Health Organization shows that obesity around the world has tripled since 1975. Now, more than 650 million adults worldwide live with obesity — roughly 13% of the global adult population.

There’s just no way to sugar-coat it: The health problems associated with obesity are life-threatening. Obesity-related conditions include heart disease, hypertension, sleep apnea, stroke, and certain types of cancer.

Yet, one of the most common — and debilitating — results of obesity is diabetes.

Type 1 diabetes is an autoimmune disorder that usually develops during childhood. Those with Type 1 diabetes must rely on frequent insulin injections in order to regulate and maintain blood glucose levels.

Type 2 diabetes is a metabolic disorder — usually due to poor health and obesity – in which the body is unable to produce sufficient amounts of insulin or becomes insulin resistant. Depending on the severity of Type 2 diabetes, individuals may require diet and nutrition management, exercise, oral medications or insulin injections to regulate blood glucose levels.

Diabetes is a growing epidemic. Every 21 seconds someone in the United States is diagnosed with the malady. It affects 30 million children and adults. Some 84 million Americans have higher-than-normal blood sugar levels, a condition known as pre-diabetes, and are at risk for developing type 2 diabetes.

The health-care costs are huge, standing at roughly $327 billion in the United States alone. Here’s a graphic from the American Diabetes Association: 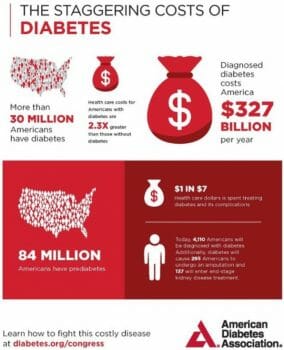 Diabetes is a life-threatening disease. Every seven seconds one person dies from diabetes, according to the International Diabetes Foundation. It’s the primary cause of kidney failure and can also cause blindness, stroke, heart attack, amputations… the list goes on.

What’s more, this isn’t only a problem in the United States. In 2017, approximately 425 million adults worldwide were living with diabetes. That number is expected to increase to 629 million by 2045.

A Global Leader In Diabetes Care

Novo Nordisk (NYSE: NVO) is the global leader in insulin production, with a nearly 50% share of the overall market.

There are two main types of synthetic insulin: human insulin and modern insulin.

Novo Nordisk has a Patient Assistance Program (PAP) that provides free insulin for qualifying patients. It’s a pretty neat program. You can read more about it directly from Novo Nordisk, here.

About 84% of Novo Nordisk’s sales come from its diabetes care and obesity segment. The remainder of sales comes from biopharmaceuticals business line, which produces drugs that treat hemophilia and growth hormone disorders.

For 2019, the company pulled in more than $17 billion in sales and about $5.8 billion in profit. The company also generates a significant amount of free cash flow — about $5 billion in 2019.

Management uses that free cash flow to return cash to shareholders. In 2019, it dished out more than $5 billion to shareholders in the form of dividends and share repurchases. 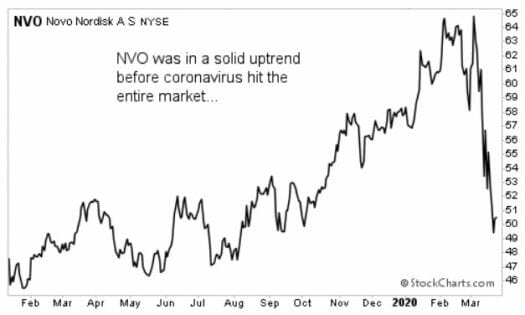 The trend is unmistakable. With diabetes growing at an alarming rate, it comes as no surprise that the global drug market for diabetes has also seen rapid growth. As the market leader in insulin, Novo Nordisk will benefit from treating the global rise in obesity.

NVO was a “Buy” before the recent downturn, and it’s an even better value today. Put this one on your watchlist for when the dust settles in the broader market.

In the meantime, another corner of the market I’m watching closely is gold…

While prices of the yellow metal have soared over the past few months, they’ve got much more to run. As coronavirus panic grips investors, our investment experts have pinpointed a play that could hand you huge gains… but only if you act now. Click here for details.