Stocks Are Surging. Will It Last?

When I was a kid, I had one of those rubber band guns. Remember those?

I was never much of a sharpshooter. But even I understood that the further I stretched the band, the faster it would snap back when let go.

We’re seeing the same principle in effect with the market right now.

As we all know, stocks pulled back – almost to the breaking point. We had a 38% drop in just 28 trading days, the fastest decline of that magnitude on record. By comparison, it took a more leisurely 250 trading days for the S&P to decline 30% in the 2008/2009 recession.

So in that sense, the bounce we’ve seen the past two days (and so far today) wasn’t entirely unexpected.

Investors have been waiting on a bold stimulus package from Congress. And after a few days of heated debate, party leaders on both sides have reconciled their differences in the Senate. The massive $2 trillion bill will put cash directly in the hands of American families. It also contains extended unemployment benefits, financial assistance for small businesses struggling to pay rent, and subsidized loans to stricken industries.

Big problems require equally big solutions. And while the package may not be perfect, it was necessary. That’s why it passed through the Senate last night (finally) with a unanimous vote. Next up, the House.

So Far So Good…

The market cheered, sending the Dow up more than 2,100 points on Tuesday. It was the largest point increase on record and the sharpest one-day percentage surge (11%) in 87 years. The question was, could it be sustained? We’ve seen several powerful rallies during this selloff, but the market has always rolled over the following day.

Yet at the close on Wednesday, we finished with a 500-plus point gain. That’s the first set of back-to-back positive days since this whole mess started. 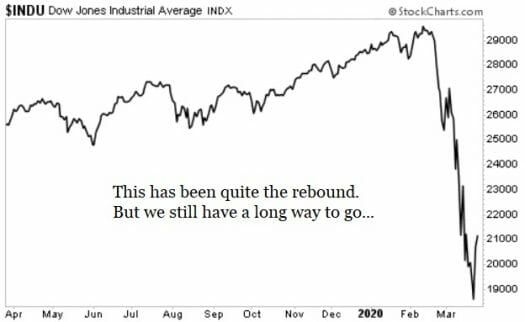 This is a big step in the right direction. Most of our High-Yield Investing portfolio holdings took full advantage. As I recently told subscribers, I don’t know when we’ll officially bottom, but I am willing to dip my toe in the water, thanks to our relatively large cash position. As a result, our new modest positions are up big. That’s good, but we still have some ground to gain with some of our existing positions.

Our hard-hit real estate holdings have seen some relief. Entertainment Properties Trust (NYSE: EPR) rebounded 25% Tuesday and another 25% Wednesday. That’s simply incredible. Still, if you’ve been waiting for a good entry point, the window of opportunity hasn’t yet slammed shut. Even after this rally, EPR has only bounced into the mid-$20s – this was a $60 stock just a few weeks ago. 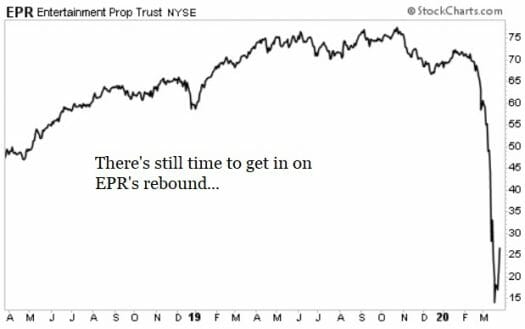 And the crazy thing is, the dividend yield on the compressed shares is still north of 15%. Now, is that dividend sustainable? It depends in large part on how long this whole situation is going to last. But I should add the property owner has 100% occupancy, $1.25 billion in cash, and no debt maturities until 2023.

We’re not out of the woods yet. A couple days does not a trend make.

We just got the numbers for unemployment claims. You ready for this? 3.28 million. Far and away a record. There will be more crazy number like this in the weeks to come. And I still agree with most economic assessments that the Covid-19 impact will be devastating, but likely short-lived. Morgan Stanley warns that GDP could tumble nearly 30% between April and June, but then show positive growth as soon as the third quarter.

But it’s still encouraging to see signs of life out there. In any case, I want to leave you with this…

I watched many frightened investors completely miss out on the last major market recovery because they were paralyzed and waited too long to act. If you’ve got idle cash to invest, at least have a few quality ideas in mind. I’ve done my best to provide with many over the past week and will continue to do so as I see fit. Because as we’re seeing right now, when market sentiment turns, it can turn fast.

To learn more about the opportunities we’re finding over at High-Yield Investing, go here now.