The Once-In-A-Generation Opportunity In Front Of Us Now

Remember the Y2K panic? Regular people around the world suddenly turned into doomsday preppers, stockpiling water, food, and other essentials in advance of a societal collapse on the first day of the new millennium.

My grandmother was one of them, buying into the frenzy hook, line, and sinker. She felt a little silly that New Year’s day when nothing happened.

I hope this finds you and your family well. Here in Louisiana, the governor ordered the closure of all non-essential businesses last week, after having already shut down schools, restaurants, and movie theaters. Many of you are in the same boat as state and local officials take necessary precautions to limit the spread of the infectious Covid-19 disease.

I’ve been wanting to spend more time at home with the kids – but not like this.

There’s a line in the movie Day After Tomorrow, “things seem to be getting worse by the minute”. That’s how I’ve felt since the virus first invaded our shores a few weeks ago.

It already seems like forever ago when baseball spring training games were being played. You could still visit the gym or your favorite restaurant. And transatlantic flights were still carrying passengers between the U.S. and Europe.

It was a different world – yet, that was only a month ago.

If You’re Bold Enough, Value Is All Around

If you recall, I recently had a few nice things to say about Disney (NYSE: DIS). I had just returned from a trip with the family (our timing couldn’t have been better) and casually remarked that the stock would be an interesting portfolio candidate on a pullback below $110. Well, it breached that level just days later.

And over the next two weeks, it would sink as low as $80. 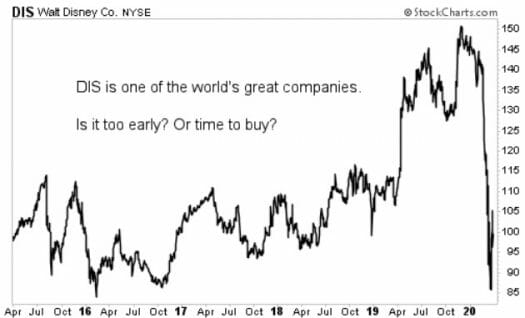 Without knowing anything else, that steep decline in such a bellwether blue-chip should give you a pretty good idea of what transpired in the market. And sadly, Mickey’s shareholders fared better than most.

According to my screening data, about 8,100 U.S. listed stocks surrendered 50% (or more) of their market value from March 1 through March 23. Some of those massive corrections were deserved – many were not.

That’s not to say there aren’t genuine financial concerns out there. Damage estimates ranging into the hundreds of millions (or billions) of dollars are common among multinational businesses. We can’t even quantify the financial hit in some sectors. Casinos and movie exhibitors, for example, are completely shuttered.

Outside of pharmacies, grocery stores, and a handful of other companies – Clorox (NYSE: CLX) comes to mind – everyone is hurting. You might have seen some of the ugly GDP forecasts. JP Morgan Chase believes economic output could fall 14% next quarter. Bank of America sees a sharper 24% decline. And Morgan Stanley is projecting a devastating 30% drop.

Keep in mind, these figures are annualized. But few expect such carnage to continue much past June. We could see an equally large rebound in the third quarter once commerce resumes. For all of 2020, Moody’s is forecasting the U.S. economy to show a decline of 1.9% — that’s bad, but not apocalyptic.

Here’s The Bright Side

As you probably know, Congress just passed a sweeping $2 trillion stimulus package involving direct cash payments to most taxpayers, along with small business grants and low-cost loans to afflicted industries. This would provide much-needed liquidity and give the economy a jolt – a salve for the market’s wounds.

Already, market sentiment has perked up noticeably. We capped off a third straight day of powerful gains at the close of trading on Thursday last week. And the market action on Monday was positive, too.

I bring all this up because I want you to know that I’m not panicking. And you shouldn’t, either. In fact, I’m incrementally adding to several positions that I believe have been oversold. Fortunately, I’ve kept more plenty of liquid cash available for just such an emergency.

When referring to current prices, investment-banking firm Jefferies said today’s investors were practically “stealing.” So when the time is right, get ready for some thievery.

That doesn’t necessarily mean the worst is over. But we’re looking at once-in-a-generation valuations in some corners of the market.

So get ready to act. We’ll get through this crisis together as a nation. And a few of us will look back on this and be glad we kept our heads and got in at these levels.

P.S. There is one health services company we’ve been watching for a while that is about to take off. The good news is there is still time to buy it before it makes an announcement soon that could revolutionize the entire health sector.

This one biotech has developed a new cure for chronic pain and its stock could skyrocket by as much as 4,450% or more.

You’ve probably never heard of the company. Wall Street analysts are ignoring it. But now’s the time to invest. Learn more here.