This High-Yielder Is Rebounding Nicely…

As one of the world’s largest drugmakers, it’s no surprise that a drug giant like Pfizer (NYSE: PFE) has thrown its hat into the Covid-19 ring. The company has just teamed up with BioNTech to develop a potential vaccine.

Both partners will bring something to the table.

Founded in 2008, BioNTech is a German biotech firm with a promising pipeline of therapies to treat cancer and infectious diseases. The company has a number of candidates in the latter stages of clinical trials. One of those, a Covid-19 vaccine, will be administered to human patients in the very near future – likely by the end of this month.

While BioNTech has some talented researchers, it’s a smaller company lacking adequate financial resources to commercialize a vaccine and roll it out on a global scale. The company has $580 million in cash – that’s less than what Pfizer makes in an average week.

So a collaboration makes sense. For its work thus far, BioNTech will receive an upfront payment of $185 million (and potentially up to $748 million if certain targets are hit). Pfizer will help with regulatory legwork, and when the time comes, flex its manufacturing and distribution muscles. The two partners will share development expenses on a 50/50 basis. The goal is to have hundreds of millions of doses ready by 2021.

The Case For Pfizer

Of course, Pfizer has plenty on its plate in the meantime. The company traces its origins back over 150 years and has cultivated one of the industry’s largest (and most profitable) portfolios. It’s introduced heavy hitters such as Eliquis and Lipitor, which are used to treat blood clots and high cholesterol. There’s also the pain reliever Lyrica. Combined, these three blockbuster drugs generate more than $10 billion in annual revenue.

The biggest money-maker is Prevnar (a vaccine to prevent pneumonia and meningitis). This hauled in $5.8 billion worldwide last year.

By themselves, Eliquis, Lipitor, and pain-reliever Lyrica haul in more than $10 billion in annual sales. And the budding biopharma business remains a powerful emerging markets growth driver, turning in a near double-digit uptick last quarter.

Before the Covid-19 outbreak, the company released 2020 forecasts showing an expected mid-range profit of $2.87 per share (assuming no further buybacks) on revenue of about $50 billion. Where that ends up in the aftermath of all this is uncertain. Having said that, I’m confident in the long-term performance outlook.

Meanwhile, the dividend was just raised again to $0.38 ($1.52 annually). Even after recovering nicely from the market’s broader coronavirus selloff, that still puts the yield north of 4%. And it remains double that of its peer group and the overall market. 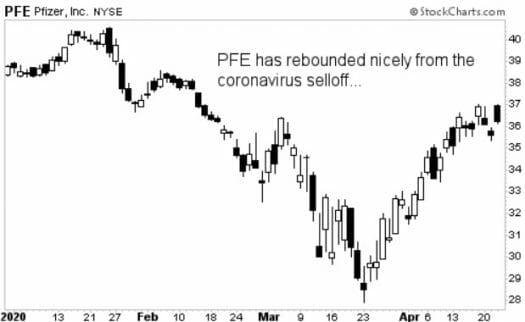 To keep those payouts moving forward, Pfizer has been plowing about $8 billion back into R&D annually. Those investments yielded seven key drug approvals last year. This resulted in new revenue sources to offset the $1.7 billion in lost sales from patent expirations.

Pfizer currently has 100 drug compounds in its pipeline. At this time, 37 of these have advanced to Phase 3 clinical trials or are in registration. Many of these will strengthen the firm’s core oncology and infectious disease franchises. But Pfizer is also developing novel therapies for sickle cell, neuromuscular disorders, and other rare diseases. For example, it’s working on a vaccine to help eradicate respiratory syncytial virus (RSV). This is a chronic lung disease that leads to 120,000 childhood deaths each year.

While the science behind these breakthroughs is beyond most of us, Pfizer’s track record speaks for itself. And while I wouldn’t invest in PFE on the basis of it developing a coronavirus vaccine by itself, the company should has several tailwinds in its favor over the next few years.

First, a company-wide overhaul will cut loose some of the dead weight and free up capital that can be deployed into manufacturing and R&D.

Second, the wave of patent expirations has crested and begun to subside. Aside from Lyrica, the company will enjoy marketing exclusivity free of competition for most of its drugs until the latter half of this decade. There are also three dozen promising drug candidates approaching the FDA’s finish line. Each one of them could be a potential growth catalyst.

Bottom line, PFE has held its ground. In fact, shares have gained nicely since bottoming amid the broader market selloff. This cash-generator remains a “Buy” for long-term investors.

P.S. COVID-19 is an emergency. Nobody denies that. But it’s also a big opportunity…

You see, more pros are turning to a “crash-proof” trading move we’ve discovered in a hidden corner of the market. And it could line your pockets with the biggest gains of your life — while the rest of the market is left wondering what’s next.

That’s why I’m hosting a special emergency briefing next Tuesday. And I want you to have the opportunity to join me, for free.

You WON’T find information on how to make trades like this anywhere else.

So to secure your spot, go to this page and sign up.