This Turnaround Play Is Risky, But The Upside Is Huge…

On May 11, we got some juicy gossip – full of enough drama to light up the silver screen itself. It just so happens the news had to do with movies, specifically movie theater operator AMC Entertainment Holdings (NYSE: AMC).

I’ve been closely monitoring AMC for months. Until recently, the struggling movie exhibitor looked like an aggressive turnaround candidate for aggressive high-yield investors.

That was before Covid-19. Now, of course, the theaters are closed. Gone, too, is the dividend. That was scrapped to preserve cash in this brutal environment.

Here’s Where Our Story Begins

At the time, there were rumors AMC was in talks with bankruptcy lawyers. But the company managed to tap the capital markets for a $500 million cash infusion, which management believed was adequate to pay all bills and keep the lights on until at least Thanksgiving — even if theaters remain closed and no revenues come in.

Most analysts (myself included) believe multiplexes will re-open long before then, most likely by mid-summer. It may be at half-capacity to observe social distancing, but at least that’s a start. 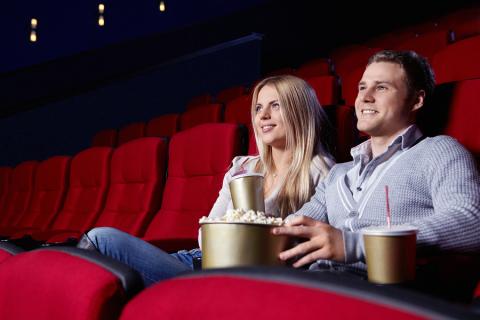 What will going to the movies look like post-lockdown?

Even before the lockdown, AMC was sagging under the weight of a heavy $4.8 billion debt burden following the purchase of several rival theater chains (including Carmike).

But from an operating perspective, the company was making great strides.

Before the pandemic, AMC’s 1,000 theaters welcomed 359 million annual visitors, about 50 million more than the next closest rival. It had an entrenched No. 1 position in most of the nation’s 25 largest metro markets, with a growing footprint overseas. For the record, international box office revenues are growing at twice the pace of the U.S. — setting record highs in 13 of the past 14 years.

In terms of attendance per screen, AMC has outrun its rivals for eight consecutive quarters. And with 20+ million members in its loyalty program, the company was on track to haul in $5 billion in revenue this year.

Until the lockdown is lifted, though, none of that matters. With liquidity concerns mounting, the stock sank to just $2 recently – less than the cost of a package of Twizzlers at the concession stand. We’re talking a market cap below $300 million for a company that hauled in over $900 million in cash flow last year.

In other words, the entire business was trading for less than 1 times cash flow. For an opportunistic buyer, it could be a great time to pounce.

That brings us to the sharp pop in AMC stock. From a close of $4.10 on Friday, May 8, the shares opened at $6.40 on Monday, May 11. Some of that advance was given back, but the stock is still holding on to a nice 32% return. It’s also worth noting that large blocks of call options were reportedly bought right at the closing bell on Friday the 8th. 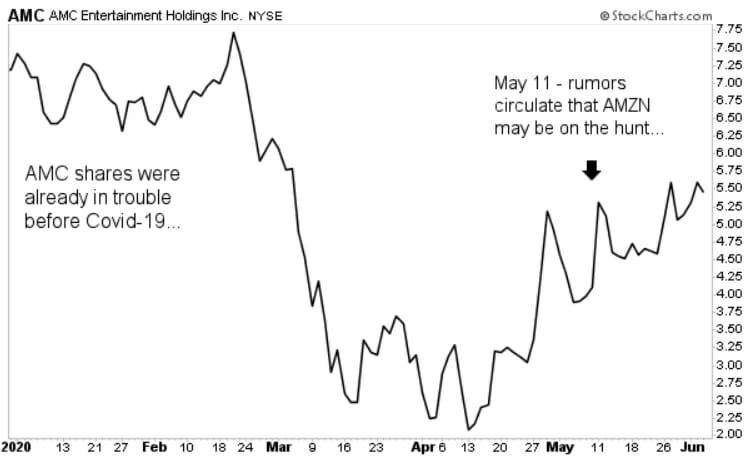 Anonymous sources from a British newspaper leaked word that AMC has been quietly talking with a mystery suitor. The potential buyer is none other than Amazon (Nasdaq: AMZN).

It’s not too much of a stretch to see the motivation behind such a merger. Amazon has branched far beyond its e-commerce roots into video streaming and content creation. A brick-and-mortar platform could open up countless new possibilities.

The same could be said of Apple (Nasdaq: AAPL).

It’s too early to tell whether these discussions are legitimate, still active, or otherwise. And if they are, whether they will lead anywhere.

But there is blood in the water and the sharks are circling. Who knows? We may ultimately see Disney (NYSE: DIS) throw its hat in the ring. AMC has been feuding with Hollywood movie studios over the theatrical window (during which theaters have exclusive distribution rights before online streaming and DVD rentals). A merger could be transformative.

I never buy strictly on rumor or speculation. And before I go any further, I should note that AMC just recently issued the dreaded “going concern” notice in its most recent 8-K filing with the Securities and Exchange Commission.

But then we sort of already knew that. Even if the company is able to restructure its heavy debt load, if the theaters don’t open, this business goes belly up or gets bought out. Period.

But even before this, I viewed AMC as an undervalued turnaround candidate. (Full disclosure, I bought the stock for my personal account back in March for $2.87.) It’s worth noting that management has willingly accepted salary cuts in lieu of stock option grants that won’t vest until the stock reaches at least $12 – more than double today’s price.

Aside from the leveraged balance sheet, AMC is an intriguing takeover target that meets most of my checklist requirements. Either way, I believe the stock could rebound sharply once revenue starts to flow again.

Fair warning, this is a risky stock. If a deal doesn’t happen quickly, the gains could unravel. Beyond that, the $500 million note only bought the company some time; it must still aggressively address the debt burden once theaters reopen.

But the rewards could be equally great. We’ll know a lot more about where AMC stands by the end of the summer.

But if you’re unfamiliar with how options work, then consider turning to my colleague Amber Hestla. She’s the Chief Investment Strategist of our premium trading service, Profit Amplifier. And she’s been helping traders navigate the world of options to turn tiny price moves into massive gains — while also limiting risk.

Right now, Amber’s team is making a bold promise: Over the next 12 months, if the gains from all of Amber’s winning trades don’t add up to at least 1,000%… Just let them know, and they’ll give you a second year of her service absolutely free. Go here to learn all the details.