2 Big News Items (Plus: A Word Of Caution)

Two big news items sent the market higher yesterday. I want to touch on them, since they seem to counteract some of the negative sentiment that’s crept up in the market lately.

Infrastructure For Real This Time?

The first reason the market surged yesterday was because of optimism surrounding newly-announced infrastructure spending proposals out of the White House. Details are being worked out as we speak. But the word is that President Trump is urging the Department of Transportation to develop a sweeping infrastructure game plan.

The current round of funding is set to expire in September. Replacing it could be a much broader $1 trillion agenda aimed at everything from roads and bridges to rural broadband internet connectivity.

The President has been banging the infrastructure drum since before he took office. With the economy still fragile and an election just months away, he appears to be redoubling his efforts.

Rebuilding the nation’s dated infrastructure is one of the few areas of bipartisan agreement. The American Society of Civil Engineers issues a detailed report card every four years on the state of the nation’s infrastructure. In the latest report (2017), the ASCE gave an overall grade of D+.

Of course, Congress hasn’t been able to agree on what to fund and how to fund it… Nevertheless, the prospect of a bold infrastructure package appears to be gaining traction.

As you might expect, investors are jumping into materials stocks, as well as large government contractors. Tutor Perini (NYSE: TPC), an engineering and construction outfit (and former holding of mine) specializing in highways, bridges, and tunnels is enjoying one of its best days in years, advancing 11% as I write this.

There is also good news on the retail front. May sales figures were just released, and they rebounded 17.7% from the prior month. That’s double the 8% increase analysts were expecting. Granted, the bar was low, but spending still showed the sharpest increase ever recorded, topping the prior record set in October 2001. 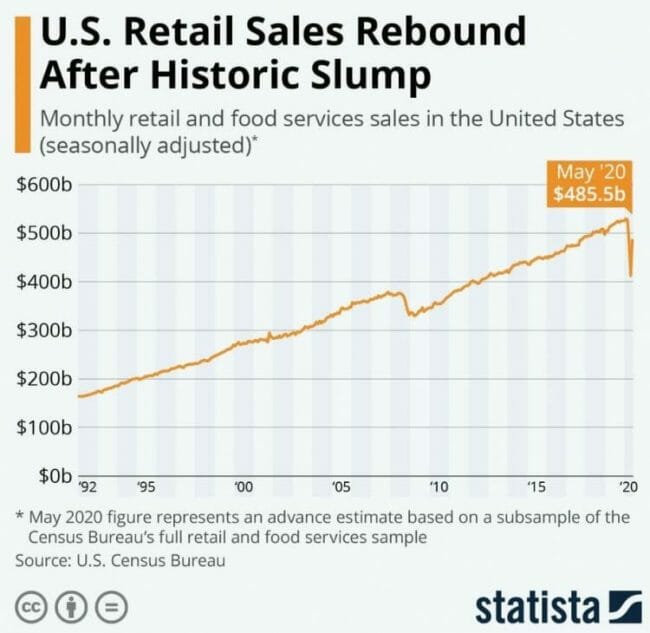 Consumers spent heavily on everything from apparel to books to new cars and trucks. And investors are cheering, sending the Dow up nearly 800 points in early trading this morning.

Only time will tell if this rally continues, or we revisit some of the pessimism and selling that crept in last week. Either way, I intend to lock in some of my recent gains. But as I’ve said before, I’m still looking to selectively add high-yielding names that are still down in this market.

When the market was in chaos during the Covid-19 lockdown, I put a large amount of cash to work. Taking advantage of the turbulence, we welcomed 12 new holdings to the High-Yield Investing portfolio between March and May.

All 12 of those are currently in the green…

While I can’t reveal the names of all the winners out of fairness to my subscribers, I gave a rundown of the moves we made in this article. I also included links to pieces I wrote in the midst of this crisis. In short, I told readers to be bold and look for quality names that were unfairly punished.

I hope you took that advice. We bought in the early stages of the national lockdown when fear was rampant and the outlook was bleak. But that’s what it takes sometimes…

I also doubled-down and added to positions in existing holdings – all of which have been streaking higher.

But I still think this rally has gotten a little ahead of itself. So here’s my advice…

If you’ve made some big, quick gains in this rally, then congratulations are in order. But consider entering some stop-loss orders on your holdings.

In fact, we recently went ahead and pocketed gains on two of our bottom-fishing gains over at High-Yield Investing. And just last night, I told my readers to enter protective stop-loss orders on two more holdings.

In the meantime, to see what else we’re up to over at High-Yield Investing, go here now.