How To Ride The Rapids Of The Market

I’m not entirely sure how I ended up captaining a Sweep Boat.

But there I was, going down the river each day, at 15 years old.

(I wasn’t really by myself, though. I did get my younger brother, who was 13 years old, to come along with me.)

For those who don’t know, a “sweep boat” goes down ahead of the other rafts to set up camp. It’s a 22-foot raft — with 36″ diameter tubes. And for the next week, I was in charge of taking this massive boat weighing more than 2,000 pounds, loaded with camp and client gear, down the river by myself…

The journey: a 100-mile stretch of river that cuts through the nearly 2.4 million-acre area called the Frank Church Wilderness in Idaho.

One thing I’d like to point out is that these boats aren’t like normal rafts. Instead of “rowing” the boat, you “drive” it. The sweep boat driver stands in the middle of the boat with two large “sweep” arms that run out the front and back. It has no motor to propel you or help you avoid rocks. You are simply at the mercy of the river and its continuous flow. You must know your lines and/or read the river to successfully navigate the sweep down the 100-mile whitewater stretch. 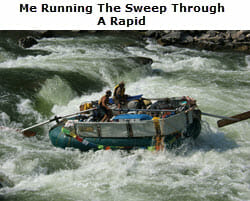 Between its size, weight, and the fact that you’re not maneuvering the boat with oars, but steering it with sweeps out the front and back to skirt obstacles, it’s a tall task for anyone. It’s arguably the most difficult boat to run on the river.

If you get the boat stuck, it’ll likely take an hour or more to get it unstuck. Trust me, I know…

It was a hot August day, and the stretch of river that I was navigating was a combination of low water, lots of rocks, and a couple of larger rapids.

I had made quick work of the first few rapids and tough spots in the river. But I was coming up to a notorious shallow area, and up ahead I saw another raft — much smaller than mine — stuck on some rocks. I figured, if that person was stuck in a tiny cataraft there was no way my tank was going to make it through.

I made quick work of it, picked good lines, and wiggled my way through without getting stuck. I was feeling pretty good about myself… pretty cocky and arrogant.

But one thing about the sweep boat (similar to the stock market) is that as soon as you think you have it conquered; it will humble you.

I was approaching another difficult rapid. But seeing as how I had just made it through the tough stretch right above it, I didn’t give the rapid the respect it deserved.

The rapid is a sharp right turn, but you can’t cheat the turn because of a gravel bar on the right that encroaches and pushes you towards a large rock in the middle of the river. You have to squeeze right of that large rock and left of the gravel bar. It’s just wide enough for a sweep to fit through.

As I nonchalantly approached the rapid, I wasn’t staying far enough right near the gravel bar. As soon as I realized my mistake, I worked as hard as I could to get the sweep boat right. But as you can imagine, a 15-year old kid wasn’t strong enough to force that boat right. And before I knew it, I was perched on that rock in the middle of the river.

It took me three hours (with help from other fellow raft guides) to get that boat unstuck. It was a humbling experience, to say the least.

But here’s the thing about driving sweep boats. Once you get stuck on a rock or make any sort of mistake, you quickly learn from it and make sure it doesn’t happen again.

How This Helped Me Become A Better Investor

For me, investing is a very similar experience. I remember every mistake I’ve made and every loser stock I’ve invested in (all humbling experiences). I go back and try and figure out where I went wrong, what I didn’t see that the rest of the market did. Or why my investment thesis didn’t pan out as I expected. All in an effort to not make that mistake again.

But sometimes when you go back to figure out what went wrong with the investment, you find that maybe you weren’t exactly wrong… just didn’t execute correctly.

Take former holding Chipotle Mexican Grill (NYSE: CMG) for example. Longtime readers will remember that I recommended this stock back in 2017. The company fit my “crisis” investing thesis perfectly (or so I thought).

The fast-food chain had just suffered a food safety scare that started in late 2015. Hundreds of customers fell ill after eating at its restaurants. The food crisis caused shares to tumble from around $750 per share in October 2015 to around $400 in January 2016, a 45% loss.

But I thought those days were behind it. The company had closed stores, cleaned house, and the Centers for Disease Control (CDC) had wrapped up its investigation. It declared the outbreak over in February 2016 — more than a year before I recommended the stock in May 2017.

Before its food crisis, Chipotle was on a growth tear. Sales and earnings were growing like a weed, and the company was churning out free cash flow. In 2017 — and with the outbreak behind it — I thought Chipotle would return to its growth days. And it did… but not without some headache for shareholders first.

The company had another round of ill customers pop up at a few stores, and investors treated it like its food crisis was starting all over again.

Shares tumbled, and I ended up closing out of the investment 12 months later for a 36% loss. I was bummed. Just like getting stuck on that rock in the river, my pride took a hit and it was humbling.

But it turns out that my original thesis wasn’t wrong, it was just bad timing and execution. The company did return to its growth days: 2016 — during the real food crisis — is the only year the company has posted negative earnings and sales growth.

Had I waited it out a little longer (or if I still held shares today) we would be up 137% on my Chipotle recommendation. 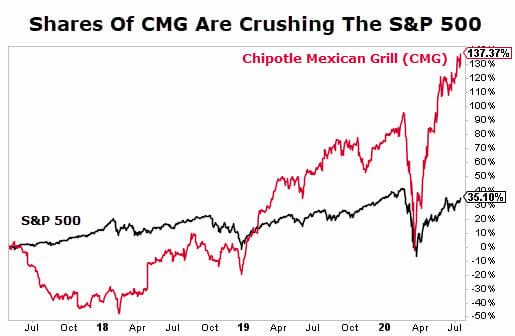 Granted, hindsight is 20/20. There’s no way to know for sure if I would have exited the stock in 2018 when it made it back to our entry price. And we don’t know if we would have survived the gut-wrenching drop the stock recently saw in March from the pandemic.

I’ve said this before, but sometimes it’s better to cut losses and move on. You never know if shares will rebound or continue to drift lower. Especially, in a consumer cyclical stock like CMG.

Nobody likes to be wrong, especially when it comes to their money. But what’s important about episodes like this is what you learn.

I want you to think about this as you examine your portfolio during this unique time in market history. Look at the current losers in your portfolio and ask yourself… was my idea right, but with poor planning and execution? If so, then it may be worth holding onto the stock.

In other situations, this may not be the case.

Editor’s Note: It’s totally under the radar right now, but I’ve found what could be the most lucrative opportunity in years…

I recently found a small satellite technology company that paid a measly $26 million for a tech startup in 2019. And it could turn out to be the deal of the decade. That’s because the implications of the technology it acquired are huge…

Right now, analysts on Wall Street are completely ignoring it. That’s because they’re too fixated on the short-term. But if you learn about this opportunity now, you could be the one laughing to the bank.