Yes, There Is Still Value In This Market…

It seems like ages ago, but it’s only been six months.

On February 19, I told readers of my High Yield Investing premium newsletter about the virtues of Dividend Aristocrats. I went on to recommend one in particular that has since given us a positive return of nearly 14%.

As it turns out, that issue would be the last “ordinary” issue of that newsletter before the Coronavirus turned the world upside down.

Covid-19 was officially declared a global pandemic on March 11 and has been driving the market ever since. I remember it well, having sent out an email alert that very same morning following a 2,000-point Dow free-fall at the opening bell the previous day.

In any case, returning to that February 19 issue, the S&P 500 had just settled at 3,370. Today, as I write, the index is trading at 3,375. In between, there was a chaotic pattern of ups and downs as sentiment shifted to the latest news. But six months later, we’re pretty much right back where we started. 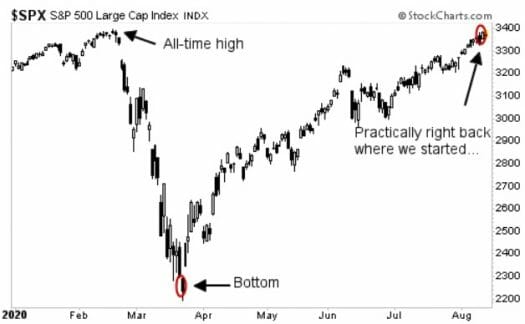 I can tell you that most of my holdings across a wide variety of industries are still well below their pre-Covid levels. In fact, a quick stock screen reveals that while the S&P itself is near a record high, more than 1,800 large-cap stocks are languishing 20% or more below where they were trading six months ago.

Remove the mega-cap FAANG group (Facebook, Amazon, Apple, Netflix, and Google) from the picture, and it’s clear that most stocks are still struggling to recoup losses and make any real headway.

The Truth Behind The Market Rally…

The stock started the year near $10, plunged below $3.50 during the March selloff, and has since recovered to the current price of $7.40. That’s a powerful bounce – but it will take another 30%+ advance from here just to return to pre-Covid levels. 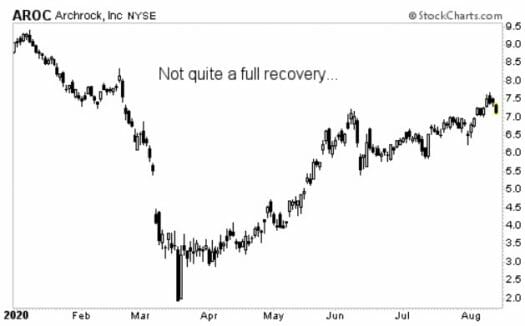 But how is business faring? Well, conditions deteriorated rapidly early in the year, forcing many customers to put their natural gas compression equipment on standby. But with gas production picking back up, utilization of Archrock’s fleet now stands at 86% — just slightly below the 88% from a year ago. And with more horsepower for rent, contract operations revenue has actually risen slightly, to $187.9 million last quarter from $186.2 million.

A few customers have deferred maintenance spending. Still, by these metrics, the business looks a lot like it did 12 months ago – you could argue that it’s even stronger. Yet, the stock is trading at a wide 25% discount from where it started the year.

Has the balance sheet weakened? Nope. Quite the opposite. Archrock has already made substantially all of its planned 2020 capital expenditures and has been plowing cash flow into debt reduction, eliminating $8 million in borrowings. The firm’s leverage ratio has improved from 4.4 times annual EBITDA to 4.1.

As for dividends, the $58.0 million in cash available for distribution (CAD) last quarter was enough to cover the $22.2 million in declared dividends 2.6 times over. That compares to a coverage ratio of 2.5 this time last year.

In other words, Archrock’s dividend yield of 7.9% is on firmer ground now than it was before Covid. But you wouldn’t know that by looking at the stock chart.

The point is that there are many, many examples like this. It helps explain why I believe there are still pockets of value in a market that, overall, has become quite expensive relative to earnings. I’ve been seeing money flow out of pricey tech stocks and into dividend payers that have been left behind – a long-overdue rotation, in my opinion.

Hopefully we’ll see more of that pattern in the weeks to come.

In the meantime, I want to tell you about my brand new a very special event I’m hosting next Tuesday…

For the first time since ever, I’m going to lift the curtain on the one hidden asset that’s about to attract $4 trillion of cash from America’s richest CEOs. These powerful insiders have pinpointed a future bonanza — and they’ve decided to go “all in.” This is your chance to join them.

To lock in your free spot for this special event, go here now.