Making Sense Of The Booming Market When The Data Is Terrible

Don’t look now, but the S&P 500 is right back near its February 19 high. That means, since bottoming March 23, the market has rallied an incredible 51% and is now up about 5% year-to-date.

All this despite the fact that we’re still in the midst of a global pandemic and recession. 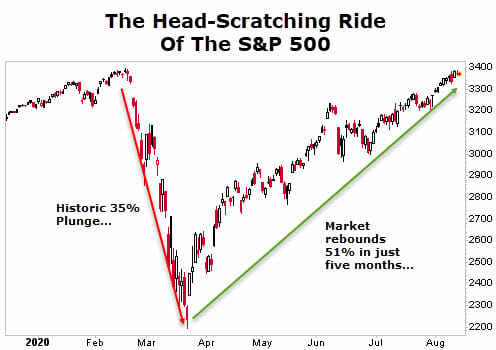 But regardless of why the market has overcome the dismal economic data and the health pandemic, I hope that you were able to weather the swift and sudden collapse in stocks. I hope you didn’t panic sell when things were at their worst.

For instance, I recommended the homebuilder Lennar (NYSE: LEN) in my March issue of Top Stock Advisor. It couldn’t have been worse timing. But this is a testament to why it’s important to buy wonderful companies at fair prices.

Despite the terrible start — shares tumbled nearly 50% in the two weeks following that issue — shares have rebounded and we are now back in the green (up roughly 35% since my original recommendation). 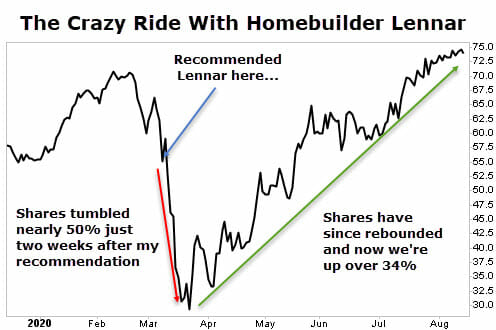 I remain bullish on the housing market in general. After all, you can now borrow money for 30 years at less than 3%. That’s incredibly cheap. Plus, with the Federal Reserve printing so much money, which theoretically makes the dollars in our savings accounts worth less, I can see people choosing to use that cash to invest in physical assets like land, homes, and commodities.

Although as a quick side note, if you’re looking at building a new home you might want to wait until lumber prices settle back down. Lumber prices are at all-time highs, having passed their previous record high set back in 2018. 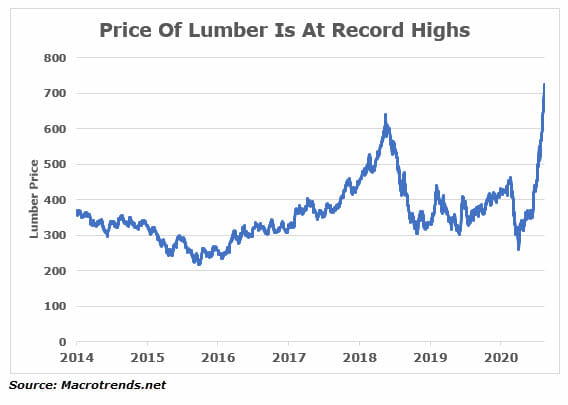 Things Aren’t Great, But Definitely Not As Bad As They Seem…

So how do you square all of this, for example, with the recent (terrible) GDP numbers?

Economists said it was going to be bad… but when the official Gross Domestic Product (GDP) figure came out and it showed an astonishing 32.9% drop in GDP, I was alarmed.

As I’m sure, many of you were just as troubled by the number, it seems the market didn’t give it much thought. Stocks brushed it off and continued to climb to new highs.

Never have we seen the economy contract by one-third in three months. Here’s what it looks like on a chart… 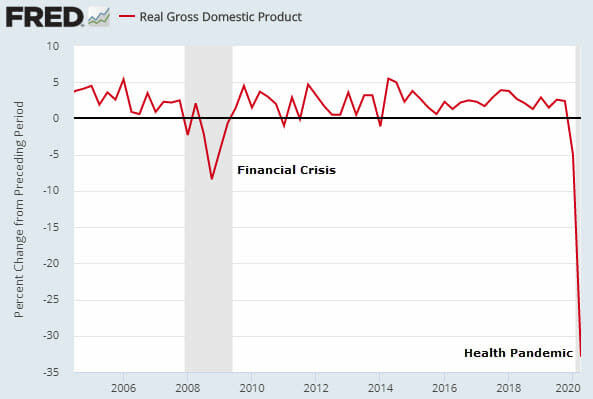 The mainstream media, as well as many politicians, used this number for their benefit to prove just how terrible of shape our economy is in. And there’s no arguing that we’re in a recession, that businesses and individuals are struggling, but I don’t think this number paints the correct picture.

Don’t get me wrong, that’s still a big number, but not nearly as bad as what I saw many headlines scream.

In short, GDP figures are annualized. The report of 32.9% is not only meaningless but highly misleading.

At year-end, when all GDP figures are accounted for, and not annualized, we will likely not see anything close to the 32.9% drop that was reported. For instance, Morgan Stanley expects full-year 2020 GDP to be down only 5.3% year-over-year.

What I’ve learned is that annualized quarter-over-quarter changes are useless. I also learned that most other major economies do not report annualized changes to GDP. For instance, the EuroZone reported a 12.1% contraction in the second-quarter GDP compared to the first three months of the year.

I point this out because as investors when we see such alarming headlines and markets continuing to cruise higher, it makes us question the market’s rise, which is good. I think it’s always good to be questioning things. But perhaps the market is cruising higher because it’s actually digesting the 9.5% GDP contraction versus the more heavily used 32.9% number.

It’s Okay To Take Profits, But Keep This In Mind…

Regardless, if you’re worried about the surging market on dismal economic data, then go ahead and book some gains. After all, we just witnessed the stock market tumble roughly 35% in March. Investors have a right to be worried.

That means if your portfolio value was $250,000 towards the end of February and it was invested in the broader market, you woke up March 23, logged into your brokerage account, and saw your portfolio value sitting at $165,700. Nearly $100,000 of your money — gone. Disappeared. Vanished. In just four weeks.

But just keep this in mind… If you remained invested, you’ve recouped that $100,000 in just five months. That’s incredible.

Just think back to the last financial crisis. Folks had to wait five years to get back to even. Most never made it. They folded and booked their losses.

So again, take some profits if you must. Move some money towards cash if you’re concerned.

But there will always be opportunities out there for those who are willing to be bold in the face of uncertainty.

For example, my colleague Nathan Slaughter has booked gains of 46%, 88%, and 170% from his trades during this pandemic. And it’s all thanks to his secretive project, code-named “Rainmaker“…

Nathan just ripped the lid off of a story, telling how America’s CEOs are about to plow $4 trillion into a “hidden” market over the coming months — and how he’s going to use Rainmaker to profit.

You can get all the details and sign up for his emergency briefing right here.