My Top Pick For A Travel Rebound

My home state of Louisiana is often referred to as the “sportsman’s paradise.” And as you can imagine, I’ve heard my fair share of fishing stories in my lifetime.

But nothing compared to an amazing video I watched recently…

It showed a 550-pound Mako shark, one of the ocean’s most ravenous predators, being reeled in by fishermen. Before they could land the fish, it was attacked at the boat by an even larger 1,000-pound Tiger shark, which left behind nothing but table scraps.

Why do I bring this up? What’s my point?

That’s certainly true in the business world as well.

Dealogic reports that there were 34,482 merger and acquisition deals globally in 2019. The number of mega-deals ($10+ billion) climbed 8% to 43, the highest since 2015. According to financial data provider Refinitiv, the value of all those takeovers reached $3.9 trillion last year.

Buyers are always more motivated to go shopping when there are deals to be had. And the Covid-19 pandemic has created a major catalyst for more deals to occur in the coming months. So if you’re a CEO or private equity manager with vaults of idle cash waiting on the sidelines, this is an opportune time to pounce.

And before you think the market’s rally would discourage potential acquirers from snapping up other firms, think again.

For one, borrowing money is cheap, thanks to the Fed. Second, the market’s gains have been uneven. While all the major indexes have eclipsed their former highs pre-Covid, there are many stocks in many sectors that are still below their pre-pandemic highs.

The travel sector is one obvious area that comes to mind.

I’ve Betting On A Travel Rebound

With a market cap of about $3 billion, TripAdvisor (Nasdaq: TRIP) has devoured over a dozen smaller rivals in recent years. That includes MyTable, a popular restaurant-reservation platform, and Viator, where travelers book local tours and activities. In the process, it has built an impressive portfolio of online travel brands.

So what exactly does TripAdvisor do?

Well, if you’re a frequent traveler, then you may have visited the website to help plan the perfect trip. Looking for the highest rated five-star resorts in Honolulu? The best dining options in Santa Fe? The most luxurious spa treatments in Madrid? The most affordable Mediterranean cruises? They’re all in there.

TripAdvisor has accumulated 860 million unbiased reviews, which can be invaluable to travelers (especially those visiting an area for the first time). Travelers also visit to book a wide range of activities… white water rafting, private wine tastings, deep-sea fishing… you name it.

TripAdvisor plays host to 395,000 unique bookable experiences in cities around the globe. In an average month, the site attracts about 460 million users – dwarfing the 19 million at Trivago – in 28 different languages.

And the company is effectively monetizing all that site traffic. TripAdvisor helped influence 433 million trips globally last year representing $520 billion in travel spending. As you might expect, those numbers attract plenty of digital advertising dollars from hotels, car rental chains, and countless other customers.

Of course, travel came to a screeching halt worldwide in March and April. And it’s only now in the early stages of a tepid recovery.

As expected, TripAdvisor’s second-quarter results were uniformly bad. The company took in just $59 million in revenue, a drop in the bucket compared to the $422 million from the same quarter last year. Earnings were deep in the red.

But under the circumstances, year-over-year comparisons don’t tell us too much. I’m more interested in sequential trends from one month to the next. In that regard, there is a tepid (but very real) recovery underway.

But in April, site traffic plunged to just 33% of normal. Fortunately, that figure rose to 45% in May and 60% in June. That’s an upward trend I like to see.

What’s important to understand is that this sector is trading largely on expectations right now – and I’m betting that the market is under-estimating the pent-up demand for vacations and getaways.

Travel search activity (and consumer surveys) would seem to confirm that. 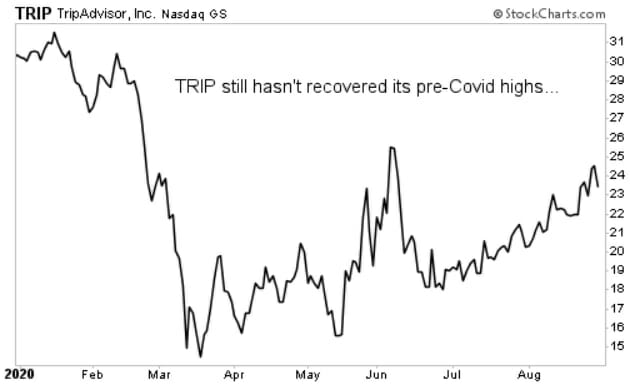 Despite its history of acquiring smaller rivals, TripAdvisor itself would make little more than a light snack for a larger player in this competitive pond. It has been frequently cited by credible analysts at firms such as SunTrust as a likely target.

You might think of Expedia (Nasdaq: EXPE), which has already feasted on numerous other travel sites and metasearch firms. It paid $280 million for Travelocity, shelled out $1.6 billion for Orbitz, and parted with $3.9 billion to gain control of property rental site HomeAway.

But I don’t see Expedia as a bidder here. In fact, Expedia spun off TripAdvisor nearly a decade ago and soon after took an ownership stake in rival Trivago.

A move by Booking Holdings (Nasdaq: BKNG), however, wouldn’t be a surprise. The owner of Priceline.com, Kayak, OpenTable, and other sites facilitated $96.4 billion in travel reservations last year. TripAdvisor would be a perfect fit. I also wouldn’t rule out a bid from Google (Nasdaq: GOOG), which is developing its own travel review and booking arm.

Global travel is a massive, and fragmented, $1.7 trillion annual industry. And online penetration rates continue to rise, benefiting entrenched leaders such as TripAdvisor.

TRIP may not revisit former highs in the $80s, but this business is conservatively worth $30 per share. Potential buyers might be willing to pay even more.

It’s still a long road back for the travel industry, which found itself in the crosshairs of the Covid-19 pandemic. But the dramatic slowdown is reflected in TRIP shares, which are trading at just one-third of their pre-crash highs above $60 from a couple of years ago.

P.S. My colleague Dr. Stephen Leeb has recently discovered a company that’s sitting on what could be the largest gold deposit ever discovered…