The Booming Sector You Need To Look At Right Now…

Have you noticed that the drive-thru lines seem to be longer these days? There’s good reason for that.

With many dine-in lobbies still shut down for Covid, customers have no choice but to take their meals to-go. One popular fried chicken spot near my house routinely has more than 15 cars waiting at all hours of the day, with a line stretching out of the parking lot and into the street.

Their chicken is good, but not that good.

As an inpatient customer, I hate waiting behind a dozen other people. But as an investor, I can’t help but appreciate the never-ending stream of vehicles, even at non-peak hours. They just keep pulling in — one after another — from open to close.

That patronage stands in stark contrast to many other struggling businesses, like retailer Steinmart – which just called it quits after more than a century.

There are some big cultural divides in America: Ford vs Chevy, Coke vs. Pepsi, Cubs vs. Cardinals, the list goes on…

But one of the most divisive topics just might involve the argument over the best burger and fries combo. Is it McDonald’s? Burger King? Wendy’s? Or maybe none of the above. Whataburger is the undisputed king of Texas. Out West, the crowd favorite is In-N-Out Burger.

I prefer to do most of my own cooking and don’t indulge in fast food too often. (Even then, I’m partial to tacos or sandwiches.) Still, sometimes you are on-the-go and need something quick. That’s why I found myself waiting in the drive-thru line at Sonic the other day. And waiting…

Investors would be wise to give the quick-service restaurant (QSR) sector a good, hard look. For one, it is largely immune to economic shocks. In fact, it can be counter-cyclical. The worse things get, the more inclined people are to eat off the value menu. During the brutal recession of 2008, for example, McDonald’s (NYSE: MCD) sales growth accelerated from the prior year.

The pandemic has brought many industries to its knees. But it never dampened our collective appetite for a quick meal served in a brown paper sack. Once state lockdowns ended, the lines returned almost overnight.

But isn’t the industry saturated? Weren’t all the growth opportunities exhausted long ago? Not exactly. People said the same thing a decade ago when McDonald’s had 33,000 stores and $70 billion in annual system-wide sales. Today, the store count stands at 40,000 and sales have steadily marched to $100 billion.

That’s an average increase of $3 billion in sales per year — a lot of Big Macs.

Over the years, guest counts have steadily risen from 40 million per day to 50 million to 60 million. Today, McDonald’s will serve about 70 million hungry customers. And another 70 million tomorrow.

That growth has fueled a dependable streak of dividend hikes that date back to 1976. Just over the past 10 years, quarterly distributions have marched from $0.55 to the current $1.25 per share – an increase of 130%. Meanwhile, efficiency initiatives, technological upgrades, and other operating improvements have fattened the bottom line, propelling the stock from below $75 to a current peak of $210. 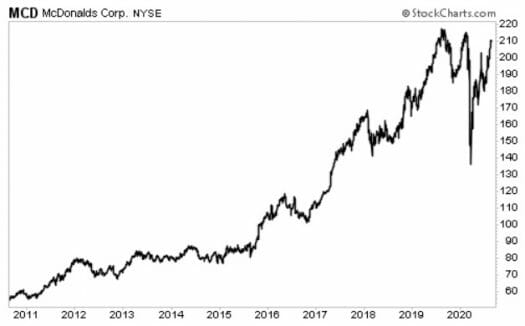 I’m Looking Beyond The Golden Arches

But this isn’t really about Mickey D’s. Yes, it may be the world’s largest and most recognizable dining chain, with a footprint in more than 100 countries worldwide. But it’s by no means the fastest-growing.

Sales across all owned and franchised locations rose 4% last year – a fraction of the 20% to 30% growth pace of up-and-coming chains such as Jersey Mike’s Subs, Raising Cane’s, and Shake Shack.

McDonald’s isn’t the highest-grossing per store either. That honor goes to Chick-Fil-A, which rakes in about $4 million in annual sales per location, handily beating the $2.6 million for the average Golden Arches unit.

And yet, stockholders haven’t exactly been suffering. The same can be said for Yum Brands (NYSE: YUM). The owner of Taco Bell, Pizza Hut, and KFC has tripled in value over the past ten years. 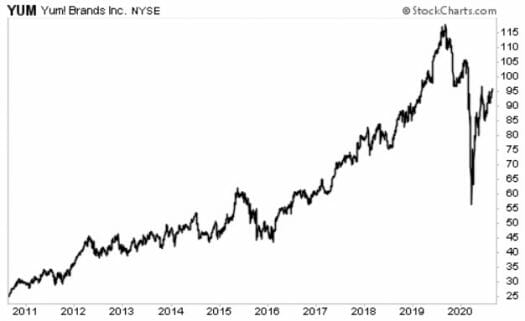 That’s despite the well-known competitive pressures in this field. There are very few barriers to entry in the QSR space, which is why the U.S. is now home to more than 200,000 fast-food joints hawking everything from burritos to sushi. That fierce competition can stifle operating margins, constantly culling weaker players from the herd.

But the big are getting bigger. And they enjoy unwavering demand for their products. Fast-food spending in the U.S. is approaching $300 billion annually – over $1,000 per person – to say nothing of under-penetrated foreign markets. 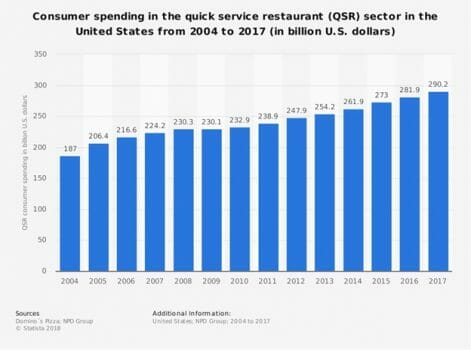 To be sure, some nutrition-conscious consumers are making an effort to watch their calories. But fast-food restaurants have responded to that trend by introducing salads, wraps, and other healthier fare. In any case, the steady uptrend in the chart above isn’t likely to show any directional changes over the next few years. Over 50 million Americans visit a fast-food restaurant each and every day.

A few names in this space have already recovered most (or all) of the ground lost during the Covid-selloff. But this is still a sector worthy of further investigation.

In fact, overblown pandemic fears have left my favorite player in this field trading at a sharp discount – even as its dividend climbs to new highs.

In the meantime, I recently went on camera to reveal a startling development…

I’ve lifted the curtain on the one hidden asset that’s about to attract $4 trillion of cash from America’s richest CEOs. These powerful insiders have pinpointed a future bonanza and they’ve decided to go “all in.” If you watch my latest presentation and to learn just exactly what they’re up to, you could end up reaping huge market-beating gains.