2 Solid Picks In The Energy Patch

It has been a turbulent year for the energy sector, to say the least. Just a few months ago, crude oil futures contracts dipped into negative territory for the first time ever as the global economy shut down and oil demand came to a screeching halt.

Fortunately, the wheels of commerce are spinning again, and oil is an important lubricant. Just since the beginning of May, benchmark West Texas Intermediate (WTI) oil prices have doubled from $20 to more than $40 per barrel. 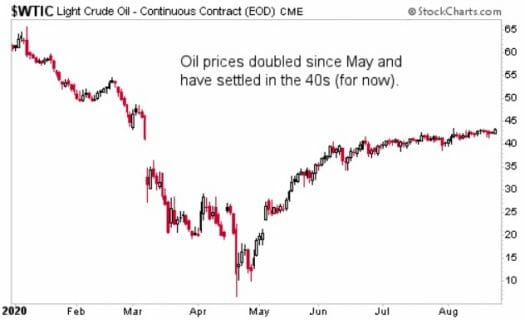 Investors may be looking for an “all clear” signal to get back into the energy sector. But the picture is complicated – some producers are showing resilience while others are in trouble.

That’s why today I want to spend some time looking at two of my favorite energy names. If you’re looking to invest in the energy space, this should give you a good idea of where pockets of opportunity lie.

ConocoPhillips (NYSE: COP) fetched an average realized sales price of just $23 per barrel. That’s less than half of the $50 it pocketed this time last year. To compound matters, management curtailed production by 225,000 barrels per day.

That was a shrewd decision, considering oil is more valuable now than it was back in April and May. Still, the combination of falling output and weaker prices knocked earnings back to $0.3 billion last quarter, or $0.24 per share – versus $1.40 per share a year ago.

And that’s with the help of a one-time realized gain from an asset sale.

In any case, the market is looking ahead to the second half of 2020 and beyond. ConocoPhillips has already taken its foot off the break and is now pressing firmly on the accelerator, ramping up production in key basins from Texas to Alaska.

And while some of its peers are in a liquidity crunch, ConocoPhillips has a rich balance sheet brimming with $7.2 billion in cash and marketable short-term securities. So when an opportunity came along to expand its footprint in Canada’s Montney Shale, it pounced.

The company has just unveiled plans to acquire 140,000 acres from a small regional producer for $375 million. This land, directly adjacent to the firm’s existing hunting grounds north of Vancouver, British Columbia, is already spitting out 15,000 barrels of oil equivalent per day – and management has pinpointed 1,000 additional drilling targets.

Geological surveys have identified over 1 billion barrels of resources in place, at an acquisition cost of less than $3 per barrel based on the purchase price.

Pioneer (NYSE: PXD) produced 375,000 barrels of oil equivalent per day last quarter. Average realized sales prices were… soft. Okay, they were terrible. The company fetched just $23.16 per barrel, less than half the $55 per barrel rate from this time last year.

Fortunately, those figures don’t include the impact of protective hedges, which helped put a guaranteed floor under much of the firm’s daily output. And even in this worst-case scenario environment, Pioneer still managed to generate $328 million in positive operating cash flow for the period.

That may prove to be the low-water mark for this cycle, considering benchmark West Texas Intermediate (WTI) crude prices have improved meaningfully since the end of June.

Equally encouraging, Pioneer continues to make great strides in the efficiency department. In fact, the company has shaved approximately $1.8 million in costs off the average well (a savings of 20% of what was originally budgeted), and it placed 75 new horizontal wells under production for the quarter.

Some of those savings stem from deflationary expenses in the oilfield during the crash, which may prove fleeting. But management believes the bulk of these savings will be retained going forward. The company is also curtailing production at wells with poorer economics.

Yet, the overall production outlook for 2020 has been lifted.

Other producers are scaling back during these uncertain times. But COP is confidently forging ahead with acquisitions that meet its tightened criteria. With current production of close to 1 million barrels per day, this addition won’t move the cash flow needle too much. But it effectively doubles the firm’s position in the liquids-rich Montney Shale.

In the meantime, COP pays $0.42 per share in quarterly dividends – and October could bring another hike. For now, at current prices, the stock yields 4.4% — more than double the market average.

As for Pioneer, its latest filing was music to my ears. It specifically emphasized management’s commitment to reorient its goals to prioritizing free cash flow generation and return of capital.

Investors are beginning to appreciate more disciplined spending and companies drilling within their means. Between regular dividends, variable distributions, and steady earnings growth, the company is targeting 10% annual returns for stockholders.

Of course, that’s only if a potential buyer doesn’t come knocking. Pioneer owns prime acreage in the heart of the Permian Basin. For now, the company expects to keep two to three fracking fleets on standby and as many as eight drilling rigs.

The market has responded warmly to the latest results, driving the stock to a current price of $105. If you’re willing to accept a lower yield, this stock could have substantial upside in the coming months.

Editor’s Note: If you’re hunting for income, then it pays to look beyond the usual suspects…

That’s what my team and I do each month over at High-Yield Investing. In fact, many subscribers are earning thousands in extra income each month — enough to live a comfortable, worry-free retirement. If you’d like to learn more about my service and get my absolute favorite high-yield picks, go here now.